How to Throw a Romantic Greek Dinner Party 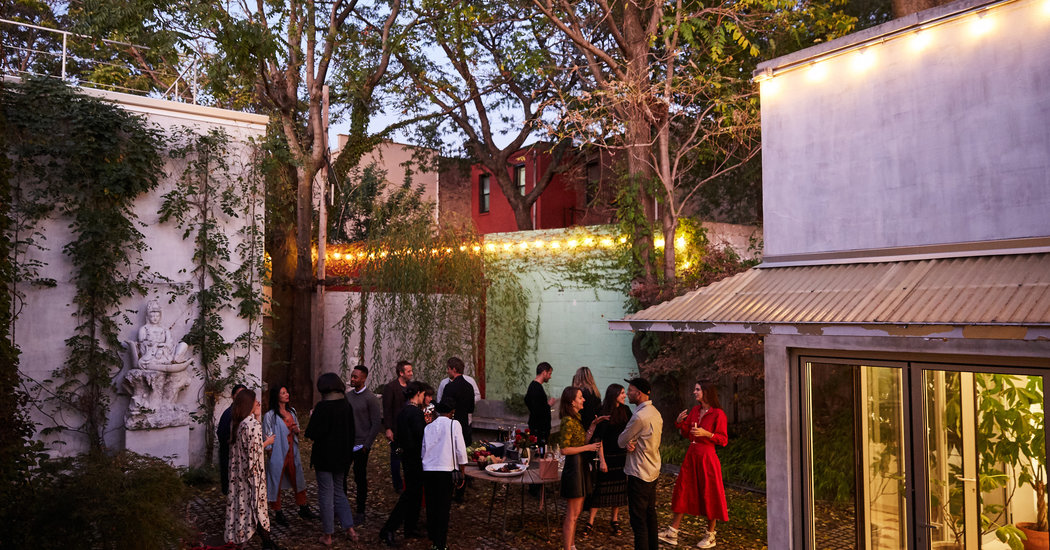 On a recent fall evening in Red Hook, Brooklyn, the sky was shifting colors quickly, from blue-gray to violet, and then swiftly, it was dark. Assembled in the verdant courtyard of the ceramist Cassandra MacLeod’s studio were the friends of the chef Mina Stone, who last week opened her Mediterranean-inspired restaurant Mina’s at MoMA PS1 with her husband, Alex Eagleton. Open bottles of natural Greek wines from the specialty Greek importer Eklektikon sat in an ice bath on a circular wooden table, alongside sliced cheese, apples and dried figs. Stone had been hard at work at MacLeod’s studio all week, cooking and photographing dishes for her second cookbook. Her first, “Cooking forArtists” (2015), was about her experience working with the art dealer Gavin Brown, at whose gallery and home she cooked large dinners after openings, as well as working with the artist Urs Fischer, for whom she prepared studio lunches.

Cooking was also how Stone fell in love. Eagleton, like Stone, is Greek, and when the two first met, they agreed they could never find the kind of Greek food they knew and loved. They got together to cook the dishes they liked to eat with their families. It was innocent, or at least to Eagleton. “Let’s just say that one of us was the fish, and one of us was the fisherman,” he jokes. “I was the fisherman!” Stone adds with a laugh.

In MacLeod’s candlelit studio, decorated with small bud vases filled with dahlias, and over several courses, Stone thanked everyone who had gathered there that night to celebrate with her: artists such as Maia Ruth Lee, Sarah Crowner, Elizabeth Jaeger and Chris Dorland; the new MoMA PS1 director Kate Fowle; the writer Nick McDonell; and other longtime friends such as the cook and author Julia Sherman and the curator and producer Eliza Ryan. Eagleton placed — not so surreptitiously — bottles of ouzo and mezcal on the table to coax the night along, and guests lingered on the studio’s balcony until late, as MacLeod’s black cat, Pineapple, slinked around the shadows. Below, a guide to how to throw a casual but artistic Mediterranean-inspired dinner like Stone’s.

Fresh Ingredients Can Be Transporting

Greece is a huge influence on Stone. She and Eagleton spend much of their summers on Paros, an island in the Cyclades so famous for its chickpeas that it holds a festival celebrating the humble legume every July. Stone’s mother’s side of the family is from Pireas, a port city on the mainland, and Eagelton was born and raised nearby in Athens. The Greek food they cherish is deceptively simple, in part because the ingredients often are common but of the highest quality. Stone likes to buy her olive oil, feta cheese, olives and yogurt at the Greek specialty market Titan Foods in Queens. She prefers to use lemon juice to dress her dishes instead of vinegar — “it adds a cleaner sensibility,” she says. Same goes for her tzatziki, which she makes out of Fage yogurt, grated cucumber and garlic and drizzles with some fresh lemon juice (for more sensitive types, she recommends placing a peeled garlic clove in the tzatziki to let it absorb some of its flavor, removing the clove before serving). Stone’s vision is bound less by authenticity and more by the idea of serving an experience that mirrors how Greek families eat together. Many items she’s serving at Mina’s, like mezzethaki — essentially a shot of ouzo with a snack, though Stone is serving the snacks separately from the beverage — embrace the concept. She says: “I think it would be appropriate to have a spot where you can get great Greek food and it doesn’t serve just fish or gyros; it’s what you would get if you went to a home in Greece, such as lentils or chickpeas or what is traditionally seen as a kind of impoverished cuisine.”

Dinner was served in two courses: First came the freshest Greek salad I had ever tasted (the last of summer’s tomatoes, red onion, cucumbers, mint, green pepper and oregano topped with barrel-aged feta imported straight from Greece), a sesame-encrusted bread called koulouri, fresh olives, melitzanosalata (an eggplant dip with lemon juice and parsley) and tzatziki. Then arrived steamed broccoli rabe drizzled with lemon juice, roasted beets with vinegar and braised chicken with lemon and potatoes. Nearly all the ingredients were sourced from Essex Farm, located in upstate New York. There was a simple pleasure in eating the food in front of you, bite after bite, until it was magically gone. Stone told me of a Greek word, papara, which means ripping off a piece bread and dipping it in the oil and tomato juice of the Greek salad or mopping up the sauce from the pan for the chicken.

Let Your Food Tell a Story

Stone likes to work with a baker named Savannah Turley and had instructed her to “bake something sesame-y and seedy. If you want to braid it or do anything beautiful, please do!” So Turley began researching Greek breads and decided on koulouri, a street bread typically sold to people on the go in the morning. It is usually drizzled with sesame seeds, but it can also be stuffed with cheese, chocolate or tahini. It’s related to the Turkish bread simit (often called the Turkish bagel), and several versions of the O-shaped street food appear across the former Ottoman Empire. “This is one of the many things I love about bread,” Turley adds. “It has such a history and you learn so much about a culture by digging into their bread.” Stone’s own style of serving — of preparing everything in advance as much of possible — reminded me of the storytelling you find in the best kinds of cookbooks. She says: “I was thinking the other day about how a lot of Greek matriarchs get up at 8 in the morning, they make lunch, and it sits around on the stove until it’s lunchtime, and it’s briefly heated up and served and then paired with one other thing that you cut up at that time, like the salad. To me, that is something I apply to entertaining in my house. I like being able to have the thing that can be made ahead of time, heated up, and then the thing that you make right as you’re ready to sit.”

I’ve attended several of Stone’s dinners for Gavin Brown, and I remember being struck by her comforting stews, rice, beans and salads — in short, the unfussiness of it all. You often grabbed a bowl and stood in line and she ladled the food onto your plate, which you ate on your knees, sitting in a circle with other artists, curators and collectors. Stone’s cookbook has become a kind of guide for me at home, not just as an introduction to Greek food but also on how to cook for guests without going over the top. Her very first Gavin Brown dinner was inspired by the French art dealer Ambroise Vollard, who worked with artists such as Paul Cézanne and Pierre-Auguste Renoir at the turn of the 20th century. “[His dinners] would be in his basement, and it was at a time where this really wasn’t appropriate,” says Stone. “He would always make curry, and it would be artists and art dealers having dinner side by side, and that was the inspiration. It was a happy accident.” Everything about Stone’s ethos is geared toward creating an informal yet interesting atmosphere, one where it feels like having a home-cooked meal with outstanding company — just without being left to clean up the dirty dishes.

Dessert Can Be Decadent but Casual

To finish the meal, Stone served something few guests had tasted before, a kind of bread pudding called portokalopita that involves taking shredded phyllo pastry and baking it with yogurt, eggs, sugar, olive oil and orange rind. After it’s cooked, Stone pours an orange syrup over it. It was like a bread pudding, but it was also sort of like a sponge cake, and it was decadently delicious and utterly surprising — the zest of the orange mixed with the sticky sweetness of the sugar. Stone let dinner slowly settle with her guests, allowing everyone to mingle, chat or smoke cigarettes outside. She unceremoniously plopped down slices of portokalopita arranged in its own baking tin with some parchment paper along with a platter of sliced Fuji apples drizzled with mint and Greek honey (the bees feast on thyme nectar, resulting in a surprising kick) and let guests serve themselves. I ate mine, quickly, with my fingers. Soon, the dessert platters were depleted.