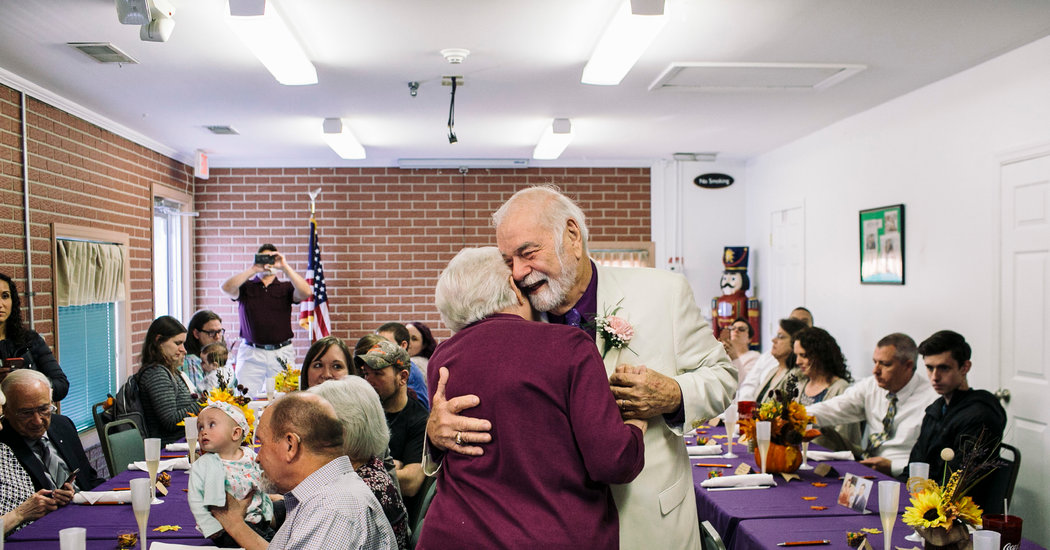 On the June day in 1956 when a young woman named Annette Adkins left Woodbridge, Va., to spend the summer with relatives in Kentucky, Bob Harvey lost the love of his life.

Mr. Harvey, who had slow danced with her weeks earlier at the junior prom, remembers seeing her get in a 1955 tan Pontiac, with a Marine Corps sticker on the bumper. She waved a shy goodbye out the back window as the car drove off and he wiped away tears.

It was if he knew right then and there he would have to wait 63 years for his next kiss with her.

Because a summer apart felt eternal, he sold his hunting rifle to fund his long-distance calls while she was away. But, within the month, and after only a few conversations, he ran out of money. He spent the rest of the summer waiting for her to return for the start of their senior year at Gar-Field High School.

When she did, it wasn’t the reunion he had wished for. And she would eventually be going by a new name as the wife of her newfound summer love, John Callahan.

When Mr. Harvey first met Ms. Callahan, she had just moved to Woodbridge to live with her cousin Betty Nichols at the start of their junior year. There hadn’t been much to do in her hometown Pikeville, Ky. “I couldn’t go to football games or really have a social life there,” she said. Woodbridge provided teenage intrigue almost immediately.

In study hall, all eyes were on the new girl. “I couldn’t take my eyes off her,” Mr. Harvey said. “She had auburn hair and a stunningly beautiful face and her eyes were just, wow.”

During one of her first few study halls, Ms. Callahan noticed Mr. Harvey passing notes to a girl she rode the school bus with, Shirley Pemberton. “One day I saw Shirley on the bus and I said, ‘Do you like Bob Harvey? I’ve seen you passing notes with him,’” Ms. Callahan said. “She said, ‘No, he’s passing me notes because he’s wanting to know about you.’”

Ms. Callahan, 80, now of Gahanna, Ohio, was thrilled. “He was handsome and tall and a football player,” she said. Still, when Mr. Harvey asked her to a school dance as a first date, she declined. “I came from a real small country town, and I didn’t know how to dance and I was shy.” She decided she would learn from the paperboy, a classmate who asked her to the same dance but wasn’t as compelling.

“I thought, I’ll go with him and learn to dance, and if Bob asks me out again I’ll be ready,” she said. “And then who was at the door collecting our tickets but Bob?” Mr. Harvey, heavy-hearted that she was there with another boy, asked Ms. Callahan to dance that night anyway. She said yes. “I was so timid I was trembling. I wanted him to like me.”

In that department, she needn’t have worried.

But when Ms. Callahan left that summer, their time apart loosened teenage heartstrings. From Kentucky, she journeyed to Miami Beach to stay with an aunt and uncle and there, she met Mr. Callahan, whom she would marry five years later.

When she returned to Woodbridge for senior year, Mr. Harvey was eager to make up for lost time. He approached her at her locker with his arms outstretched. “I said, ‘Bob, I met someone else. I’m sorry. I don’t want to date you anymore,’” she recalled. “Now it sounds unkind to me. But at that time I didn’t want to lead him on.”

Mr. Harvey was devastated. “I still loved her tremendously,” he said. “But being a Southern gentleman, I knew I had to respect what she said.”

They went their separate ways that school year, both feeling lonesome. Mr. Harvey only had eyes for Ms. Callahan. Ms. Callahan’s new boyfriend and future husband lived far away in Ashland, Ky. As the 1957 prom season swept in, though, another new girl arrived at Gar-Field High. “She had long red hair and freckles and looked like Maureen O’Hara,” Mr. Harvey said. Her name was Diane Swift. Mr. Harvey asked her to the prom. Two years later they were married.

Ms. Callahan and Mr. Harvey describe the ensuing six decades in much the same way. Though he settled in Woodbridge and had a son and a daughter, and she settled in Westerville, Ohio, and had two sons and two daughters, both lived what Mr. Harvey called typical, traditional married-couple lives. He worked as a Washington, D.C., parks police officer for 15 years before retiring in 1977 and becoming a middle-school teacher for 23 years, and has been a deacon at his church, Two Rivers Baptist in King George, Va., for 18 years. She became a nurse and worked at several hospitals while having children and relocating to cities including Nashville and Ashland for Mr. Callahan’s career in computers.

They married within two years of each other — he in 1959 and she in 1961 — and lost their spouses two years apart. Mr. Callahan developed vascular dementia and died in 2015. Ms. Harvey died of cancer in 2017.

While they grieved their losses separately, each made appearances in the other’s thoughts. Throughout his 60-year marriage, and despite what he called his “very real” love for his wife, Mr. Harvey kept Ms. Callahan’s high school photo in his wallet. And in 1972, when he heard that Gar-Field High was being torn down for renovations, he was upset that he hadn’t been told earlier. “If I had known, I would have gone there and bought the seat Annette and I carved our initials into in study hall,” he said.

In early 2018, Michael Candler, the son of Ms. Callahan’s cousin, visited Ms. Callahan in Ohio. He had found and developed an old, forgotten roll of film with shots of Ms. Callahan and Mr. Harvey posing on a couch, preprom, and thought she might like to see the photographs. Ms. Callahan was flooded with fond memories. “It came to me, looking at those pictures, that I had had so much fun with Bob,” she said. “I wanted to talk to him again.” She looked for him unsuccessfully on Facebook.

In August 2018, Mr. Harvey was diagnosed with bone marrow cancer. As he negotiated his cancer treatments, he wrestled with how he wanted to spend the rest of his life. “The lady who had been gentle on my mind for six decades became heavy, heavy, heavy,” he said. A 2019 Google search turned up Mr. Callahan’s 2015 obituary. “I hit the floor. I was like, Oh, God, she’s been a widow four and a half years. She’s probably remarried and I’ve lost her again.”

He was willing to take his chances. “I sent a donation to the palliative care unit that took care of John, and then I found a nice card of condolence and sent it to her with my name, address and phone number and signed it, ‘Thinking of you,’” he said. He had found her address through the church that held Mr. Callahan’s funeral. For eight days, he held his breath and waited. And then, on the evening of July 26, she called. “She said, ‘I’ve been looking for you and had given up ever hearing from you. Can you come to Ohio?’”

He told her he could be there by Sunday. He got up at 5 a.m. Saturday and drove 12 hours straight, stopping only for gas and to buy a bouquet of pink and white carnations when he hit Gahanna. When she answered the door, he knew what to do. “I had called my son, Bryan, and said, How do I do this? Do I just run up and plant one on her like it’s 1956? He said, ‘Go for it, Dad.’” So he did. “I handed her the flowers, and then I cupped her face in my hand and said, ‘Whether you like it or not, I’m going to kiss you.’”

Mr. Harvey spent a week in Ohio. Before he left, he asked Ms. Callahan to dance with him in her kitchen to Johnny Mathis’s “Chances Are” and the 2003 Alan Jackson hit “Remember When.” He told her he guessed she and her husband had danced a lot through the years. She told him otherwise. “My husband didn’t dance,” she said. “The last person I danced with was you.”

“My heart was beset,” Mr. Harvey said. “I am so much in love with this woman.”

Cancer treatments require Mr. Harvey to spend most of his time in Virginia, but since August he has spent 10 days per month in Ohio. On Aug. 27, a month after their reunion, he asked Ms. Callahan to marry him with a vintage 1950s diamond ring bought at his former wife’s favorite jewelry store in Fredericksburg, Va. By then, he knew Ms. Callahan’s children approved.

“At first the whole story of them seemed surreal,” said Becky Craft, Ms. Callahan’s youngest daughter. “But the more time we spend with Bob, the more we realized how much they enjoy each other

The engagement, during a picnic at Alum Creek State Park Beach in Lewis Center, Ohio, which is near Ms. Callahan’s home in Gahanna, didn’t bring tears to Ms. Callahan. “But Bob may have cried,” she said. “He’s very tenderhearted.”

On Oct. 19, Ms. Callahan and Mr. Harvey were married at Central College Presbyterian Chapel in Westerville by the Rev. David Redding, a Presbyterian minister. Ms. Callahan wore a purple cardigan and purple slacks that she said complemented her white hair. Mr. Harvey wore a white sport coat with a pink carnation, and in a nod to the era that united them, shiny penny loafers. After a brief ceremony before 17 friends and family members during which Mr. Harvey choked up twice, the couple joined 32 guests at the Nutcracker, a 1950s-themed restaurant with jukeboxes and padded booths in nearby Pataskala, Ohio.

Most of the couple’s combined 14 grandchildren were in attendance; a few had been instructed by Mr. Harvey to bring a CD player so he could dance with his bride to Johnny Mathis.

“We didn’t want any jitterbugging,” said Mr. Harvey, who will sell his house in Virginia and move to Ohio in the coming months. “At our age, we don’t want to risk getting hurt.”

Dancing Again Mr. Harvey and Ms. Callahan entered the Nutcracker restaurant after the wedding ceremony holding hands to “Chances Are,” by Johnny Mathis. As they made their way down the steps, Mr. Harvey pulled Ms. Callahan close. The couple slow danced for the crowd before sitting down, Mr. Harvey whispering and softly singing the lyrics.

Sweet Memories Guests chose between spaghetti and garlic bread or roasted chicken for dinner. Later, the waitresses served a wedding cake shaped and decorated like a traditional Wurlitzer jukebox.

Like Old Times “I feel happy again,” said Ms. Callahan just after the ceremony. “I was alone for a while and was very lonely. I feel like I have a purpose again. It feels like no time has passed.”

FacebookshareGoogle+sharePinterestpin it
Emma Thompson Can’t Live Without Hannah Gadsby and Potato SconesHappy Friday! What if You Always Had It Off? Why Don’t You?
Latest