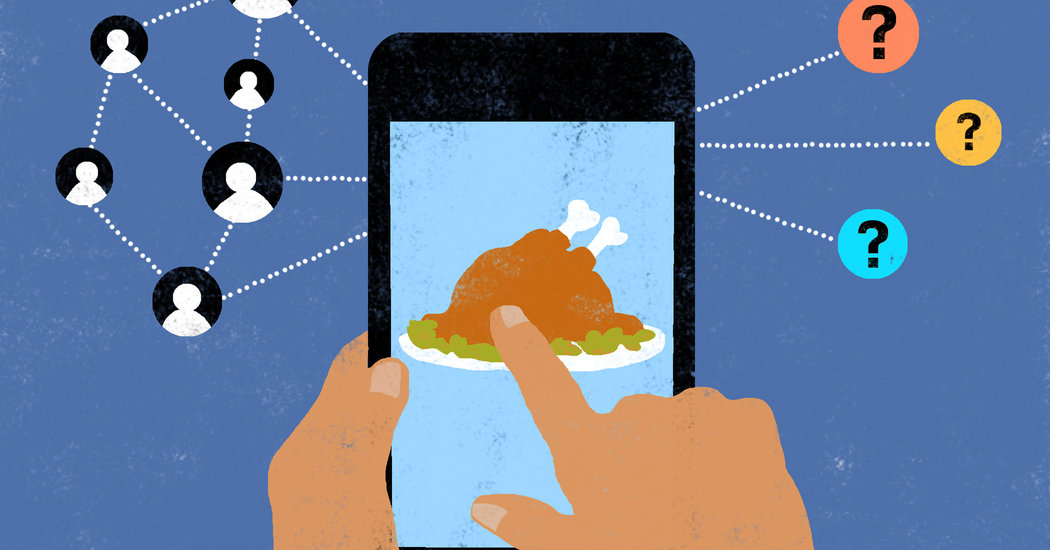 Last year, Adam Naor and his girlfriend placed an ad on Craigslist inviting strangers to Thanksgiving dinner in their apartment in the West Village neighborhood of Manhattan.

“There was no prior research, it wasn’t a trend we wanted to be part of,” said Mr. Naor, 32, who works for Indeed, an employment search engine. “We were just talking about how we could give back and be part of a community.”

His family was in California. Hers is in Germany. “We wanted to extend an invite to anyone that is alone, widowed, or without family so that you can have a more social dinner and enjoyable holiday,” the ad read in part.

Within hours, they said, they started receiving responses. They communicated with four candidates, and extended an invitation to the two who seemed more forthcoming.

“We had a single man in his 60s, and a widowed woman in her early 50s,” Mr. Naor said. “I don’t remember much about them except how good it felt. It wasn’t one of those Thanksgivings where you stay and play football all day. It lasted for two hours, but we were all very grateful. There was a sense of empathy, of connection.”

In an era when technology has enabled dating, foreign home stays and regular old dinner parties, why not also that most familial and fraught of holidays: Thanksgiving?

Some hosts, like Mr. Naor, invite new people to join their intimate meals. Others are hosting large feasts aimed mostly at those they have never met.

These experiments can go wrong, with visitors feeling uncomfortable or ghosting. But the meals can also be joyful and meaningful. After all, interacting with strangers can be less stressful than with family.

Indeed some Americans are turning to strangers because they want to spend the holiday with like-minded individuals rather than their biological kin.

Jeesely Soto, 40, an accountant and school director in Phoenixville, Pa., is preparing a Thanksgiving feast for 50 guests, 20 of whom she has never met.

As a vegan, she doesn’t feel comfortable in her family’s house. In the past, relatives have commented on how weird it was for her not to eat turkey. On one occasion her son got very upset seeing the dead bird on the table.

So, three years ago she started a new tradition of inviting vegans, or those happy to not have meat, into her home for Thanksgiving.

Ms. Soto spreads the word through vegan groups on Facebook. It’s potluck style, and guests sit together around a large table. They take turns sharing what they are thankful for this year.

“I will be honest. The first time I did it, it was very weird,” Ms. Soto said. “But everyone was so happy, I did it again. It can be easier to get along with strangers, especially when it comes to veganism.”

One guest excited about attending this year’s dinner is Melanie Bartlett, 41, who works for the Philadelphia school district. She recently separated from her husband, and her daughter is spending the holiday with him.

“I’m in a place where I want to extend my community of friends,” she said. “People love to hate on vegans, but we are a solid group. I think I’m going to meet great people.”

When guests don’t have a common interest such as this, activities are key to help them get to know each other.

For the past five years Sara Scott-Hitchings, 38, a student in Burlingame, Calif., has invited people via Reddit to a communal Thanksgiving meal she calls Redditsgiving.

“But I don’t just use Reddit,” she said. “I literally invite everybody. I get 80-year-old ladies with nowhere to go attending from my synagogue. I just invited my Lyft driver yesterday.” This year she expects more than 80 attendees. Some participants donate money to help offset the cost.

For Ms. Scott-Hitchings, games, not turkeys, are the most important part of her meal. In the past she has provided a shuffleboard table, a pool table, board games, even an arts-and-craft station.

“At one point last year everybody was playing a dirty version of Pictionary called Disasterpiece,” she said. “Like the whole group. The 17-year-old to the 80-year-old. It was fun to see everyone getting involved.”

Still, it can be nerve-racking to head into a meal full of strangers.

Jeanette Green and her husband spent the first 45 minutes of Redditsgiving drinking wine in the kitchen before they worked up the courage to mingle. They were so nervous that they had even considered not attending.

“We were on the fence for a while, and ultimately decided to take the chance, figuring we could always just leave,” said Ms. Green, a nurse in her 40s. “I joked with my parents that if they didn’t hear from us, we probably got murdered by an ax murderer.”

By the end of the evening, however, they were playing board games and connecting with their new acquaintances on Facebook. They are returning this year.

But some hosts put themselves out there in vain.

Last Thanksgiving Jay Chen, 28, who is working on a master’s degree in social work at the University of Central Florida, cooked a feast with his roommates in their off-campus house.

They had extra seats, so he invited three strangers he met through the school’s version of Reddit. The table was set for them, but they never came. “I didn’t follow up,” he said. “I figured it might be a little creepy to say, ‘Where are you?’ or ‘Are you going to come?’”

Still, Mr. Chen is inviting strangers into his home again this year. “I am disappointed, but I am not deterred,” he said. “It will be cool if people come. It will be interesting to hear about their life and how things are going with them. And to give them a place to call home for a few hours.”

Or a way to get home. In what sounds like a 2019 update of “Planes, Trains and Automobiles,” some Thanksgiving travelers are offering strangers rides home for the holiday, on road trips that can extend considerable distance.

Leo Waklen, 62, a message therapist and Uber driver, is driving from his home in Stewart, Fla., to Chicago, where his relatives live. He plans to have a stranger sitting next to him.

“During the holidays there are tons of people who would love to go up north,” he said. “As long as it doesn’t cost anything, I am good with giving someone a ride. It gives me company, I may make a new friend.”

A few weeks ago he put an ad on Craigslist specifying what type of passenger he wanted. She must be female (“If a woman really wanted to do me harm and had a knife or gun, she could, so it’s probably a false safety, but I just feel better with a woman”); she must provide a photo of a government ID that he can send to his sons before the trip (“If I go missing, they will know who I am with.”); and she can’t be a smoker (“I don’t want smoke in the car, and when we stop to use the bathroom or get fuel, they can’t slow me down with a cigarette.”).

He already secured the ideal candidate and interviewed her over the phone. But they both decided to postpone their trip until Christmas.