They See You When You’re Shopping 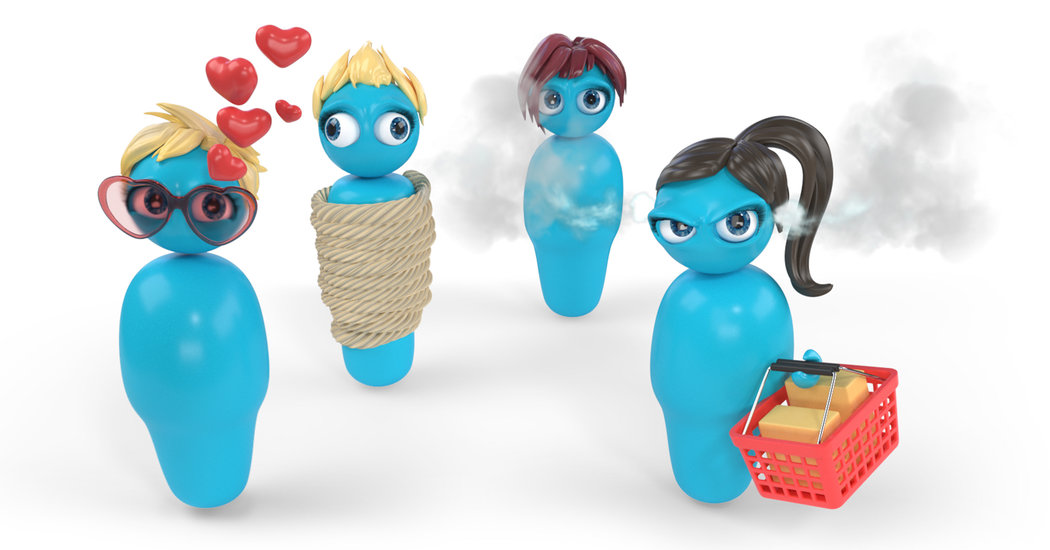 For months you’ve been casing a Gucci shoulder bag online, adding it to your virtual cart, only to close the tab before buying it. One weekend, lounging in your pajamas, you decide to go for it, and back you go to the Gucci website.

In an office building on the waterfront in Jersey City, N.J., a yellow cartoon figure roughly the shape of a bowling pin — that’s you! — appears on a customer service agent’s computer screen.

Your avatar joins a cluster of identically shaped avatars in this Gucci call center: green, blue, and yellow creatures, all with gleaming googly eyes and their country’s flag pinned on their torsos. Some, but not all, have hair.

The screen is displaying technology from Powerfront. Through its flagship product, Inside, businesses — most of them luxury brands — can see, chat with and track online shoppers. The program allows Powerfront’s clients to treat shoppers as if they were in a bricks-and-mortar store.

Powerfront said it processes the information of about 20 million unique customers from 400 clients every 24 hours.

Most people have become resigned to companies tracking them online, collecting their searches and analyzing their browsing. But Powerfront’s visualization, and its Pixar-like avatars, drive home the sheer amount of personal information available to brands every minute.

A customer-service agent may click on your colorful little avatar and see your IP address, location, sometimes your name, and any of your past purchases: the on-trend fur-lined velvet mules you bought in 2016, or the gold double-G belt you gave your sister for her birthday this year. A customer doesn’t need to be a registered user of the Gucci website for these details to be available.

If you’re chatting with the representative, they’ll also see the words you type before you press “send.”

All of this, Powerfront said, allows brands to provide the kind of service that luxury customers deserve, even if customers don’t fully realize that’s what’s happening.

“It is one thing to think, ‘O.K., somehow my clicks are being recorded somewhere,’” said Christine Bannan, a consumer protection lawyer at the Electronic Privacy Information Center. “But to think of an individual sales rep watching all of your clicks, I think it will resonate with people that this sort of tracking is so prevalent and what it really means. It makes it less abstract.”

Traditionally, when online customer-service representatives look at their computer screens, they see data, said Hadar Paz, the chief executive of Powerfront, in a phone interview. Charts. Graphs. The flood of information about their customers was often presented in aggregate or without context.

“They’re all sitting in the dark,” Mr. Paz said. “They don’t even see the customer.”

Powerfront, which was founded in 2001, used to be like that, too. Then, in 2015, it released the first version of Inside. Neiman Marcus started using the software in April, 2016; Sephora became a client about five months ago.

Gucci signed on in October 2017. One recent morning Mr. Paz remotely peered into the brand’s web store, where an agent was assisting a customer in Westwego, La., with questions about sizing. The yellow avatar had sleepy eyes and chopped auburn hair and was labeled “hesitant.”

Its shopping cart had been sitting idle for 23 minutes. In it was a pair of children’s black rubber slides, priced at $160. Also visible in the customer’s browsing history: a baby bomber jacket, $890, viewed in October.

“You’ve got to look out for these people,” Mr. Paz said, referring to another customer, this one at the Neiman Marcus site. According to that avatar’s profile, the customer had spent thousands of dollars in recent months on dresses from Alexander Wang and Dolce & Gabbana and Stella McCartney sneakers. “This is a whole different game than normal mainstream retail. You want to look out for her like she’s gold.”

That Neiman Marcus customer had chatted with agents 15 times this year. Each time, he or she saw only a small box offering the option to “chat with an expert” — not the bustling animated storefront displayed on the other end of the transaction.

These experts aren’t bots. Mr. Paz said he believes wealthy customers would find the notion of speaking to a bot “offensive.”

“You can’t have a bot selling a $3,500 bag,” he said. Customers “want a red carpet service, they want to be looked after. A luxury customer doesn’t like to be thrown to a bot.”

Purchasing is emotional, so Powerfront also measures how shoppers are feeling during their chats with customer-service agents. Through an analysis of their words, the movement of their cursors and other “personalized data,” the platform creates profiles of shoppers’ moods.

Powerfront call this “sentiment.” When shoppers-as-avatars become frustrated, their brows furrow and smoke pours from their ears.

Being watched and doted on by salespeople has long been part of the luxury shopping experience. Privacy experts acknowledge there is a value in adding a human touch to digital transactions.

Nonverbal communication — rolled eyes and harsh tones — get lost online. Powerfront tries to compensate for that.

“We’ve removed so many social cues from online conversation that I can actually see the benefit of trying to add that back in,” said Jennifer King, the director of consumer privacy at the Center for Internet and Society at Stanford Law School.

But Dr. King said things that would concern her include: storing emotional profiles of shoppers; selling insights reaped from customer data; or selling that data itself.

Powerfront does keep a record of customers’ past sentiments. And the company has access to an extraordinary amount of information. It not only knows when consumers are buying blouses, but also their favorite styles and fits.

It has a God’s eye view of how consumers interact with many luxury brands.

But for now, Mr. Paz said, Powerfront is not interested in operating a data farm.

“We know there is a lot of play, there is a big play with data,” he said. “We’re not blind to it.” For now, Mr. Paz said, the data would stay in the hands of only the brands using Inside, and not be used or sold by Powerfront.

“At the moment we are not using this,” he said.