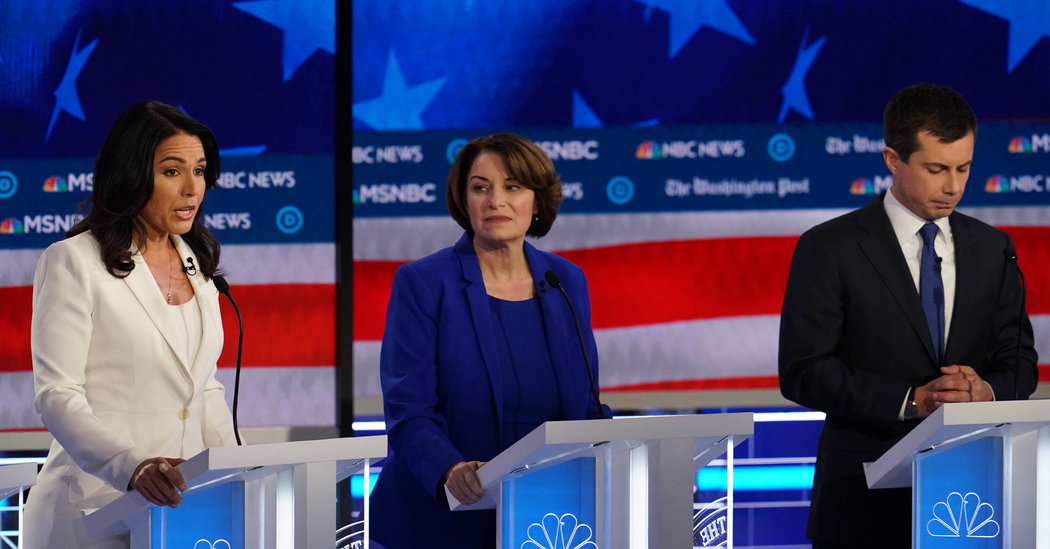 What has happened to the white pantsuit? Watching the Democratic debate held in Atlanta on Wednesday night, it was one of the questions that stuck with me. It’s not as important as Medicare for All, obviously, or economic disparity. But given the role white pantsuits have played in the national conversation for the last three years, it’s not immaterial. (No pun intended.)

It was only a mere presidential election cycle ago, after all, that the white suit was thrust into the limelight as a symbol of so much: women’s advancement and opportunity, and the possibility of change. That it became not an item of clothing but a placeholder in a continuum that began with the suffragists, continued through Geraldine Ferraro, and resonated today. That it sparked mountains of text and tweets and entire Facebook groups dedicated to celebrating its meaning and urging adoption — and then designating it the outfit of the opposition.

That Hillary Clinton made it a cause celebre, #WearWhiteToVote made it a hashtag, Melania Trump made it a pointed subject of speculation, and the women of the 116th Congress made it a gauntlet.

Now Representative Tulsi Gabbard of Hawaii, underdog presidential candidate, has, by all indications, made it her uniform. And yet no one really seems to care.

Wednesday evening marked the third time Ms. Gabbard appeared in a white pantsuit during a debate.

Though she wore a red jacket for her initial appearance, back in June, by late July she had changed to head-to-toe white (not ivory, not cream), a look she repeated in October — she didn’t make the September debate, to her very vocal chagrin — and again this week. She is also pictured in white, looking soulfully into the future, on the home page of her official campaign website. When she filed her official declaration of candidacy in New Hampshire, she was wearing a white jacket and shirt.

That kind of repetition, especially during events geared toward the public eye, does not happen by accident. There’s a reason she is opting for the imagery; a calculation behind the choice.

She should, by all counts, be seen as the standard-bearer of the tradition, so recently embraced by so many women. Yet reaction has been muted at best; more along the lines of “Hey, she looks really good in white,” than “our champion!”

Do we so quickly forget? Or is something else going on?

It’s not Ms. Gabbard’s relatively small slice of support in a large field; both Andrew Yang and Tom Steyer, with similar polling numbers, have managed to parlay visual symbols (math buttons and tartan ties, respectively) into an easy form of engagement and associative shorthand.

Part of the muted reaction probably has to do with the fact that Ms. Gabbard has engaged in a pretty public battle with Mrs. Clinton, calling her “queen of the warmongers” after Mrs. Clinton suggested Ms. Gabbard was the favorite Democratic candidate of the Russians.

It may also have to do with the fact that instead of a single female candidate on the stage, there are still four (plus Marianne Williamson), making the imagery of a woman standing in white less loaded with portent.

But it most probably also has to do with the fact that Ms. Gabbard herself doesn’t seem particularly interested in connecting with the suffragists, but rather is using her white suits to tap into another tradition, latent in the public memory: the mythical white knight, riding in to save us all from yet another “regime change war.”

Her white suits are not the white suits of Ms. Clinton, nor even the white of Ms. Williamson, whose early appearances in the shade often seemed tied to her wellness gospel and ideas of renewal and rebirth. Rather, they are the white of avenging angels and flaming swords, of somewhat combative righteousness (also cult leaders). And that kind of association, though it can be weirdly compelling, is also not really community building. It sets someone apart, rather than joining others together. It has connotations of the fringe, rather than the center.

And it is a reminder that clothes, especially when it comes to the optics of politics during an era of the ubiquitous screenshot, are only as meaningful as the content that fills them.