‘Voodoo Is Part of Us’ 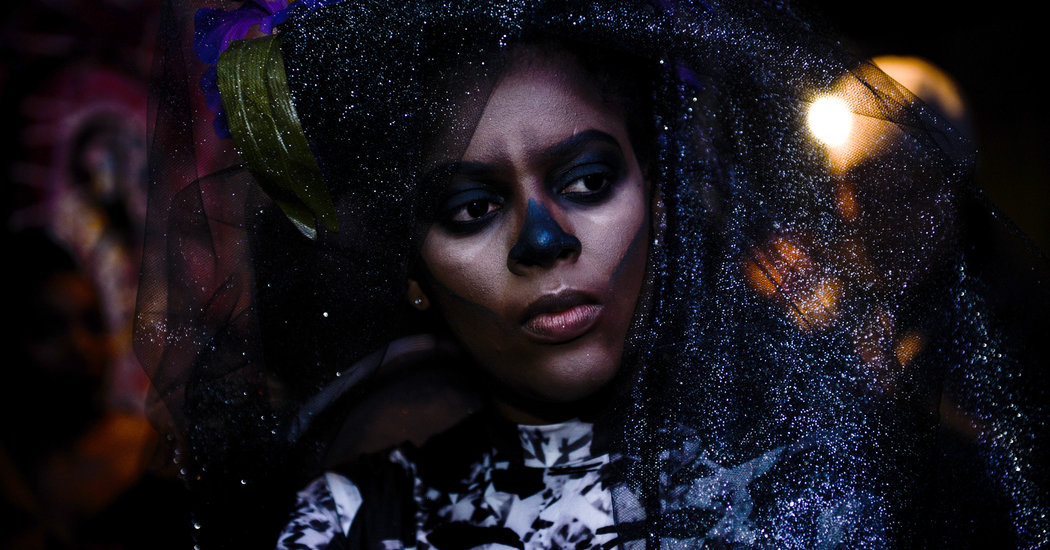 “You typically drink white liquor during Fet Gede, but if there is none you drink rum with no ice to feel the heat,” Ms. Nozy said. “Gede is a hot thing.”

Her face was painted to look hollow, like a skull, and she wore a dark skeleton bodysuit and a black veil. With her fingers wrapped around a smoking pipe and an austere look on her face, Ms. Nozy had become the embodiment of Maman Brigitte, a Haitian lwa (or goddess) of death.

Voodoo believers, Haitians and curious partygoers gathered last Saturday night to celebrate Fet Gede, or the Festival of the Dead.

Similar to Mexico’s Day of the Dead, Gede invites revelers to dress up, eat, drink and dance to honor the lwas and the ancestors who came before them. It is one of the most anticipated celebrations in the Haitian voodoo religious calendar.

Ms. Nozy, a 29-year-old Haitian immigrant who was born and raised in Port-au-Prince, moved to New York City just before she turned 17. As someone who believes in voodoo, she looks forward to the celebration each year, but acknowledges that many people, including Haitians, lack an understanding of what it is.

They believe that the religion “has something to do with black magic,” Ms. Nozy said. “Voodoo is part of us. It’s who we are. It’s the culture. Voodoo is the food that we eat. It’s the language that we speak.”

What voodoo is not, contrary to popular belief, is a dark spell-casting practice full of pin-dolls and demonic prayers, said the party’s organizers, Monvelyno Alexis, 43, and Riva Précil, 30, a husband and wife musical duo who have organized one of the city’s most popular Fet Gede events for the past seven years.

This means that the event of Fet Gede can be somewhat misunderstood, too.

“I know a lot of Haitians that dress up their kids for Halloween. But when it comes to Gede they say I am not interested in that thing,” Ms. Nozy said.

“Our generation is more open-minded when it comes to the voodoo religion,” said Ms. Nozy, who was part of a large crew at the party that night.

At the club, guests were dressed in the official Gede colors — black, purple, and white — and danced to rhythmic drumming. The room was thick with smoke from incense and cigars.

The night kicked off with a rum tasting at the altar, which helped guests get in the Gede mood. As Ms. Nozy and her crew danced, one man splattered Florida Water — a perfume used in voodoo for spiritual cleansing and protection — over their heads, leaving a sweet citrus and floral scent that covered the room. At times, Ms. Nozy and others would scream, throw their hands in the air or slam a wooden cane into the ground.

Fet Gede is observed typically in early November, although it can be celebrated all month.

Rituals include a special Gede dance, Banda, and making offerings to the spirits, the most famous of whom is Baron Samedi, known as the god of death (he is also the husband of Maman Brigitte, the goddess of death), Ms. Précil said. Together, both spirits — the Baron and Maman — revel in eroticisms, obscenities and drinking.

The ancestors, Ms. Précil said, like to party. “They don’t have the same restrictions or rules as we do here on earth,” she said. “They’re very fearless, so it’s a time where we sort of channel their ways and celebrate them by taking on their way of life.”

Haitian voodoo is a religion that emerged out of institutional slavery.

Starting in the mid-1600s, many Africans who had been brought against their will to the Island of Hispaniola (now Haiti and the Dominican Republic) arrived with their own spiritual traditions, eventually integrating them with those of the indigenous people of the island. As a result, voodoo, which means “spirit,” was born.

Voodoo, often spelled Vodou, is still regarded by many Haitians as the spiritual source of the country’s strength, healing and resilience.

Mr. Alexis said that voodoo isn’t something he practices or follows with a strict set of rules; it is more of a connection. He emphasized the importance of working to help Haitians reconnect with voodoo through events like this one.

“Whenever somebody asks us questions we always answer them,” he said. “We want to bring the Haitian way back to Haitians.”

Despite more than 80,000 Haitian immigrants in New York City, Gede celebrations aren’t that common, Ms. Précil said. If her ever-expanding parties are proof, however, she sees a growing interest in the event. The couple has been asked recently to bring their party to parts of Canada and even Haiti.

Music and dance are key for a successful Gede. Last weekend, Mr. Alexis and Ms. Précil each sang, accompanied by a live band, and Ms. Nozy performed a Haitian folklore dance, gyrating and chanting to the drummer’s beat. The energy of the crowd swelled as the room became more congested, everyone trying to inch closer to the show.

There was a tarot card reader and a face painter. At one point there was even a trivia contest, testing partygoers on their knowledge of Gede trivia and traditions.

“This is something that our ancestors left for us and we need to cherish it,” Ms. Nozy said. “Even though you’re not in Haiti, if you’re living in a foreign country, the culture is still alive. And it’s in you.”