He’s Never Going to Put Away That Shirt 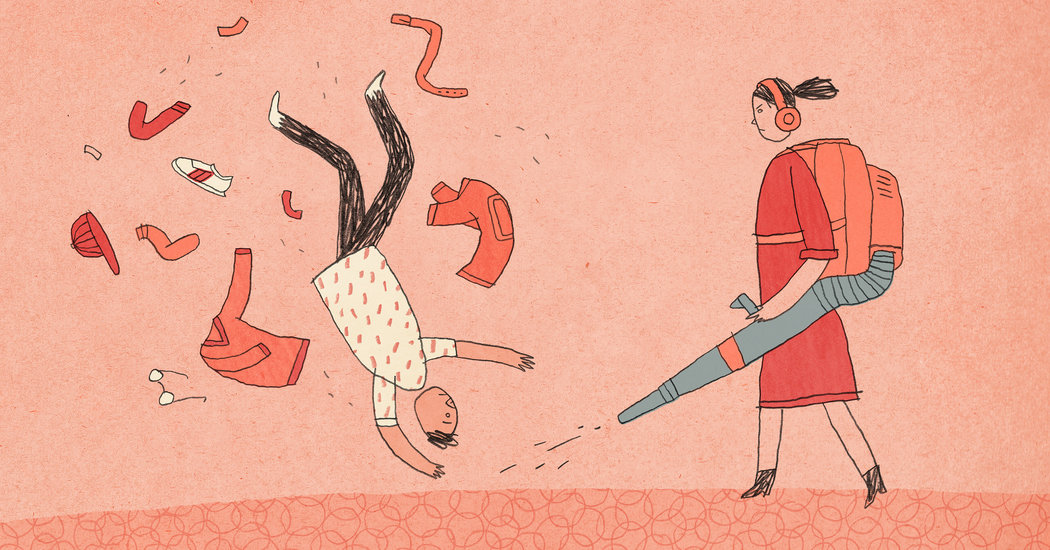 I would not let the shirt defeat me.

It had been sitting on top of a cabinet in our upstairs hallway, just outside of our bedroom, for days. There must have been a reason it landed there. Perhaps my husband, Doug, was about to wear it one day and changed his mind. Maybe he was rushing to work and didn’t have the time to put it away. We have two small children; mornings are hectic.

Why it ended up in the hallway, a mere seven steps from his actual closet in our bedroom, was a mystery. It’s not as if the hallway is his normal changing room.

After a week, I grabbed the shirt and brought it to his closet, but I was angry as I walked those seven steps, because by doing so I was essentially teaching him that if he left things out long enough, I’d take care of them. All day long I picked up after our sons, who were 9 and 7. Should I have to pick up after my husband as well?

[Sign up for Love Letter, our weekly email about Modern Love, weddings and relationships.]

The shirt in question was a white polo, seemingly innocuous. At first, I thought it was funny he’d left it there for so long. Was he unable to see it? Was my mind playing tricks on me? Did the shirt even exist?

I knew I shouldn’t turn a little thing like this into a big thing. That’s exactly the kind of nit-picking and score-keeping that can destroy a marriage. Still, it bothered me.

I told my mother.

“Your husband is a doctor,” she said. “He doesn’t have time to put away shirts. Just put it away for him.”

I told my therapist.

“You don’t have to nag,” she said. “Just mention it in passing. Reflect. Say: Oh, that shirt is still sitting there.”

I didn’t listen. Instead, I decided to conduct an experiment: I would not move the shirt. I would see how long it took for Doug to put it away. Every day that passed, I reminded myself I was taking a stand. There was no going back.

Every marriage has its own way of functioning. As a writer who works from home, I do most of the things a stay-at-home mom does: laundry, cooking, taking care of the children. (I do much more than that, but you get the gist.) Doug works full time as a doctor and is on call every third night and every third weekend.

When he’s home, he helps more than most husbands I know. He takes out the garbage, unloads the dishwasher, insists on putting the boys to bed on nights when he can. (He does much more than that, but you get the gist.) Like many husbands, he often details all of the things he does around the house, eager for his gold star.

Doug is a wonderful husband and father, but this wasn’t about the division of labor. This was about me cleaning up after him. And I didn’t want to do it. So the experiment continued. The shirt would stay on top of the cabinet as long as he let it. It was like playing a game of chicken, though without an opponent.

I would visit the shirt each morning, looking for clues. Was it an inch to the left? Had he picked it up, thinking he would return it to his closet, and then changed his mind? Sometimes I thought so, but upon closer inspection, no. The shirt had not moved. Not an inch.

Was the shirt lonely out there in the hallway? Did it miss its multicolored polo friends in the closet who were getting trotted out and shown off on weekends and casual Fridays? At times it seemed as if the shirt was actually speaking to me as I walked by, pleading with me. “It would be so easy for you,” the shirt said, “to pick me up and bring me home.”

“This is your home now,” I would think.

Weeks passed. Months. Some days I wouldn’t even notice the shirt. Other days, I would seethe.

I started telling friends about it. Their opinions about what I should do were like a Rorschach test, revealing the dynamic of each marriage as being either healthy and communicative (“Did you tell him you were upset?”) or servile and repressed (“Just put it away. It’s only a shirt.”).

Six months later, the shirt was still there, having joined the permanent exhibit of precious items displayed there — a photo of my mother with our boys, my grandmother’s candlesticks, and my husband’s white polo shirt (which had become meaningful for a vastly different reason).

Doug and I, in our 10 years of marriage, had been through a lot. When I was pregnant with our first son, my mother collapsed and needed emergency open-heart surgery. The night before her surgery, I was heaving with tears, unable to catch my breath, certain she would die, and Doug, rubbing my back, assured me that everything would be fine, and he was right.

Then, at 31 weeks of pregnancy, I went into preterm labor. The night I was admitted to the hospital, a resident told me a list of things that could go wrong with my pregnancy as he looked to Doug, an attending physician at the hospital, for approval. Doug told him he could leave, and as the door shut, he told me everything would be fine, and it was. I delivered a healthy boy at 34 weeks.

When our son was one month old, Doug’s father learned he had brain cancer. Doug didn’t tell me everything was going to be fine, and it wasn’t. His father died 15 months later, at which point I was pregnant again. The last conversation Doug had with his father was when he told him that I was pregnant, only five weeks along.

With my second child, at 28 weeks, I went into preterm labor again. I stayed in the hospital for three weeks on bed rest, away from my husband and almost-two-year-old son, fearing for the life inside of me. Blindness and deafness were possibilities for him, if he even survived. But at 31 weeks, I delivered another healthy baby boy, whom we named for my father-in-law.

We had survived scares and tragedies and our marriage was stronger for it.

I knew it was just a shirt. But the longer I left it there, the more it grew into a symbol of something bigger. After all, I was raising two sons, and they couldn’t grow up thinking a mother’s job was to pick up after everyone in the house. They needed to learn to pick up after themselves. They needed to learn how to deal with their own messes, big or small. I wouldn’t always be there to clean up, either literally or figuratively.

I started noticing the shirt again and imagining its movements. Was Doug picking it up and then putting it down again, refusing to put it away? That would be insane. I even picked it up once or twice, on days when my resolve was fading. But I was dug in. I could not let the shirt win.

And then one day the shirt was gone. I could barely believe my eyes.

“You put the shirt away,” I said to my husband that evening, incredulous.

“The one in the upstairs hallway.”

“Oh, yeah,” he said, as if it were no big deal. As if I hadn’t developed a relationship with that shirt. As if it didn’t mean something to me.

He detailed a list of other chores he’d completed, giving me a bright smile, waiting for his gold star.

“Oh, it was nothing. I also put away those socks of yours that were in the mudroom.”

The socks in question turned out to be my sweat socks for exercising. Or, more accurately, the socks for when I planned to exercise but didn’t. And instead of leaving them where they didn’t belong, my husband had kindly put them away for me, which made me feel even more silly for having made such a big deal out of his stupid shirt.

Here’s the thing about marriage. We commit to sticking together for richer or poorer, through sickness and health and during good times and bad, assuming that the tough times are the stress test. But what if it’s the opposite? What if the hard times bring out our best and make us focus on what’s important, while the danger zone is when we grow so complacent that we can afford to obsess over a neglected shirt for eight months?

Eight months! He really left it there for eight months. And so, it seems, had I.