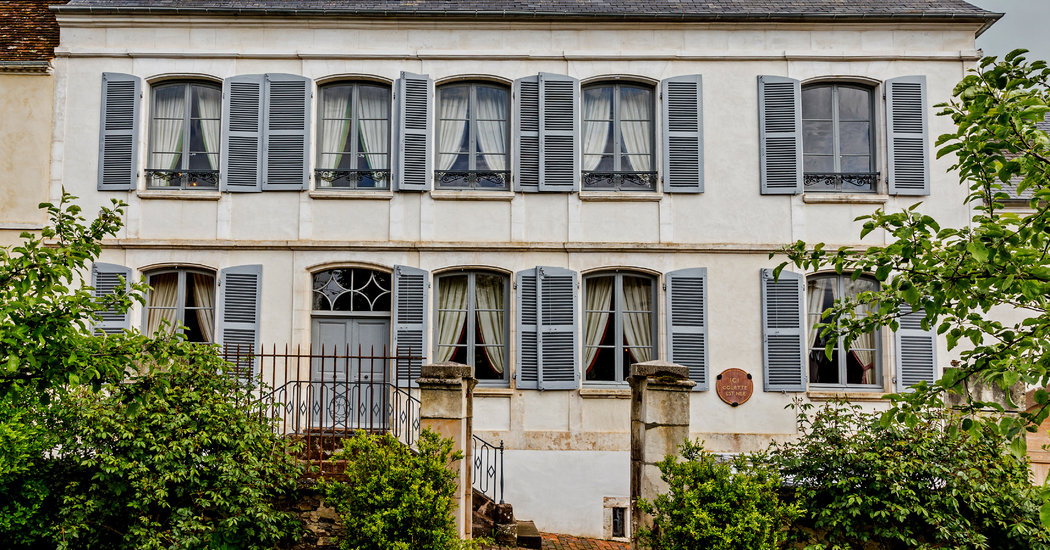 With her wry sense of humor honed by a coquettish but self-doubting vanity, the French novelist Colette would doubtless have been flattered to see the painstakingly authentic renovation of her childhood home by the Paris decorator Jacques Grange in Saint-Sauveur-en-Puisaye. Born Sidonie-Gabrielle Colette in 1873 in this Burgundian village 115 miles south of Paris, she went on to become a legend of French letters. Colette wrote more than 30 books and was made a member of the Belgian Royal Academy, the prestigious French Académie Goncourt and a grand officer of the French Legion of Honor, before becoming the first Frenchwoman ever accorded a state funeral in 1954 (she’s buried at Père Lachaise Cemetery in Paris).

As I knew from having read her most autobiographical works, Colette’s sensibility, by turns tender and sharp, sensual and austere, had been born and nurtured here, in this house and in this village. “My house remains for me what it always was, a relic, a burrow, a citadel, the museum of my youth. …,” Colette wrote in “Retreat from Love,” published in 1907. That house was opened to the public in 2016 after having been privately owned — and ever since, an exploration of Colette’s Burgundy has had a compelling centerpiece.

In September 2018, my spouse, Bruno, and I went on a group tour of the house, and when ushered into the first of these beautiful rooms, a hush fell over the crowd. This reverence made it easy to guess who might have already read “My Mother’s House” (1922) and “Sido” (1930), works in which Colette’s lush and lovingly detailed descriptions of these interiors also evoke the emotional and psychological climate of the life she and her family lived in these rooms. The house also has three walled gardens, where Sido, Colette’s mother, shared her delight in everything that “germinates, blossoms or flies,” as the writer put it, and by doing so, trained her youngest child’s acute powers of observation.

With its earnest staging of a cosmopolitan gentility mostly foreign to this small isolated farm town, the salon had a poignant elegance. A brass-and-bronze oil lamp with a green glass shade hung over a stone-topped Second Empire table with griffon’s feet and ivory dominoes scattered around three blue willowware teacups. There was an Aucher piano against one wall and a white marble pendulum clock on the mantle. If the salon was intended to display the Colette family’s refinement, the most eloquent of the six rooms we visited was La Chambre d’Enfant.

This is the little bedroom with a ceiling of heavy white-painted beams and a floor of tomettes, the terra-cotta tiles once common in Burgundy, where Colette slept in a chestnut sleigh bed for the first 11 years of her life. It is reached with a short flight of stairs from La Chambre de Sido, or Colette’s mother’s bedroom, which created a psychological promiscuity with her mother the writer experienced as intimacy while a girl, only to find it smothering when she became an adolescent.

Throughout her life, Colette’s allegiances would remain firmly on the side of the provincial. “I belong to a place I left behind,” she wrote of Saint-Sauveur-en-Puisaye, a runic phrase that weighs the freedom won by leaving the village with the wistfulness of her sense of permanent exile (she lived most of her life in Paris).

My favorite vignette of Colette’s proudly provincial identity is a passage from “My Mother’s House,’’ in which the adolescent writer pleads to be allowed to attend the wedding of their housemaid. “I grow red and fall silent for, instead of protesting, my mother envelopes me in a glance full of scorn and mockery.

‘I was thirteen-and-a-half once,’ she remarks. ‘You needn’t exhaust yourself any further. Why not say quite simply: ‘I adore servants’ weddings.’”

Dismissing her mother’s withering remark, Colette continues with a certain self-satisfied musing instead. “Where did I get my violent passion for rustic wedding breakfasts? What ancestor bequeathed to me, via my frugal parents, a positively religious fervor for rabbit stew, leg of mutton with garlic, soft-boiled eggs in red wine sauce?”

Aside from her voracious love of good food, what this flushed childhood memory reveals is how Colette was different from her mother. Sido was the daughter of a mulatto merchant from Martinique and a French woman from Versailles, and had grown up in a bourgeois but politically liberal milieu in Brussels. Even as a girl, Colette could see that her mother felt a deep nostalgia for the refined life she’d left behind. Unlike Sido, Colette didn’t see the villagers as “other,” because she was one of them and always would be.

So the exquisite renovation of Colette’s childhood home reveals a lot about the provenance of the most enduring prints on her still tender imagination. This is why a ramble around Saint-Sauveur-en-Puisaye and this departement of Burgundy, L’Yonne, will appeal as much to readers just discovering the novelist, as it will to those who’ve read her every word. For me, this wasn’t a homage to the writer, but rather a journey made to see the places that had formed and furnished her imagination.

Fog was beginning to shroud the village when we left the house on the rue Colette, so we decided to return the following day to use a pamphlet we’d bought at La Maison de Colette — “Sur les Pas de Colette,” (In the Footsteps of Colette), as a self-guided tour of the town. We would also visit the Le Chateau-Musée Colette.

“Colette’s house was so filled with emotions,” Bruno said as we drove out of the village. “Alec, when did you first read her?”

That happened that when I was working as a 16-year-old library page in the public library of Weston, Conn.

On sleepy summer Saturday afternoons, Mrs. Leahy, the glamorous librarian from Milwaukee who’d once been married to a rich Greek shipowner, would send me down to the cool mossy-smelling basement, supposedly to organize the periodicals. Occasionally there’d be a book on top of the magazines to be shelved, since she knew that once I’d gone subterranean, I’d sit on a folding chair for hours on end and read. That day, the slender volume was “The Ripening Seed,” a coming-of-age story set in Brittany.

“Alexander?! It’s time to go home, dear,” Mrs. Leahy called from the top of the stairs. I blushed when I ran into her in the office. “It’s wonderful, isn’t it?” she said, and I laughed out loud at the secret we now shared, our love of a vaguely prurient novel about how a middle-aged woman seduces her stepson and instructs him into the arts of love. I read almost nothing but Colette for the rest of the summer.

“Colette again?” asked my mother one night. I nodded. “Well, she was a reckless hedonist but then I think people often find her when they need her,” she said cryptically. I know I did, since her writing suggested a casual daily sensuality I hoped might be the antidote to the atonal dullness of the prim Connecticut suburb where I lived.

Then years went by without my giving Colette much thought, until I moved to France and was invited for the weekend to an old millhouse in L’Yonne by the Franco-American actress Leslie Caron, who was the friend of a friend. Madame Caron famously played “Gigi” in the 1958 film of Colette’s novel by the same name, and had also done many recorded readings of her work.

“Ici c’est le pays de Colette,” (This is the region Colette came from) Madame Caron told us when she picked me and other house guests up at the station in Villeneuve-sur-Yonne. She tutored us with long hot rides through rolling fields of sun-toasted wheat in search of the region’s best goat cheeses, visits to drowsy villages for a notable church, and best of all, long delicious dinners of what she called “good country food” in her garden under the stars. We never actually made it to Saint-Sauveur-en-Puisaye, because in those days there wasn’t much to see there, but Madame Caron became my Colette expert.

So before I left for Saint-Sauveur-en-Puisaye, I asked her how Burgundy had made Colette the woman she became. “There’s a blunt positivity in Burgundians and definitely in Colette’s writing, which is also recognizable in the architecture,” she replied. ‘The countryside of Burgundy is peppered with stocky, solid farms that each had round towers — to raise pigeons I think. Never refined or coy, the architecture of those rich farms didn’t go for ornaments of style, and neither does Colette’s writing.” Or as the biographer Judith Thurman, who wrote “Secrets of the Flesh: A Life of Colette” (1999), described her, “Colette was a pagan.”

The Musée Colette, which occupies an old chateau in the shadow of an 11th-century keep on a hill overlooking Saint-Sauveur-en-Puisaye, is as delightfully eccentric and bohemian as the woman who is its main subject. The museum, which opened in 1995, was founded by Colette de Jouvenel, Colette’s only child, and it presents a visual biography of the writer through a rich collection of photographs, posters, paintings, drawings and other memorabilia.

The most interesting gallery is the Biography Room, and specifically Wall A, which is covered with photographs of Colette and her family. Especially striking is a photograph of her father, Capitaine Jules Joseph Colette, a native of Toulon who was given a job as the tax collector in Saint-Sauveur-en-Puisaye by the Emperor Napoleon III after he’d lost a leg in the battle of Melegnano. Arriving in this Burgundian backwater, the one-legged Capitaine Colette promptly fell in love with Sido, whose gray eyes were, according to Colette, “the color of rain,” and the couple married in 1865 after Sido’s first husband drank himself to death.

The family’s idyllic life in Saint-Sauveur-en-Puisaye came to an abrupt and humiliating end in 1889 when a series of financial disasters, notably the obligation to provide a dowry for Colette’s half sister, required them to sell the contents of their beloved house and move to Châtillon-Coligny in the Loiret departement.

A love of water chestnuts

On an Indian summer day, it was pleasant to explore Saint-Sauveur-en-Puisaye on foot using the self-guided map of some 32 different places, including her childhood church and school, mentioned in her novels. Otherwise, the village has made refreshingly little use of its most famous daughter to promote itself as a tourist destination.

The most interesting stop was La Poterie de la Batisse. Intrigued by the primal sensuality of conjuring objects from wet clay, Colette loved this pottery works, which was founded during the 13th century and still produces hand-turned kiln-fired jugs, jars and dishes from locally dug clay.

We’d had a good lunch of boeuf bourguignon at Les Passantes, a newly opened restaurant in Saint Sauveur, the day before, but I wanted to try Colette’s favorite tables still in business today. So we headed east to Saulieu and the Relais Bernard Loiseau, which Colette knew as L’Hostellerie de la Côte d’Or under the celebrated chef Alexandre Dumaine.

Cornuelles, a variety of water chestnut that grow wild on the ponds in the Puisaye, were what Colette yearned to eat when she returned to Burgundy, but since this lowly food wasn’t on the menu at L’Hostellerie, the chef Raymond Olivier of Le Grand Vefour in Paris intervened on Colette’s behalf to ask Dumaine to prepare them for her. The archives of the restaurant still contain the thank you note she sent to the chef.

There were no cornuelles at Le Relais Bernard Loiseau that night. So we chose the most Burgundian dishes on the menu, including tiny piping hot frog’s legs with garlic puree and parsley jus, and pike perch a la facon d’une Pochouse (a traditional Burgundian fish stew), Epoisses cheese and a quivering sugar-dusted bonnet of a soufflé flavored with Burgundian hazelnut liqueur.

Heady from the unexpected intimacy with Colette we’d found during a weekend in Burgundy, this meal was the perfect way to fete this fascinating grande dame of French letters.