14 Hours Inside the Church of BravoCon 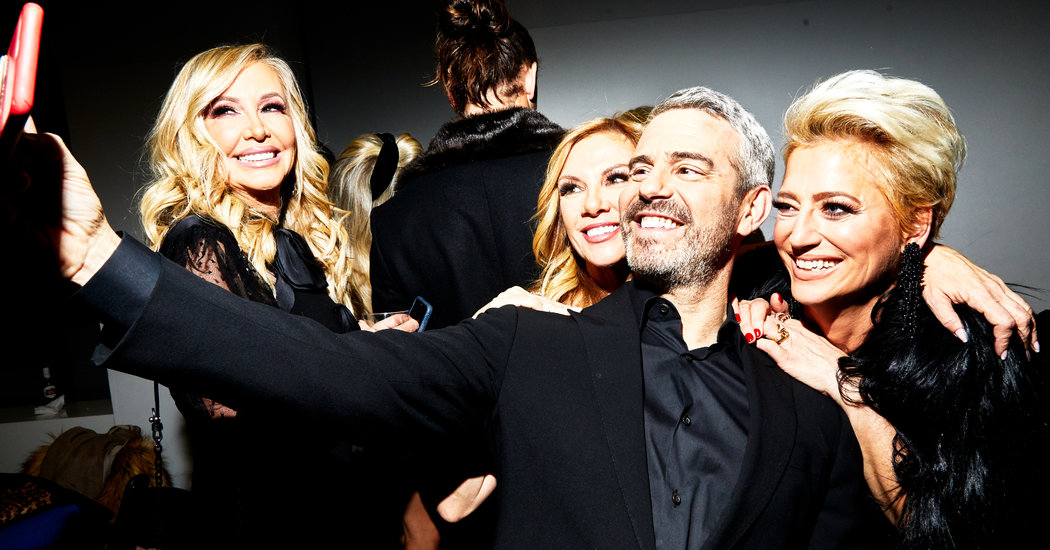 First, I needed coffee. After I found a seat in the packed ballroom before the first panel on the first day of the first BravoCon this past Friday, I headed to the concession stand in search of caffeine. It was a little before 10 a.m.

“Sorry, we aren’t open yet,” the woman behind the counter said. I stood there for a moment, absorbing the bad news, when another woman walked up and asked: “When will you have alcohol?”

There would be plenty of options soon. You could visit the “Southern Charm” bar or the Mazel bars, pick up a can of Loverboy (a sparkling hard tea from members of the “Summer House” cast) or learn to make cocktails with Tom Sandoval and Tom Schwartz of “Vanderpump Rules.” (The coffee soon came, too.)

For now, we both slunk back to our seats empty-handed. But we wouldn’t be sitting for long. There would be a lot of standing at BravoCon, a three-day conference for superfans of the cable network, because these people were, well, pumped.

As soon as Andy Cohen, an executive producer of the “Real Housewives” franchise and the host and executive producer of “Watch What Happens Live,” hit the stage at the Manhattan Center in New York City, the crowd was on their feet, screaming and cheering. We stood again as each panelist, all former “Housewives,” came out. (The panel was called Bravo All-Stars: OG Housewives Edition.)

Later in the evening, at a taping of “Watch What Happens Live,” we rose again and again with religious fervor as more than 75 “Bravolebrities” (what the network calls its shows’ stars) were paraded out over the course of two hours.

There would be lots of standing throughout the day — in line to take photos with the likes of Tinsley Mortimer of “The Real Housewives of New York City” and Jeana Keough, formerly of “The Real Housewives of Orange County”; at the back of a room for a panel called Empire State of Wives because all the seats were taken; while walking from site to site for panels, brunches, shopping and dinners.

Everyone seemed happy to do it, and just really (really) happy to be there. When three-day passes for BravoCon went on sale in August, they were gone in less than a minute. A weekend of live events in New York City and the chance to get up close to the faces normally seen only on TV and on social media? Sold — for $299.50 to $1,499.50 to attend all three days, depending on how much access you wanted.

The Bravo stars seemed pretty happy to be there, too. They mingled and took selfies with fans as they sold their wares (books, clothes, wine) at the Bravo Bazaar. Backstage before “Watch What Happens Live,” they mingled with each other and posed for more selfies with cast members from other shows.

“Whenever something’s the first, you’re like, ‘Oh, is this going to be like Fyre Fest?’ You never know,” Mr. Sandoval said backstage. “But it’s already been a huge success.”

Mr. Cohen said that the idea for a conference had been floated around Bravo for years. “It’s obvious the time has more than come,” he said. “I can’t think of another network that has this much brand loyalty, and that means so much to people.”

Some of the fans in attendance wore D.I.Y. T-shirts with quotes from the shows. LED signs on the walls with phases like “whoop it up” and “turtle time” needed no explanation. (But just in case you do: Both are rallying cries to party coined by Housewives.)

Inside the Real Housewives Museum were artifacts that would make sense only to the faithful: breast implants that once belonged to Tamra Judge (Orange County, 2007 to present); jelly beans, referring to Kelly Bensimon (New York, 2009 to 2015) and the e-cigarette that Allison DuBois (Beverly Hills, 2010) puffed on during the epic “Dinner Party From Hell” episode.

Many fans traveled from out of state and abroad, bringing to life their group chats, Instagram fan accounts and dedicated Facebook groups. A whole cottage industry has sprung up around the network’s shows: Bravo-adjacent podcasts, products and personal appearances. (The New York Times has an employee-created Slack channel dedicated to Bravo news and analysis.)

Brandon Graeter, 36, who hosts a Real Housewives party every other month with the Moxy Hotels, said the Housewives have affected how we communicate online.

“Shows like ‘Atlanta’ completely changed the landscape for GIFs culture and making meme-able moments out of sound bites,” Mr. Graeter said. “I see a lot of people using Housewives GIFs now and memes that don’t even watch the Housewives, but they’re so familiar now with these people.”

Micara Ludens, 32, and two friends flew from Chicago to attend the conference. She has watched the network for years and has multiple group chats with friends from college and former co-workers who have “bonded over the chaos, the mess and the love that is Bravo,” she said.

“I equate this to how groups of guys talk about sports and fantasy football,” Ms. Ludens said. “So in the same way that people will compete about sports teams, you have your Packers versus Bears fans, I’m Team Bethenny and everyone else is Team Ramona.”

Mr. Schwartz, of “Vanderpump Rules,” said over a shot of tequila and a beer: “People roast us and they make fun of us, but I think on some level they appreciate how much we give ourselves over to the show. It’s almost cultish with Bravo fans. They’re very passionate.”

Bravo has worked hard to build that cult, partly by seeming to laugh with the audience.

“We’ve had a thing with editing that we’ve called the ‘Bravo wink,’ where sometimes we’re winking at the audience,” Mr. Cohen said. “Because someone is saying one thing and they’re doing a completely opposite thing. Are people in on the joke that are on the channel? There is no joke, that is their lives. And they’re very proudly living them.”

On “Watch What Happens Live,” questions from callers are peppered alongside Mr. Cohen’s, and live polls let viewers weigh in on the discussion.

“The content really is mainly driven by what we think the fans want and what the fans tell us they want,” Mr. Cohen said.

That passion was palpable at the “Watch What Happens Live” taping at Hammerstein Ballroom on Friday night in front of nearly 2,000 attendees. Grown women and men rushed the stage during commercial breaks for the chance to take a selfie or touch the hands of the stars. They danced as Kim Zolciak and Mr. Cohen performed “Tardy for the Party.”

And they caught Ms. Judge at the end of the night when she stage dived into their arms.