Tech We’re Using: The Most Important Kitchen Tools This Holiday (or Any Season, Really) 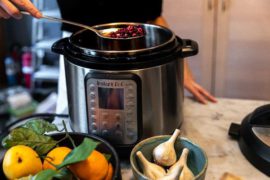 How do New York Times journalists use technology in their jobs and in their personal lives? Melissa Clark, a food writer for The Times, discussed the tech she’s using.

This time of year, you test and write lots of recipes. What are your most important kitchen tools and tech products for doing your work?

The most important kitchen tool that I use for developing recipes is my trusty Polder digital scale. No matter the recipe, I measure the volume and weigh every ingredient, from the large onions (7 ounces each) I sauté for my Spaghetti With Caramelized Onions, to a cup of flour (125 grams) for my Olive Oil Sea Salt Brownies.

At the Food section, we are urging people to move from volume measurements to using weights, which is much more precise. While this isn’t a big deal for roast chickens and lentil soups, it can make a tremendous difference in baking. For example, that cup of flour might weigh anywhere from 120 grams to 150 grams depending on how you packed it, which can mean the rise or fall of your no-knead bread. Weighing gives the baker a much more consistent result.

I’m also dependent on my fancy Thermapen instant read digital thermometer, which can tell me if my turkey thighs have reached the required 165 degrees or whether my homemade yogurt is fermenting at the necessary 110 degrees. You don’t strictly need a digital thermometer for this, but I like its speed and accuracy. The large readout doesn’t hurt when I’m bending over the turkey pan in the oven, either.

Of course, no matter how turkey-splattered or floury my hands get, my iPhone 8 is always within reach. I use the flashlight to see in the depths of the oven, the timer function to remind me to check the beans, and the camera to take pictures of the finished dishes so I can post them on Instagram, which is my social media addiction of choice (I’m @clarkbar).

But my favorite kitchen tech is an old darkroom timer. It’s easy to use with messy hands, and the buzzer makes an unholy racket that keeps me from burning things in the oven while I’m multitasking on the iPhone.

Is there a new or innovative kitchen tool you’ve recently adopted? 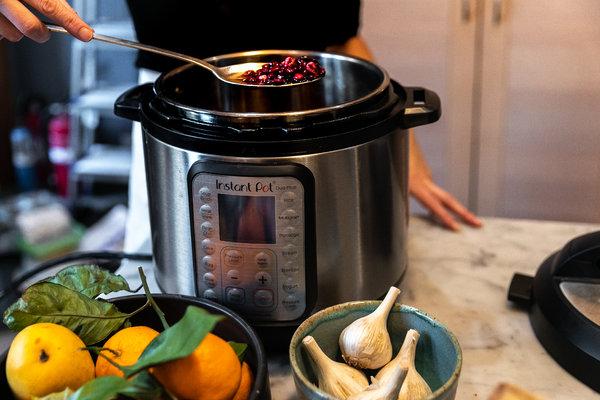 Since acquiring the Instant Pot, Ms. Clark has given up her crockpot and rice cooker.CreditJeenah Moon for The New York Times

I love my Instant Pot for two reasons: convenience and speed. I can load it up with all the ingredients, plug it in, and go for a run (or to the office). Then when I come back, I’m starving and dinner is ready. It’s a lot like a slow cooker in terms of its convenience, but cooks things in minutes instead of hours. It can cook dried chickpeas or beans from scratch, without soaking first, in under an hour. And it produces the most incredible ribs, stews, and braised pork, which is exactly what you want this time of year.

Since I got one I’ve given up my crockpot and formerly beloved rice cooker, which are no longer needed in my kitchen.

Plenty of our readers are just learning how to cook, a process that can be intimidating. What basic tools should they buy to get started?

I truly believe the best tech you can get for a new cook is a subscription to NYT Cooking. It’s a vast and deep world of over 19,000 recipes, guides and videos that can teach novices and delight and enthrall more experienced cooks. You can even use it to curate your very own cookbook on demand, which is a very cool holiday gift.

There’s always music playing, often via Roon, at her home in Brooklyn.CreditJeenah Moon for The New York Times

Also, I think the digital scale I mention above should be standard-issue equipment in everyone’s kitchen. It’s one thing — like a good knife and a sturdy skillet — that will really make a positive difference in cooking, especially if you’re learning. Once you start weighing ingredients for your Sunday morning pancake batter, you’ll never go back to cups and spoons. A scale is cheap and compact, and now you don’t have to wash measuring cups.

Beyond your job, what tech product do you and your family love and why?

People often ask me how I stay fit as a food writer who constantly taste-tests brownies and cheese fondues and the like, and the answer is that I’ve been a runner since I was 17. My Garmin GPS watch spurs me on to run faster, and I link it to the Strava running app on my phone, which keeps track of my mileage so I can set goals — and sometimes even reach them.

My Breville electric kettle has five temperature settings, which I actually use depending on what I’m making.

I start out with boiling water for my morning cup of strong Assam with milk, then go progressively lower from there, 205 degrees for lemon verbena, 195 degrees for the hot ginger lemon water I drink all winter long, 175 degrees for my afternoon green tea before ending up back at 212 degrees for my nighttime toddy just before bed. Our Brooklyn townhouse is drafty this time of year, so sipping hot beverages all day long helps.

There’s always music playing in our house, a mix ranging from the “Mamma Mia” soundtrack to Debussy and U.S. Girls. My husband and I ripped two lifetimes’ worth of CDs into a digital blob, which we listen to all over the house using Roon, which is a music player like iTunes but with a much cleaner interface and it’s easier to control, plus Tidal for streaming, because it has better sound than Spotify. We stream WFMU and BBC Radio 3 through Roon, and my husband buys a lot of our music on Bandcamp, a site where artists and labels sell their music directly, as files, CDs or vinyl.

Cookbooks or touch-screen tablets — what medium is better for looking at recipes?

It’s not about either-or, it’s about both. The question is, where and when.

On the couch or in bed, nothing beats the feel and heft of a cookbook in your hands. But touch-screen tablets, and phones for that matter, make searching for recipes and how-to cooking videos on the fly easy and faster. I think people gain inspiration from cookbooks, which is important when you’re dreaming about cooking. But for actual day-to-day getting dinner on the table, these days a tablet or phone is indispensable.

FacebookshareGoogle+sharePinterestpin it
Missed periods and ovarian cancerCritic’s Notebook: Rib-Eye Steak With a Side of Shakespeare
Latest