She Said Yes, but What About Her Sno-Ball? 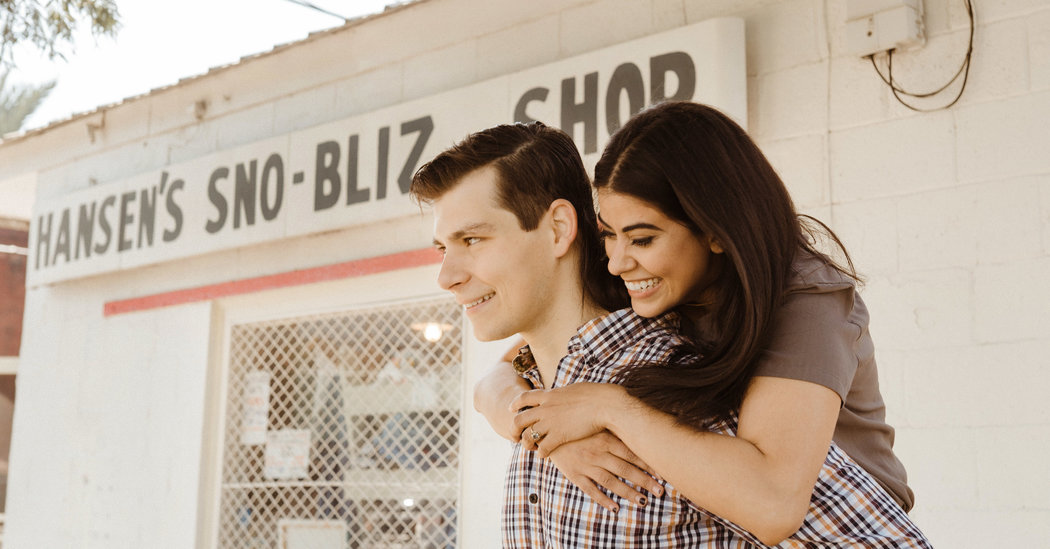 Dr. Seema Banno Qayum and Dr. Sanjin Tunovic were married Nov. 9 at the Civic Theater in New Orleans. Dr. Jonathan Orner, a friend of the couple who became a Universal Life minister for the occasion, officiated.

Dr. Qayum, 31, is a second-year fellow in pulmonary critical care medicine at Columbia University Irving Medical Center in New York. She is a daughter of Dr. Naheed Z. Qayum and Shahid Qayum of New Orleans.

Dr. Tunovic, 32, is a chief resident in internal medicine at Tulane University Medical Center. He graduated from Harvard. He is the son of Zdravka Tunovic and Ibrahim Tunovic.

Dr. Qayum was a third-year medical student and Dr. Tunovic was in his first year at Tulane when a mutual friend introduced them in November 2012 over dinner, and he teased her about how easy she had it as a third-year student.

“I thought she was very beautiful, and took it as an opportunity to joke,” he said. “I was 100 percent sure she was impressed by it.”

Dr. Qayum did not find him funny at all, and wanted nothing to do with him.

But after a friend explained to her that Dr. Tunovic had immigrated as a child to the United States with his parents from war-torn Bosnia, she began seeing him differently.

“He was a much more complex gentleman,’’ she said. “He had gone through a lot of life stresses.”

By early 2013, Dr. Qayum was glad to run into him at MedProm, a formal dance for medical students. The two chatted and danced, and then they went to an after party, where he asked her out.

“He was incredibly charming and kind,” she said.

Their first date a couple of weeks later was at a library on campus where they studied for exams, and then later picked up something to eat.

“We sat in one of the quads and talked, and it was nice,” Dr. Qayum said, and learned they had similar tastes in music, and he was outdoorsy and disciplined. They began studying together, and by February were officially seeing each other. Every couple of weeks they took a breather from studying to listen and dance to live music — zydeco, reggae, jazz and brass band music — at clubs along Frenchman Street, mostly at the Maison.

“Before her, I really didn’t go out that much,’’ Dr. Tunovic said. “I ate at the same restaurant and did takeout. She opened up the food and music scene to me. She was my gateway.”

She also introduced him to one of her favorite places, Hansen’s Sno-Bliz, where people line up down the block for sno-balls, shaved ice drenched in handcrafted syrups.

“It melts and become slush,” she said, and early on she told him her dream was that someone would propose to her there one day.

In March 2018, four months after they learned she would be moving to New York in July for a pulmonary fellowship at Columbia, Dr. Tunovic got down on one knee in front of Hansen’s after hours.

“It was wonderful,” she said. “I felt ready to tackle this long distance. I felt more secure.”

But, one question remained.

“Where’s my sno-ball?’’ she asked with a laugh, and the next day they returned to Hansen’s, where she ordered her favorite: a satsuma orange sno-ball, lasagna-style with condensed milk in the middle and on top.

After tackling the long-distance relationship, Dr. Tunovic, now completing a chief residency year in New Orleans, in December is to be matched as a cardiology fellow to begin next year at one of the hospitals he applied to, all within an hour of New York.

“It’ll be nice to be in the same city with her,’’ he said, and closer to his parents in Endicott, N.Y. “If I had any more fingers I’d cross them.”

FacebookshareGoogle+sharePinterestpin it
Running a Marathon With My MomThe City That Cycles With the Young, the Old, the Busy and the Dead
Latest