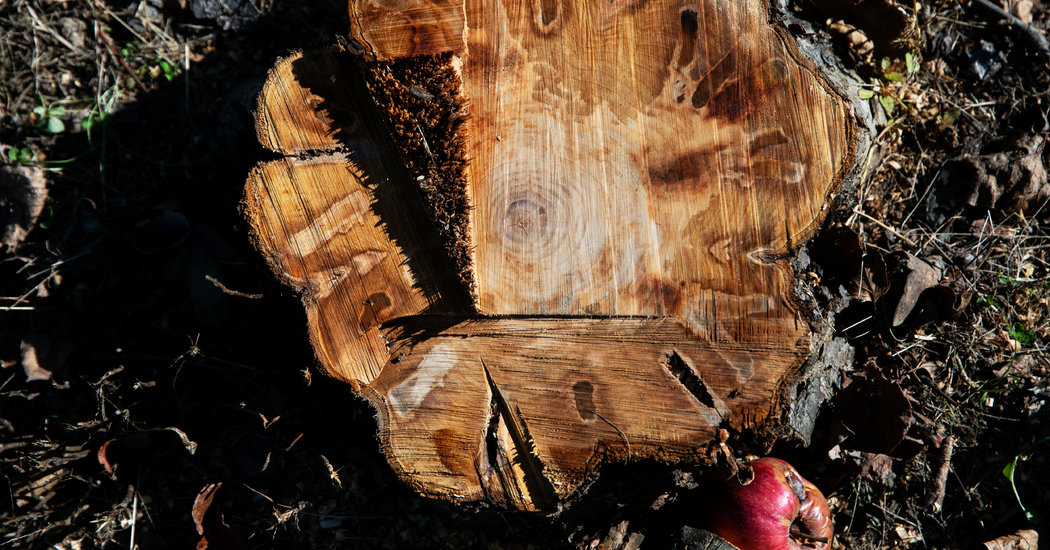 GENEVA, N.Y. — Across the country, hundreds of kinds of apples were meticulously developed by orchardists over the last couple of centuries and then, as farms and groves were abandoned and commercial production greatly narrowed the number of varieties for sale, many were forgotten.

Some of this horticultural biodiversity, though, has been nurtured by dedicated growers who want to preserve the forgotten flavors and other traits of apples from the past. For example, some of the best apples ever developed for baking pies are no longer grown commercially, experts say, but are still thriving in heirloom orchards.

“They are a piece of our history as a variety and part of our cultural identity,” said Mark Richardson, director of horticulture at the Tower Hill Botanic Garden in Boylston, Mass. “But also some of these varieties may be important for breeding the next generation. They are an insurance policy against a catastrophe.”

A burgeoning threat is coming for apples, though, both of the historical varieties and the popular ones grown in the orchards today. A disease called fire blight, easily managed for a long time in apple and pear orchards, is becoming more virulent as the climate changes and as growers alter the way the trees are configured to produce higher yields. Some researchers say newer varieties may be more vulnerable, too.

It is another example of threats to the nation’s fruit crops, as citrus greening has hammered Florida’s orange groves and a fungus called Tropical Race 4 has devastated the world’s banana plantations.

“Commercial apples are getting hit fairly hard by fire blight,” said Kerik D. Cox, a plant pathologist who has studied the disease for a decade at Cornell College of Agriculture and Life Sciences here. “And the intensity of it appears to be new.”

As they walk down a row of small and thin apple trees, with large dark red apples hanging on them like Christmas bulbs, Dr. Cox and a graduate student, Anna Wallis, point out a shriveled, dark brown branch on one of them.

The blight — caused by the bacterium erwinia amylovora — is native to the United States and predates the introduction of apple trees to North America. Apple and pear growers have long managed the disease, by trimming dead branches and in recent decades, spraying antibiotics like Streptomycin. But the blight is becoming resistant to the antibiotics, some say, and has become more aggressive, wiping out hundreds or even thousands of trees in some places.

The blight is spreading to places where it had not been seen before, into New York’s Champlain Valley and parts of Maine for example.

Tower Hill Botanic Garden was forced in November to raze its orchard of 238 heirloom trees — two each of 119 antique varieties. The orchard is dedicated to apples developed in this country, Europe and elsewhere long ago.

One of the varieties, the Roxbury Russet, dates back to the mid-17th century, and is believed to be the oldest apple variety cultivated in the United States.

In an effort to keep the ancient lineage of the orchard from disappearing, the scionwood — cuttings from recent aboveground growth — was grafted onto new blight-resistant root stock. The new tree grafts will grow for a year at an orchard in Maine, and then will be returned for planting in 2021.

Orchards like the one at Tower Hill — there are fewer than a dozen in the country, experts say — have been likened to the Svarlbard Global Seed Vault, a concrete facility storing nearly one million seed species on the side of a mountain on a Norwegian island.

The genetics of these trees may exist nowhere else and could someday be used to create new commercial varieties because of their flavor or resistance to disease and pests. Keeping the actual trees alive by growing successive generations through cloning and grafting is the only way to assure their lineage. That is because a seed from a particular tree may not contain all of the traits of the variety because one of the parents is unknown.

Tower Hill had never seen fire blight during the bloom season, which provides a potent pathway for infection, until 2011. “We get a combination of weird and tragic weather, these days, variable and unpredictable,” Dr. Cox said.

Unusual spikes in temperature and more wet weather form ideal conditions for the bacterium. While May temperatures in this part of the Northeast used to rise more gradually and more uniformly, that dynamic started changing about 20 years ago and now some days in that month can spike into the 70s, Dr. Cox said. In May 2010, temperatures soared into the 80s.

“Fire blight enters the tree through the flower and if it lands on a flower in bloom with temps in the 60s, it can’t enter,” Mr. Richardson of Tower Hill said. “But if it’s over 75, the conditions are right for the spore to enter the flower and get into the vascular system and it moves through the orchard faster.”

Honeybees and other insects then spread the disease as they pollinate apple blossoms. At warmer temperatures, fire blight is much more virulent. “It has the ability to kill a tree in a single season,” Mr. Richardson said.

“We have a lot of trees that have been mutilated,” he added. “And they are succumbing to old age because of the presence of fire blight, which weakens them.” At optimum temperatures, the bacteria double in volume every 20 minutes, Dr. Cox said.

“I never thought about fire blight, it was an issue for the South,” said John P. Bunker, a long time apple grower farther north in Palermo, Maine, who identifies and preserves forgotten heirloom varieties across the country. “But 10 years ago, there was a big fire blight outbreak and suddenly it was here. I have preservation orchards all over my property, hundreds of trees and I had never, ever seen it and all of a sudden I was seeing it.”

What makes the ecology of the disease even more challenging to solve and address is that while a warmer world is a big part of the emerging problem, there are other factors that may be contributing to ideal conditions for an outbreak.

Apple orchards these days are a very different creature than they used to be. “People climbing apple trees and harvesting fruit with ladders, that’s gone,” Dr. Cox said. “It’s now about making an apple like a grape, where you can walk by and pick the fruit right off the tree.”

Many modern commercial apple trees are planted in what’s called a high density trellis system. They top out at about six to eight feet and are narrow, like a sapling. Yet, fertilizers can push this waifish modern tree to grow about 50 full-size apples, compared to as many as 300 or so on the old-style trees. But instead of some 300 trees to an acre spaced about 10 feet apart, trees are planted 18 to 24 inches apart and there are 1,500 or so trees to an acre.

The trellis-style orchard increases product and profit. A few decades ago, apple growers harvested 200 to 300 bushels of apples to the acre. The goal now is 2,000 bushels an acre, Dr. Cox said.

The trellis configuration makes it difficult to manage fire blight. “The old-style trees that we used to grow were big and had tons of branches and the bacteria couldn’t move through the tree very well,” said George Sundin, a plant pathologist at Michigan State University, where fire blight is also a growing problem. In these new trees, “the branches are smaller and it’s a short distance from the branch to the tree and down to the roots.”

Managed by cutting out infection, fire blight rarely killed trees in the old days, but now can wipe out hundreds or thousands in a month or two. It can spread from orchard to orchard through the wind or by insects carrying the disease.

Another contributing factor may be that the new apple trees are not as resistant to disease. “They are the equivalent of a caged chicken, planting them in crowded conditions and pushing them with nutrients to grow 50 or more apples to a tree,” Dr. Cox said.

And because many more trees are being planted, tree growers are rushing to fill orders. “Nurseries can’t grow trees fast enough and quality is compromised,” Dr. Cox said.

Moreover, modern varieties may also play a role. “So is it primarily climate change, or is it that they are packed together?” Dr. Cox asked. “Or is it the new varieties — such as Evercrisp and Gala — which may be more susceptible? That’s what we are trying to find out.”

One answer may be growing in the National Apple Collection, not far from Dr. Cox’s research grove. Managed by the Department of Agriculture, it is the largest collection of apple genetics on the planet. There are some 6,000 trees, wild and domestic, with 55 species and hybrids from around the world, including Central Asia where the apple originated.

These genes are so critical to the future of apples that cuttings from the trees are shipped to the National Laboratory for Genetic Resources Preservation in Fort Collins, Colo., where they are preserved in liquid nitrogen and stored in a vault.

One of the ways these trees may earn their keep is by helping out in the battle against fire blight.

“We are looking at genes from wild species for fire blight resistance,” said Awais Khan, a plant pathologist at Cornell who is doing this work. It might take 25 years of breeding to create fire blight resistant apple trees, he said, “but there are ways we can speed up the process, so maybe 10 or 15 years.”