A Newcomer to Christmas Creates a Very Old Eggnog 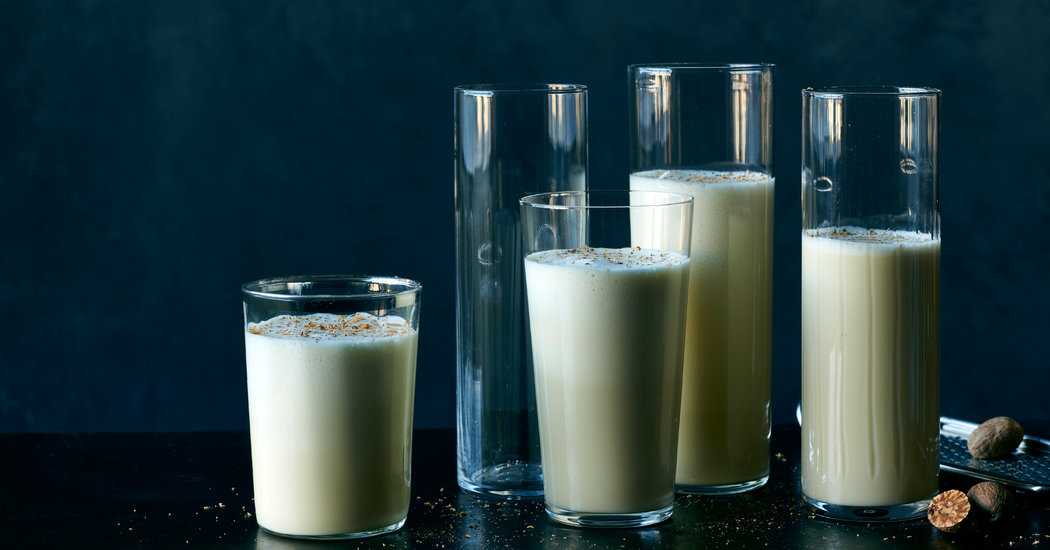 Growing up Jewish in Oklahoma City, Aaron Goldfarb encountered few opportunities to drink eggnog during the holiday season. But romance can change a person’s circumstances.

“I married a woman who loves the holidays,” said Mr. Goldfarb, who writes about beer, whiskey and cocktails for publications like Esquire and Punch. His book “Gather Around Cocktails” (Dovetail, $20), a compendium of holiday-related drinks, was published this fall.

“She’s actually half-Jewish,” he said of his wife, “but 100 percent celebrates the holidays.”

When the couple moved into a new apartment in Park Slope, Brooklyn, in 2014, up went the Christmas tree in December. Mr. Goldfarb loved it. “Then we started doing a Christmas party,” he recalled. “And I like to make things, like every cocktail guy likes to make things. I thought, I’ll make my own eggnog.”

So began a journey deep into the punch bowl. Mr. Goldfarb’s book includes recipes for eggnogs flavored with gingerbread, peppermint, pistachio and toffee syrups. For the vegan crowd, there’s the Eggless Avocado Nog and Spiced Mexican Chocolate Nog. He said he has experimented with batches using “every spirit you can imagine, except gin.”

And for the truly adventurous, there’s his aged eggnog. His batch for their first party was pretty straightforward, an amalgam of the TV host Alton Brown’s formula — one of the first things that pop up when you Google “eggnog” — and other recipes. (Like most eggnogs, it was a combination of milk, cream, eggs, sugar, spices and, in alcoholic versions, either rum or brandy or whiskey or a combination thereof.)

When the party was over, though, Mr. Goldfarb had some left over. “I put it in a growler and threw it in the back of the fridge,” he said. “I thought, well, let’s see what happens.”

Sure enough, when he checked on it in a year, it was still good, if a bit thick and chalky.

Dave Arnold, an owner of the Manhattan bar Existing Conditions, who has spent his career studying food and drink science, said the alcohol in eggnog kills any potentially harmful bacteria. “Counterintuitively,” he added, “the longer it’s aged, the safer it is to drink.”

These days, Mr. Goldfarb ages a batch of eggnog for two weeks before the Christmas party. That resting period gives the mixture the silkiness and integrated flavor he likes. He then combines the aged nog with a fresh batch, which he finds too fluffy and meringuelike.

Also vital to his recipe are the variety and volume of spirits. He pours in quality rum, brandy and bourbon in equal portions. Laying his hands on ingredients is not a problem. As a liquor writer, he has lined his walls with bottles the way others line theirs with books.

This year, he has raised his nog game even further, ordering a few dozen custom-made mugs, each branded with the title of his book.

His guests enjoy his handiwork, but only up to a point. “I think eggnog’s great because you only drink it once or twice a year,” he said. “A lot of people like eggnog. They just don’t want to be standing at a party for three hours drinking it. They’ll have a sip or two and then say, ‘O.K., I’ll have a beer.’”

As for that first batch of aged eggnog, he still has some in the refrigerator — now about five years old. “I just keep that for shock value,” he said.