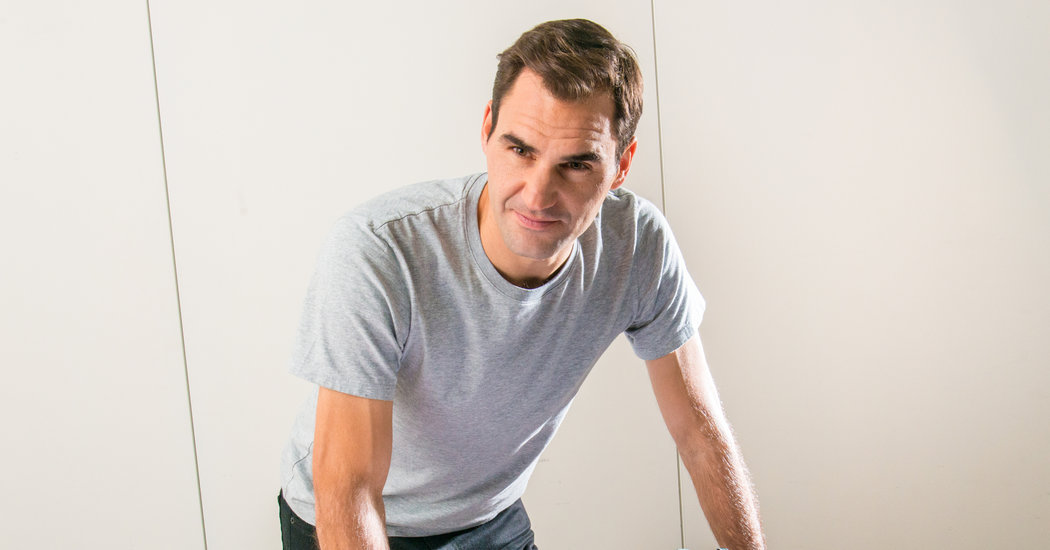 If you run into Roger Federer on your way to board a plane, do not be surprised if he looks you up and down, or mostly down. That’s because Mr. Federer has something of a sneaker fixation.

The Swiss tennis champion is not an “obsessive,” he said (slightly hard to believe about someone who has won 20 Grand Slam trophies), but still he is “always looking at other people’s feet in airports.”

Earlier this month, when Mr. Federer was in London to play in the ATP Finals, he said in an interview that he owns at least 250 pairs of sneakers. Then, pulling on a burnt orange pair with terra cotta laces and distinctive hollow little pods that ran the length of the soles, he acknowledged that that was probably a conservative estimate, given all the shoes he has from past matches.

So, realistically, double? Possibly, he said with a grin.

Mr. Federer, 38, would go on to lose the ATP semifinals, to the eventual winner, Stefanos Tsitsipas, a 21-year-old born the same year Mr. Federer played his first professional tennis game.

Pundits have been predicting Mr. Federer’s retirement for almost a decade. For nearly as long, he has defied their expectations. Lately, however, despite stressing that he is far from finished playing, Mr. Federer has started to talk more openly about what comes next.

That’s where a company called On comes in.

Switzerland, birthplace of both Mr. Federer and On, is often associated with fine chocolate, luxury watches and private bankers. The country “is known for money and for passion but not always for innovation,” said Caspar Coppetti, a founder of On. “It can be quite a conservative place.”

Mr. Federer has become an investor in, as well as a contributing product designer and representative for, the brand, which was started in 2010 in Zurich.

You may not recognize the name immediately (Googling it can be tricky) but you may recognize its cult range of Cloud shoes, which feature an “On” light switch logo, a little Swiss flag and an odd-looking multi-globular cushioned rubber sole. (The patented technology, called CloudTec, gives runners a soft landing but springy takeoff.)

After growing by word of mouth among endurance athletes and Olympians, and in running specialty stores, On is gaining ground as an underdog rival to giants like Nike and Adidas in the performance sports shoe category.

“Fans seem to think of us as an athletes’ insider secret,” said Olivier Bernhard, a duathlon and Ironman champion and one of On’s three founders, over salad at the company’s bustling Zurich headquarters. But in Germany, the Cloud has become the second most-sold sneaker after Nike’s Air Max 270, according to NPD a research firm; in America, now On’s largest market, increasingly the shoes are a mainstay of gym floors on the East and West coasts.

Fashion figures like J.W. Anderson wear Clouds; so do Hollywood types like Will Smith, John Malkovich and Emma Stone (the company said it does not pay people to wear its products).

When Mr. Bernhard and his co-founders, Mr. Coppetti and David Allemann, considered next steps and bringing on a new partner, their thoughts turned to the most famous Swiss person in the world.

“Yes we have chocolate and watches, but Roger is one of the biggest Swiss exports ever and has done wonders for the image of Switzerland abroad,” Mr. Coppetti said.

When most people think of Mr. Federer, widely considered one of the greatest sportsmen of his generation, they probably don’t think of a fashion revolutionary.

Instead, they likely think of his championships, two-decade-long career and huge global fan base.

Still, a close friendship with Anna Wintour, the editor in chief of Vogue, has honed an interest in the fashion world, and Mr. Federer has graced his fair share of Met Gala red carpets, magazine covers and runway front rows.

“I learned to embrace personal style a while ago, both on and off the court,” Mr. Federer said, noting that sneakers were increasingly a part of men’s style.

After a decades-long sponsorship agreement with Nike ended in 2018, Mr. Federer signed an apparel contract with Uniqlo reportedly worth $300 million. He has signed numerous other brand partnerships, including with Rolex, Moët & Chandon, Mercedes-Benz, Rimowa, NetJets and Credit Suisse.

Among the timepieces, luggage, bubbly and luxury conveyances, however, there was an opening in footwear. Mr. Federer had originally met the On founders over dinner two years ago, several years after he had first noticed how many people in Switzerland were wearing their shoes.

“They were impossible to ignore because everyone had them, people on the street, my friends, my wife,” he said. “At first, I thought that they were a little strange to look at, then I realized I actually really liked the design.”

Mr. Federer also has some hometown pride: “We like it when little Swiss guys make a move on the big international stage.”

Mr. Federer started to wear Ons for his sprints training, and has been building a relationship with the brand ever since. Even before anything was signed by him or his longtime agent Tony Godsick, Mr. Federer said, he had been going to the On office every time he was in Zurich to give feedback on product colors and cuts, growth ideas and marketing. (He is building his family a lakeside residence that is about a 25 minute-drive away from the headquarters for when he retires from professional tennis.)

Federer-designed products are already in the pipeline for next year, and he will represent the brand publicly, though he also ticked off other responsibilities.

“Brand building and global marketing,” he said. “How to connect with fans across cultures. And I think I can motivate employees from a leadership perspective too, on how to stay humble but dream big.”

Neither Mr. Federer, who is the highest paid tennis player in the world, with a net worth estimated to be around $450 million, nor the On founders, would specify the financial terms of the deal.

“It’s a very meaningful investment both for Roger, and also for On,” Mr. Allemann said.

Mr. Federer’s arrival at On comes at an important time in the evolution of both the brand and the 50-year-old global sneaker market, where, historically, so-called performance categories (tennis, running, basketball, cross-training) have driven industry growth.

According to its founders, On has been profitable since 2014 Its sneakers are sold in 55 countries, there are almost 500 employees, and the company has also started producing all day, hiking and trail running footwear, as well as sports apparel.

For the past four years, however, the popularity of performance shoes has been dwindling. In their place are sports lifestyle shoes — sports-inspired or fashion-forward sneakers that are not intended for sports use — which are set to become the largest footwear category in the United States, according to NPD.

Matt Powell, a senior industry adviser on sports for NPD, said that, for now at least, On appears to be bucking that trend.

“Many people are no longer in need of expensive and highly technical sneakers — they just want to look good,” Mr. Powell said. “But there are still tens of millions of people out there who are runners who do want those types of shoes, and increasingly want unique brands that others don’t have.”

On, he said, is catering to that crowd. “But the signature On aesthetic — which is very design forward — has also appealed to tastemakers from the sneaker community,” he said. “It’s pretty clear it wants to be more than a niche running brand.”

It may not rank in the booming sneaker resale market, or feature in the most hyped of sneaker drops, but On’s position at the intersection of fashion, performance and outdoor lifestyles mean it is gaining traction with a casually attired, digitally connected and health-conscious professional class. Which is where Mr. Federer — and possibly much of his fan base — come in.

“Sometimes, as an athlete of a certain age, you can feel like a falling star,” Mr. Federer said. “You can almost feel your image and success fading.”

In the past, he said, he never used to want to dwell on life after tennis. “Now,” he said, “it feels good committing to what will come next.”