In the Swiss Alps, Walking a Cliff’s Edge to History

Just outside the train station in the Swiss town of Sion, a yellow signpost points hikers in two main directions with no fewer than 16 routes to choose from. As you cross the medieval downtown, keeping the Valère Basilica and the Tourbillon Castle on the right, aim for the Valaisanne Brewery. If you can resist the brewery’s new tap room and its outdoor tables, be sure to duck as you scramble up a staircase and through the tunnel of holly and its busy bees and onto the Bisse de Clavau and 500 years of history.

Now you can relax. The babbling flow of water soothes the soul and the Valais sun warms the body. The Bisse de Clavau was built in 1453 to irrigate the terraced vineyards in the region, which is the driest and hottest in all of Switzerland. A bisse (rhymes with peace) is a narrow (two- to six-foot wide) canal that brings water from high-altitude rivers across mountains to irrigate pastures and vineyards.

From the 11th to the early 20th century, about 300 bisses (stretching about 1,200 miles in all) were dug by hand, primarily in the Valais Canton, which is bisected by the Rhone River Valley. Centuries ago workers dug up the channels, flinging the mud and debris next to the canals, thus forming a berm that was used as an elevated walkway. To this day, 80 percent of all pastures and vineyards in Valais are irrigated with water from the bisses, while the paths that run alongside them are excellent for walking or trail running.

Along the Bisse de Clavau, Europe’s tallest drystone walls, the highest at 72 feet, support the often-parched soil. Thirsty walkers can find refreshment at one of the wine bars called guérites, stone outbuildings that vintners used to store tools and take shelter. Located near the start of the trail, the Guérite Brûlefer has a terrace with stunning views that pair perfectly with the crisp white wine.

The Bisse de Clavau arcs across the vineyards for about five miles. Sometimes the bisse is a simple channel, or a metal aqueduct when crossing undulating terrain. Sometimes it disappears into pipes underground or flows into tunnels in the rock.

Then the scenery changes. The rock wall gets taller and the path gets narrower. The Lienne Gorge is up ahead. After a brief tunnel (lighted, thankfully), the bisse goes underground, leaving hikers with the choice of two other bisses that are far more spectacular: the Grand Bisse de Lens or the Bisse de Sillonin. (Or the town of St. Leonard is a 15-minute walk, with train service back to Sion.) 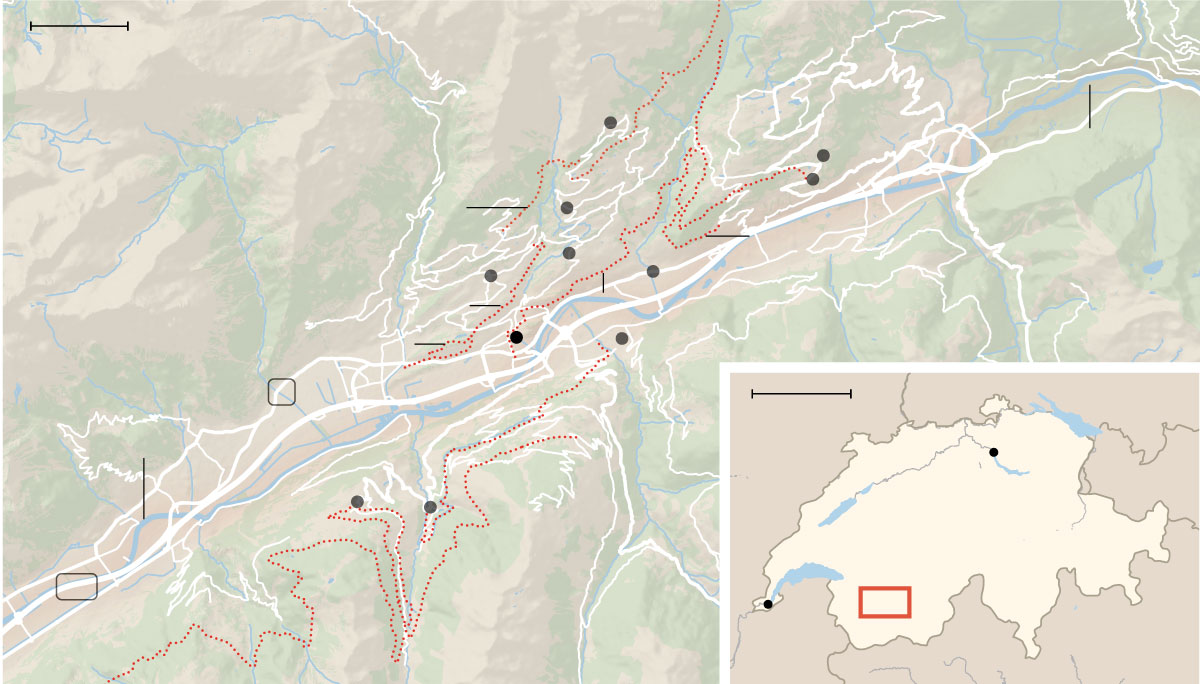 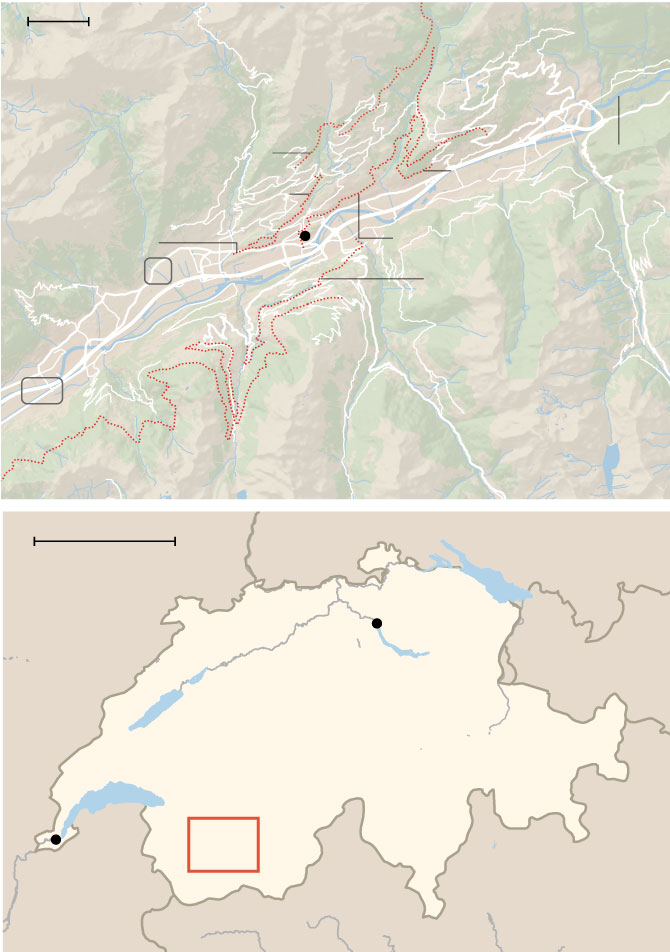 Much farther upstream, lies the Grand Bisse d’Ayent. In September, the new 100 Swiss franc bill was introduced featuring an image of the suspended wooden bisse clinging to the overhanging rock face at Torrent-Croix. For Gaëtan Morard, director of the Bisse Museum in nearby Botyre, “The history of Valais has been written by the bisses. The bisses don’t just carry water; they carry the entire history of Valais. They illustrate man’s ingenious ability to master an unruly environment.”

A path through a vertical landscape

Many bisses are still managed by a consortage, a group — neither public nor private — that is in charge of all aspects of the bisse (repairs, cleaning, enforcing water rights, etc.). A bisse in the upper Valais, in the German-speaking part of the canton, inspired a theory on the shared management of scarce resources developed by Elinor Ostrom, the only woman to have won the Nobel Prize for Economics. The consortages have settled disputes and distributed a scarce resource for more than 500 years.

In his book on the bisses, the most definitive of its kind in English, Guy Bratt wrote: “some of the bisses in Valais are undoubtedly most remarkable examples of tenacity, courage and sheer bloody-minded determination in human achievement.” Perhaps no other bisse exemplifies this centuries-old sacrifice better than the Bisse de Savièse, also known as the Bisse du Torrent-Neuf.

And Patrick Varone is its savior. “People thought I was crazy. No one followed me,” he says of his pioneering plan to restore the bisse in the 1990s. But when he pitched the idea to the local authorities, and 200 people filled the room, his vision started to take shape. The result is a stunning overhaul completed in 2009. It is by far the most thrilling bisse or the most blood-curdling, depending on your fear of heights. It features four, slightly bouncy, suspension bridges, the longest 443 feet and the highest 262 feet.

Between 80,000 and 100,000 visitors make the trip every year, “but about 10 percent turn around when they see the first bridge,” Mr. Varone continued with a hint of a smile. Tourism wasn’t his intention. “I wanted to pay tribute to our ancestors who fought hard to build and maintain the bisse. The mentality was different back then. People today don’t have that kind of courage.” Finding the money required ingenuity as well. The authorities footed one-third of the bill, while commemorative plaques, corporate sponsors and bisse membership fees filled in the rest of the 5.4 million Swiss francs (or $5.5 million).

Starting from the Sainte-Marguerite Chappelle where, from 1430 to 1935, workers would stop to pray en route to the Branlires precipice, visitors are immediately struck by the vertical landscape. The water for most of the next several miles was transported in chenaux, planks of larch wood forming a three-sided channel that was held up by two boutzets, or beams of larch wood. A 20-centimeter, or nearly eight-inch, hole was chiseled into the flaky rock, the beam was placed into the hole, wedges inserted until the beam was tight and the chenal was then laid inside.

Every spring, 200 men, women and children from the town of Savièse would work for one month to repair and clean the bisse to get it ready for when the fields started to dry out. Lives were lost repairing the bisse, and in 1935 the Prabé tunnel was blasted through the mountain to facilitate the water’s passage.

When the Bisse de Savièse was restored, Mr. Varone decided to bypass the most treacherous sections. “I didn’t want to have to repair the bisse every year. We can no longer justify putting people’s lives on the line,” he said.

Visitors — if they dare take their eyes off their feet — can see the old path of the bisse; sometimes it is covered deep with scree in avalanche-prone sections. Mountain goats occasionally send rocks tumbling down the steep embankment, hurtling past the bisse and the wooden overhang protecting hikers. The bisse continues all the way to a 16th-century sawmill that has been painstakingly restored into operation: “You can’t find parts for that on eBay,” Mr. Varone said. The last section, available by reservation only, is a must-see.

Léon Courtine, who worked on the bisse in the 1920s and ’30s, inaugurated the renovation in 2009, proclaiming: “Tant que l’eau coulera, l’homme vivra” — “For as long as water flows, man will live.” As they’ve known for centuries in the Valais, the opposite is true as well.

The tourism potential of the bisses has gone largely untapped. Eric and Martine Danian have been coming to Nendaz, a ski resort on the left bank of the Rhone, for the past 30 years to walk the area’s half dozen bisses: “If I can’t make it one year, I miss it,” Ms. Danian said. “On the bisses you can really disconnect. It’s never too hot because they’re in the shade. The flowing water is really peaceful and provides quietude. You feel light on your feet.”

The area’s Bisse du Mileu (3.2 miles long) to the Bisse Vieux (3.7 miles long) loop is wonderful for families, offering shade as well as views of the Rhone Valley and the Bernese Alps. Between the two, the Café des Bisses offers cuisine that is a big step up from typical mountain food, including a savory lamb burger.

The return on Bisse Vieux offers a surprise. After lulling walkers into a daytime reverie, the path comes upon an art installation consisting of a giant wooden hand that captures the white water of the Dix-Huit Cascade before channeling it back into the bisse. A plaque beside it reads: “Water is only borrowed, by cascading into and out of this hand, water continues its perpetual cycle.”

A walk ending in wine

Hiking is the most popular sport in Switzerland with 44.3 percent of the population having spent an average of 20 days on the trail in 2014. One lesson foreigners quickly learn is to take the times indicated in the hiking brochures and on the trail signs seriously. The average age of Swiss hikers may be 49, but they can move.

Back on the right bank of the Rhone, a decision needs to be made upon reaching the end of the Bisse de Clavau. After a 15-minute scramble up a steep hiking trail, the Grand Bisse de Lens offers intrepid walkers another example of a successful rehabilitation effort. The Grand Bisse de Lens underwent major renovations in 2010 to improve safety and bring water back to a cliff-hanging section made irrelevant by a tunnel built in 1983. It has a storied and well-documented past dating back to about 1448.

After the cliffs, it becomes a highly pleasant walk, complete with a covered picnic table, from which you can observe the “marteau avertisseur,” a water wheel turning a hammer that strikes a plank. The steady banging was like an alarm, letting the caretaker of the bisse know — from a substantial distance away — that the water flow was neither too fast nor too slow and that the bisse wasn’t clogged somewhere upstream. The trail meanders back to public transportation in Chermignon d’En Bas or Diogne.

The other option, which skips the steep uphill, is the Bisse de Sillonin — a bisse with rougher edges. A rope bolted to the rock wall is all that separates walkers from plummeting or sliding hundreds of feet into the gorge. The path is rocky but safe. Small children should be put in backpacks, or otherwise secured, at this point. The views of the other side of the gorge, and the Bisse de Clavau, are impressive.

The bisse was first mentioned in 1367. Recently, however, the water has been channeled underground before re-emerging at the end of the cliff section. Weary hikers are rewarded several miles later at the Château de Vaas (circa the 12th century), which is one of the oldest houses still standing in Switzerland. The paintings on the façade date back to 1576. Inside, the Maison de Cornalin is an ode to a local grape varietal that produces a medium-bodied red wine. The crispy flutes au fromage, cornalin red wine and Valaisan chiffonade (thin-sliced cold cuts) couldn’t come at a better time. After these refreshments, there is a nearby bus stop or an easy 30-minute walk through the vineyards that take you to the valley floor, and — for better or worse — civilization.

From the Sion train station, the ‘bus postal’ can take you closer to the start of many bisses. The bisse association offers an excellent online guide in English to the bisse paths. A list of bisses and useful information is updated by the Musée des Bisses. The tourism offices in the ski resorts of Nendaz and Anzère, as well as Sion, have bisse-related information in English.