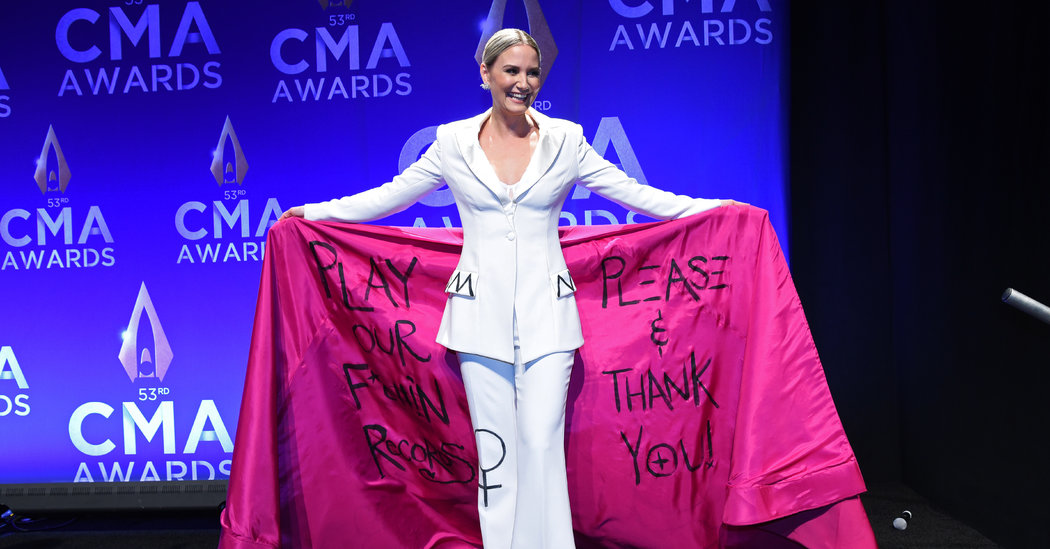 Back in January 2018, the Golden Globes’ all-black fashion moment in support of the Time’s Up movement briefly seemed to hold so much promise as a flexion point in red carpet dressing.

It seemed possible that the night would stand in history as the moment when celebrities ceased to use their entrance-making power to market fashion brands and started to use it to stand up for what they believed.

But it was not to be. The pendulum has not thus far swung meaningfully away from the old dress-up-for-advertising’s-sake mark — and maybe it was always too much to ask.

Nevertheless the moment does seem to have started a drip-drip-drip of change that may ultimately work to reshape expectations and erode old conventions.

That’s how it seems, anyway, judging from the Country Music Awards on Wednesday night. Jennifer Nettles of Sugarland stole the step-and-repeat parade with a cool white crepe-satin tuxedo suit (nipped at the waist, slightly flared at the leg), complete with a hot pink silk faille train etched with a line drawing of a woman’s face and the Venus symbol under the words “Equal Play.”

Scrawled inside was graffiti: “Play our Records” (punctated with an expletive) and “Please & Thank You.”

According to Women of Music Action Network in Nashville, an organization founded to fight gender discrimination in the music business, “in 2018 solo women received approximately 13 percent of the overall airplay on country radio.” Ms. Nettles decided to use her paparazzi soapbox to highlight the issue.

Her pantsuit was made by Christian Siriano, who also worked with the singer on the Sugarland reunion tour in 2018, and who has developed a reputation as a runway/red carpet activist ever since Leslie Jones spoke out against designers not being willing to dress her because of her size, and he stepped up.

The painting was by Alice Mizrachi, an artist known for using female archetypes to address social ills. In other words, there was purpose even behind the people involved in the creation of Ms. Nettles’ look.

As a statement, it was not exactly subtle, but it was very elegantly made. (Some viewers still managed to confuse the text message with “equal pay.”)

And it was probably the most memorable style of the night, even though Ms. Nettles, after appearing in pictures that could go around the world, removed the train and simply wore the pantsuit for the rest of the evening and to take the stage.

“What better and more womanly way to invite such conversation than with fashion that sends a message?!,” she wrote in an Instagram post featuring her look. By Thursday morning it had more than 17,000 likes.

According to Mr. Siriano, the look was Ms. Nettles’s idea. “She said, ‘I want to use this to make a statement that will force people to take notice and listen,” he said in a phone call.

Ms. Nettles’s train is another step in getting past the red carpet as usual. It follows in the tradition of the Carolina Herrera rainbow cape worn by Lena Waithe to the Met Gala in 2018, and the pinstripe Pyer Moss message suit she wore in 2019 (on the back it read, “Black Drag Queens Invented Camp”).

Add to them the various gowns, some by Mr. Siriano, that Billy Porter has been sporting on the red carpet to “flip the question of what it means to be a man,” as he told The New York Times. All of these shrug in the face of the status quo — both the status quo of gender prejudice and of the thriving business that is the celebrity/fashion industrial complex.

You know, the one in which fashion brands sign up celebrities to wear their designs and talk them up when asked that notorious question, “What are you wearing?” (There are varying degrees of payment involved, from free clothes to multiyear payouts.)

Thus far the arrangement has been a very profitable, you-scratch-my-back-I’ll-scratch-yours one, not just for the celebs and brands, but for the whole extended system: agents, managers and the like.

There’s pressure to not rock the boat by getting issues involved, especially issues that could alienate the viewing or listening or buying public.

But judging by the reception of Ms. Nettles’s look, a shift may be underway. The impact, after all, is so much stronger when the fashion statement being made is not just about beauty or functionality, but also a belief system, and justice.

As Mr. Siriano said, “This is a time when no one really listens to anything anymore, there is so much noise. But if you make your statement visually, no one can get away from it. There’s a sense you have to just do it.” Or wear it.

It doesn’t deny the conversation on the red carpet, but rather exploits it, turns the tables so that clothes as a talking point actually make a point. The E! system and our obsessive fascination with what famous people wear may have created a monster, so why shouldn’t the celebrities make it their own monster? That way maybe everybody wins.

This is especially true in a time when report after report say that consumers — the same consumers about to head to the stores to do their holiday shopping — want to buy brands that stand for something, that flash their values on their sleeves. Or, in Ms. Nettles’s case, back and leg.

As we enter awards season yet again, let us hope that she is not an anomaly, but a harbinger.