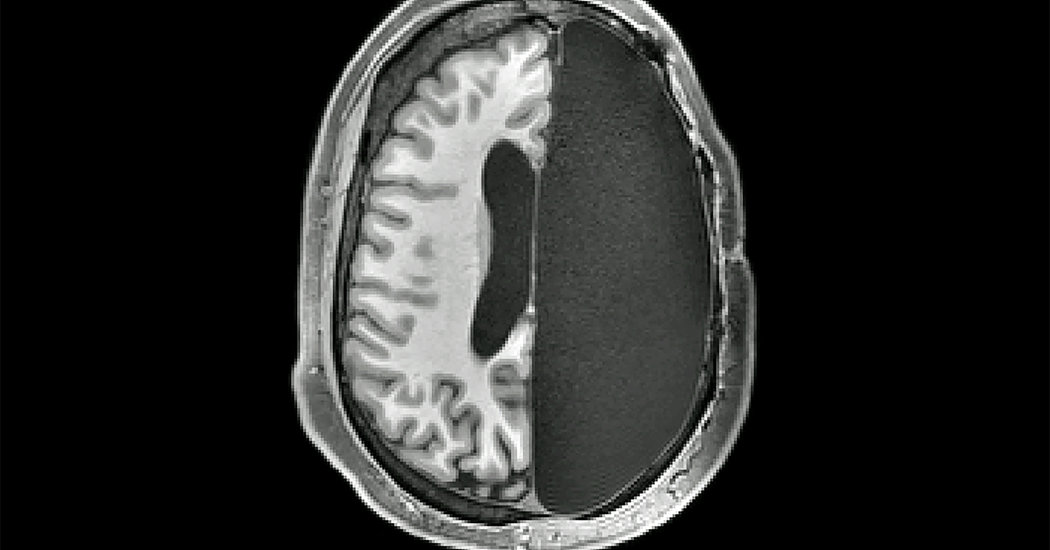 Shortly after the birth of her first son, Monika Jones learned that he had a rare neurological condition that made one side of his brain abnormally large. Her son, Henry, endured hundreds of seizures a day. Despite receiving high doses of medication, his little body seemed like a rag doll as one episode blended into another. He required several surgeries, starting when he was 3 1/2 months old, eventually leading to a complete anatomical hemispherectomy, or the removal of half of his brain, when he turned 3.

The procedure was first developed in the 1920s to treat malignant brain tumors. But its success in children who have brain malformations, intractable seizures or diseases where damage is confined to half the brain, has astonished even seasoned scientists. After the procedure, many of the children are able to walk, talk, read and do everyday tasks. Roughly 20 percent of patients who have the procedure go on to find gainful employment as adults.

Now, research published Tuesday in the journal Cell Reports suggests that some individuals recover so well from the surgery because of a reorganization in the remaining half of the brain. Scientists identified the variety of networks that pick up the slack for the removed tissue, with some of the brain’s specialists learning to operate like generalists.

“The brain is remarkably plastic,” said Dorit Kliemann, a cognitive neuroscientist at the California Institute of Technology, and the first author of the study. “It can compensate for dramatic loss of brain structure, and in some cases the remaining networks can support almost typical cognition.”

The study was partially funded by a nonprofit organization that Mrs. Jones and her husband set up to advocate for others who need surgery to stop seizures. The study’s findings could provide encouragement for those seeking hemispherectomies beyond early childhood.

When individuals who had hemispherectomies came to have their brains scanned for the study, they appeared to behave like other typically developed adults, shaking Dr. Kliemann’s hands and making small talk. But the magnetic resonance imaging, or M.R.I., results showed that the individuals had half of their brains removed during childhood.

“It’s like you need all the different members of a band to play together to get synchronized and coherent music,” said Marlene Behrmann, a cognitive neuroscientist at Carnegie Mellon University, who was not involved in the study.

Instead, researchers found that while the type of connections remained the same in the individuals with just one hemisphere, different regions responsible for processing sensorimotor information, vision, attention and social cues strengthened existing connections, communicating more frequently with each other compared with ordinary brains.

It was almost as if parts of the brain that may have normally been specialized, say, as trumpet players, had talked to the rest of the band and taken additional responsibilities to play percussion instruments as well, Dr. Behrmann said. “Their brain networks seem to be multitasking.”

The results are encouraging for researchers and families trying to understand how the brain adapts and functions after a hemispherectomy.

“I think there’s more and more evidence to suggest that brain plasticity is a really long-lasting phenomena,” said Dr. Ajay Gupta, a pediatric neurologist at the Cleveland Clinic, who has followed nearly 200 children after the surgery.

Until recently, the scientific consensus has been that hemispherectomy surgery is best performed at a very young age, before a child reaches the age of 4 or 5. That way, they can regain normal function as they grow older. While neuroplasticity is stronger in early childhood, the new study suggests that surgery should not be withheld after an arbitrary end date, Dr. Gupta said. Adults in the study had undergone hemispherectomy surgery at ages ranging from 3 months to 11 years old.

A factor that may play a more important role in patient outcomes is the age at which seizures begin to occur. The surgery is still considered a last resort after medical treatment. But if the duration of seizures and resulting brain damage can be limited, patients may recover more function.

“The other hemisphere is already having to handle extra responsibilities before patients get treated,” said Lynn K. Paul, a neuroscientist at California Institute of Technology and a co-author of the study. “It continues to do so when you take out the damaged hemisphere. So what we really want is to protect the hemisphere that’s working.”

The eight-hour operation is not without risks. Brain tissue has to be removed carefully, a section at a time, Dr. Gupta said. If even a small fiber remains behind, it could eventually lead to seizures again and affect the healthy side of the brain. There’s also a risk of continued headaches and fluid buildup in the brain.

After the operation, children become significantly weaker in their hands and arms on the side opposite the operation. Their vision becomes blocked on that side, and they may also lose some ability to recognize where sounds are coming from. “There are some things that definitely require a higher level of rehab and learning. For example, reading and writing and math,” Dr. Gupta said.

In many cases, however, those skills have already been compromised by the underlying diseases.

Mrs. Jones is hopeful that further research, and following more patients over time, will help researchers understand how the brain develops and organizes itself, so that information can help inform targeted interventions for a broad range of individuals with brain injuries and disease.

For now, she is happy that her son can walk independently, communicate with an iPad and eat meals without a feeding tube.

“He really loves McDonalds,” she said.