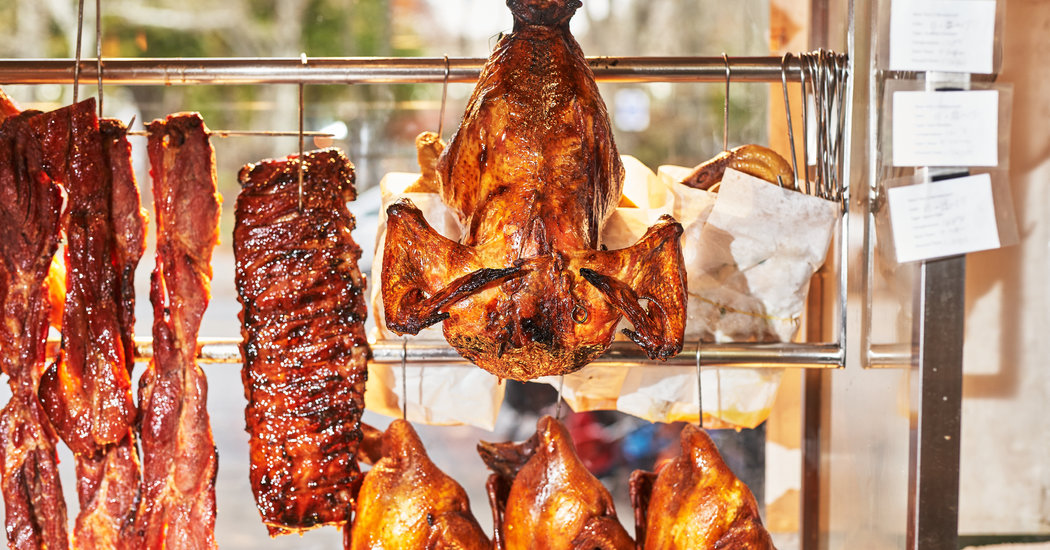 The three days leading up to Thanksgiving are manic at Kau Kau BBQ Market & Restaurant, a mainstay in Seattle’s Chinatown that specializes in Chinese barbecue. At least two extra cooks are brought on to help clean, brine, dry, baste and roast holiday turkeys 24 hours a day in the kitchen’s already packed ovens: crisp-skinned, five-spice-seasoned birds that Kau Kau makes according to the same process it uses for its roast duck.

For that reason, said Richard Chang, who owns Kau Kau with his wife, Lynn Eng-Chang, the restaurant caps orders at about 80 turkeys per year.

“We have to stop there, because we just cannot do any more,” he said.

The restaurant, which Mr. Chang said was opened by his father-in-law, has been making the turkeys for the holiday since the 1970s, initially in response to a few customer requests. Now, all of the first-come-first-served turkey orders typically come in by early November, some from customers who are new to the tradition, others from longtime regulars who helped get it started.

“If they don’t, we usually kind of worry,” Mr. Chang said. “We hope nothing happened to them.”

In Cantonese barbecue shops, Asian supermarkets and Chinese restaurants across the United States, there is one day of the year when roast duck, soy-sauce chicken, char siu and crispy roast pork may be cast aside for plump turkeys. Available from chains like 99 Ranch Market and mom-and-pop shops alike, and often with sticky rice, steamed buns and hoisin-based sauces on the side, these Chinese barbecue-style turkeys provide an inroad to Thanksgiving for many Chinese-Americans. And customers of all backgrounds are embracing the American-born innovation.

Each place makes its own a little differently. But the main draw of a turkey roasted according to the lengthy procedures of professional Chinese barbecue is juicy, flavorful meat.

“The American way can be dry,” Mr. Chang said. “The Chinese way is moist.”

Rather than filling the turkey’s cavity with a bready stuffing to roast, Chinese barbecue cooks typically fill it many hours ahead with a wet, mushy marinade that may include toasted dry spices, onions, garlic, ginger and plenty of salt, then skewer the cavity shut.

The technique, known as “inside brining,” allows the meat to marinate while the turkey is hung up to dry out, typically by its neck — a necessary step so the skin will crisp well. The marinade also helps keep the meat moist while it roasts. (Unlike American-style dry-brined turkeys, in which a much drier salt-and-spice rub is applied to the exterior skin, this Chinese-style brine goes solely inside the cavity.)

It’s a process that has been refined over the years at Hing Lung, a Cantonese barbecue shop in San Francisco’s Chinatown that is owned by the brothers Eric and Simon Cheung. Their father began working at the shop in the 1980s, learning to become a si fu, or master, of barbecue. He passed that knowledge on to his sons, although the brothers have made slight tweaks to the classic recipes. That includes the shop’s Thanksgiving turkey, which dates back to the time before their father joined the business.

For their in-demand turkey, the Cheungs apply a dry rub of Chinese spices like star anise and licorice to the cavity, then fill it with a mixture of onions, garlic and celery. The turkeys, like ducks, are then skewered up to close the cavity, scalded with hot water to tighten the skin and clean off any seasoning mixture, coated in vinegar, and hung to dry for 12 hours. There has been much trial and error over the years; turkeys have fallen off their hooks because they were too heavy, and had to be tossed. But the brothers have gotten a handle on the larger bird.

To further set themselves apart from other Chinese barbecue restaurants in the area, Eric Cheung created a Southern-style cream gravy to go with their turkey, using the necks, gizzards and liver — a twist he said was inspired by his fondness for chicken-fried steak at places like IHOP.

For Hing Lung’s customers, who are predominantly Chinese-American, the turkey strikes a balance, allowing them to assimilate to American holiday conventions without sacrificing their tastes. After all, what could be more American than having things your way?

“They want to celebrate the Thanksgiving tradition, yet they can’t accept the American turkey,” Eric Cheung said.

American turkey can also be hard to cook well. Prone to bland, dry breast meat and blackened wing tips, the bulky bird is a challenge for home cooks all over. This is particularly true when turkey is not part of your cultural culinary tradition.

Justine Lee, who grew up in the 1980s and ’90s in the Bay Area with parents who had immigrated from Taiwan, said her mother tried one year to make turkey using American cookbooks. It was, Ms. Lee said, a complete pain.

“She was worrying about the turkey so much she didn’t have time to think about too many other things,” Ms. Lee said. “I remember it was fine, but at the end of the day my mom was like, ‘I just don’t think this was worth the effort.’” Since then, the family has bought its Thanksgiving turkey from Marina Food, a small grocery chain in California.

While many Chinese-American households choose not to bother with turkey, in some cases it can’t be avoided. About 30 years ago, Chinese-Americans in Chicago started going to Sun Wah BBQ with raw turkeys they had received from their employers as Thanksgiving gifts. Many were totally unaccustomed to using their ovens, let alone for such a large bird, so they asked the restaurant for help. (Ovens are not a typical feature of home kitchens in China, and most Chinese home cooking occurs on the stovetop.)

But at Sun Wah, the professional kitchen and ovens were there. The poultry-roasting wisdom was there. All that had to be swapped in was the type of bird. That, said Ms. Cheng, is what got the restaurant roasting turkeys.

Today, the restaurant handles about 120 turkey orders for Thanksgiving. Ms. Cheng, a second-generation member of the business, admitted that it has become a “logistical nightmare,” but said her family loves doing it for their loyal customers.

Their recipe has also gradually changed to adapt to the oversize bird. They started out with a standard five-spice seasoning based on their roast duck, but found it wasn’t enough to flavor whole turkeys, which have a much higher ratio of meat to skin and bone. They added ginger and cilantro to the inside-brine mixture, and boosted the overall seasoning so it was stronger.

While Ms. Cheng’s brother, Michael Cheng, runs the barbecue operations, she said that the whole family enjoys arguing over how to improve it.

Just as the recipes are changing, so is Sun Wah’s customer base. Ms. Cheng estimates that today, Chinese-Americans are slightly less than half of her customers.

Bryan Cardenas, who is not of Chinese descent, has been serving Sun Wah’s turkey at Thanksgiving for more than a decade. He has also incorporated Chinese flavors into his holiday cooking, tinkering with dishes like his fresh cranberry sauce.

“I added a tablespoon of Chinese five-spice,” he said. “It was out of this world.”

Despite all this, Ms. Cheng isn’t a big fan of turkey, finding it too lean. For many years, her grandmother roasted a whole turkey for the family on Thanksgiving because a relative received it free at work. But no one particularly cared if it was good or not: “The only reason we wanted her to cook it was to make congee the next day,” Ms. Cheng said with a laugh.

For other Chinese-American households, though, the fear of missing out on a national pastime can be a strong motivator. Often, turkey comes at the instigation of the American-raised generation of the family, who grew up learning about Thanksgiving in school, over crafts like hand tracings drawn to resemble turkeys.

“It’s such an ingrained part of American culture that we wanted to bring home, but to my parents, it was still completely foreign to them,” said Andrew Shiue, the Chinese-American writer behind the blog Beyond Chinatown. “We wanted to take part in this American tradition.”

Wilson Tang, the owner of Nom Wah Tea Parlor in Manhattan’s Chinatown, said his family dabbled in roasting turkey at home when he was growing up, with results that were “hit or miss.”

Yee Li, on nearby Bayard Street, became his family’s go-to source. The meat was moister than American-style turkey, Mr. Tang said, and the shop would also carve the turkey in neat pieces, just like a roast duck or soy-sauce chicken.

Although Yee Li closed this year after more than 30 years on Bayard Street, John Chan, a scion of the family that had owned the shop, opened New Yee Li in January in Dyker Heights, Brooklyn, filling a niche for classic Cantonese roast meats and other specialties in an area with a growing population of Chinese immigrants.

Mr. Chan said that when he was young, he tried to avoid working at his family’s restaurant on Thanksgiving because it was so busy with customers picking up their turkeys. Now he is looking forward to continuing the turkey tradition at his new location — though, he acknowledged, it’s not his favorite dish.

“I don’t actually prefer it over my Italian neighbors’ turkey,” Mr. Chan said. “I like how they do turkey, and they tell me they like my turkey.”