A Temple to Techno Opens in Queens 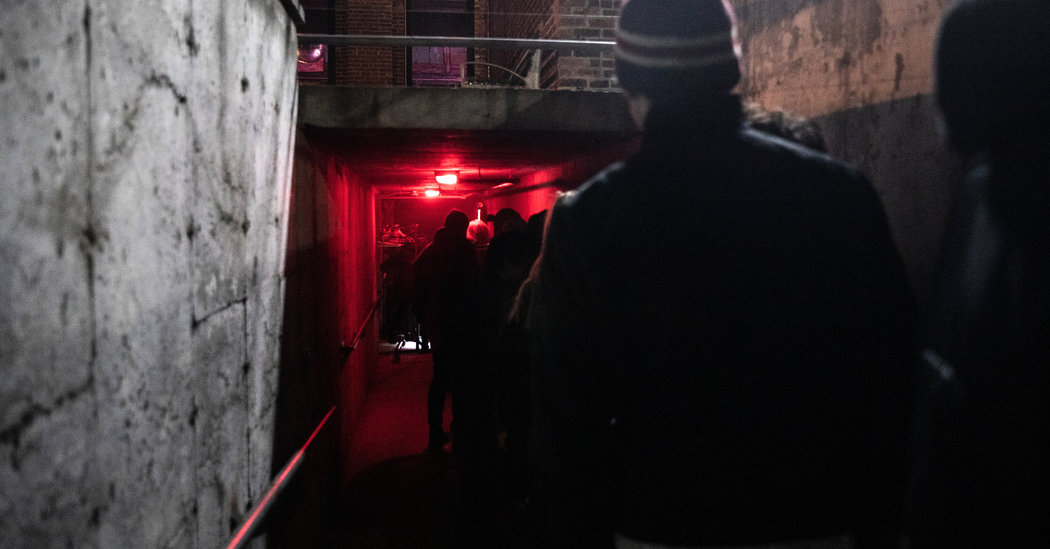 Anyone nostalgic for the Budapest underground club scene circa 1990 will be in their element at Basement, a subterranean nightclub in industrial Queens dedicated to techno music. Drawing inspiration from Berghain in Berlin and the vibrant raves of former Eastern bloc countries, Basement is a conscious (some might say self-conscious) throwback to the pre-iPhone, pre-bottle-service era of clubbing (minus the reek of stale booze and cigarettes).

The newest addition to the sprawling Knockdown Center in the Maspeth section of Queens, the club, which opened in May, lives up to its name: The dungeonlike interior is a warren of nooks and narrow alleyways. The sense of disorientation is reinforced by flickering lights and fog machines. Restrooms are well-lit, unisex and spacious enough for more than one person. Smokers gather outside at incongruous picnic tables. The focus of the club is the dance floor, which is the size of a large living room with concrete pillars, old factory doors and arched brick windows.

On a recent Friday, the club hosted a queer B.D.S.M. party called Bound: Blackout. Fetish gear was mandatory, and partygoers were instructed not to wear street clothing or “culturally appropriative costumes.” Pudgy, middle-aged men were led around the dance floor on leashes by gothic dominatrixes in their 20s. Many patrons were topless and some bottomless. No photos were allowed (masking tape was placed over phone cameras) so patrons would feel comfortable in whatever clothing they wore, or didn’t. Other nights draw a disparate crowd that might include straight bros in their 20s, queer club kids and die-hard techno fans.

The Funktion-One sound system provides an all-encompassing and clean sound. The caliber of D.J.s is very high and includes European avant-gardists with large followings who might play E.B.M. (electric body music), industrial techno and Italo house.

Covers range from $15 to $25. Cedric, the doorman, was friendly and welcoming, even as the night wore on and the line got longer. Partygoers are subjected to pat downs with a metal detector wand.

A single bar serves strong drinks in cans or plastic cups. A Grey Goose and tonic is $13; beers like Modelo Especial are $6 and All Day IPA is $7. A food truck that serves Philly cheesesteaks and hoagies ($15) is often parked outside for exiting patrons.