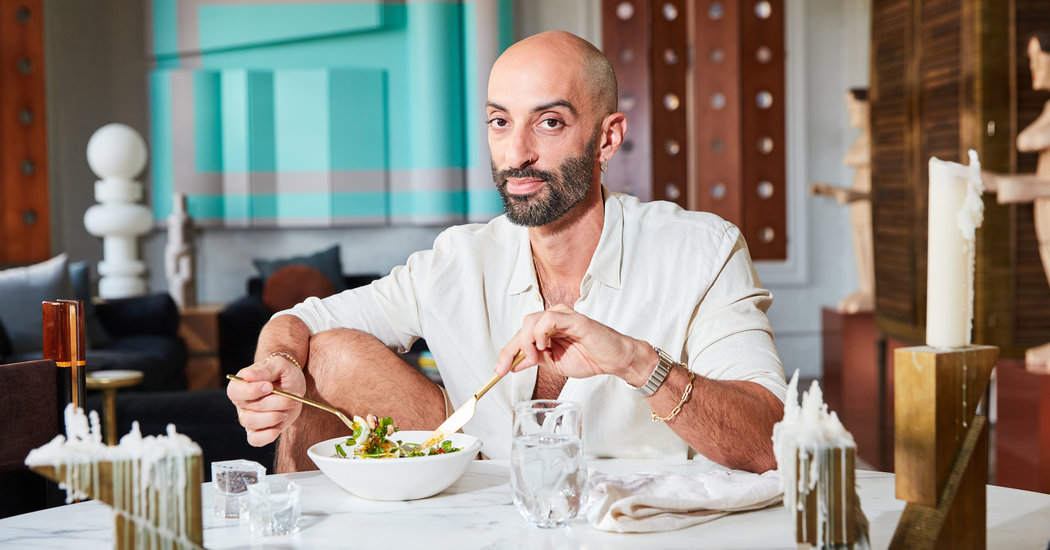 In One Good Meal, we ask cooking-inclined creative people to share the story behind a favorite dish they actually make and eat at home on a regular basis — and not just when they’re trying to impress.

Like a lot of couples, Gabriel Hendifar and Jeremy Anderson — the co-founders of the New York lighting and design studio Apparatus — have distinct roles in the kitchen. “He’s the baker,” Hendifar says of his partner, “the one who roasts and cooks things that require a lot more planning. I’m more of an assembler.”

Being an assembler comes in handy, though, when making a salad. Over the years, Hendifar, 38, has developed a flexible recipe that works any time of day, at any scale, with any number of variations. If it’s beet season, they go in. In the summer, corn does. He can make it at the couple’s apartment north of Union Square or at their weekend house upstate, padding around the kitchen in socked feet with Anderson, 44, while Chet Baker plays on the stereo. “Salads are my thing,” Hendifar says. “I’ve had a love affair with butter lettuce, but I’ve found it doesn’t always support heavier ingredients.” So for the dish below, which includes beans and tomatoes, he replaces the lettuce with hardier pea shoots that form a kind of green nest. The result is a meal that’s both sculptural and functional — just like one of Apparatus’s pieces.

With help from more than 60 employees, Hendifar’s work blends the architectural and the emotional: He tends to present his furniture and design objects with a sense of drama; each collection of late has been known as an “act.” This week, the studio is showing at the Salon Art & Design fair in New York, unveiling a series of limited-edition cabinets, sconces, ceiling pendants, torchiers and a sectional coffee table. Much of the work involves the interplay of intricate embroidery with metal. “A wise person once told me embroidery is the physical manifestation of time,” Hendifar says. “That became the guiding manifesto of the collection.”

The handwork on some of Apparatus’s new pieces took up to 800 hours. Hendifar’s salad, on the other hand, is a lighter lift: From start to finish, it’s on the plate in 20 minutes.

1. In a large bowl, mix the pea shoots with half of the dressing ingredients. Make sure the greens are well coated, then divide among 4 serving bowls.

2. In the original bowl, mix the tomatoes, beans, radishes, dill, parsley and the other half of the dressing ingredients (reserving a pinch of parsley for garnish).

3. Arrange the dressed ingredients on top of the greens in the serving bowls, leaving a divot in the middle to create a nest for the eggs.

4. Peel the eggs and place gently on the salad, one or two per bowl, sliced in half. Season eggs with salt and pepper. Finish with the extra parsley and another shower of Parmesan.