Why We Cook Today 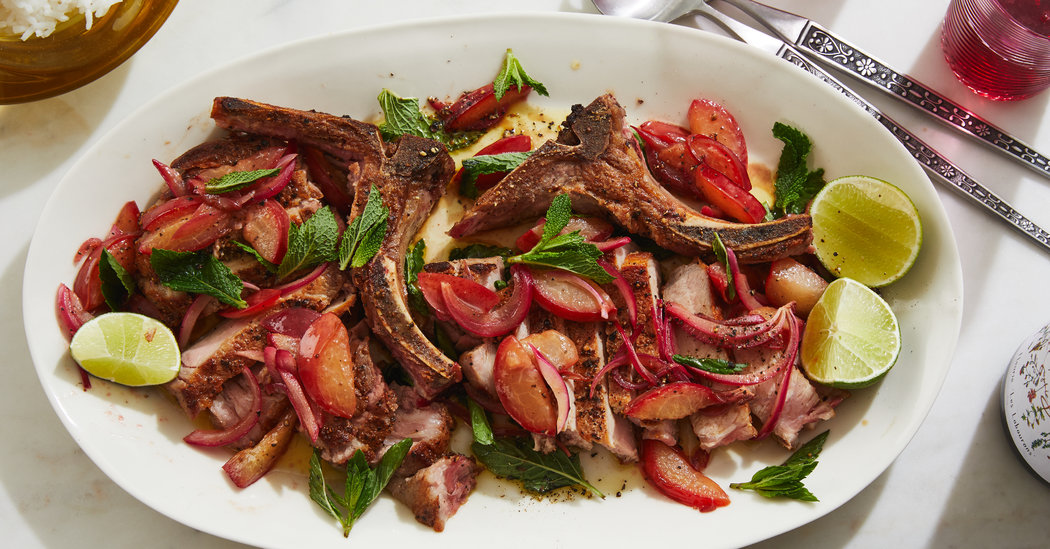 Good morning. It is a somber day in New York City, in Washington, D.C., and Shanksville, Penn., all across the nation, everywhere touched by the attacks of 18 years ago. I can’t help but recall, each time, how blue the sky was that day and how tightly I held my week-old child in horror at what I’d done, bringing life into this world gone mad.

I cooked later that day and served what I’d made to my family. That act sustained me and sustains me still — this vain hope that if only we make food for one another and share it with open hearts we can push forward together in understanding, and together maybe make the world a better place. I don’t know if that works. I believe it does. So I’ll continue to do it, seeking grace in the meals, in the work of making them.

For dinner tonight, then, a couple of possibilities: I love Alison Roman’s latest recipe, for pork chops with fresh salted plums (above), very sweet and sour, with a tangy dressing made of shallots or red onions, topped with mint. I’d like that with rice, maybe some cabbage salad if you have the time.

But I’ve also been thinking a lot about this amazing celery soup I had last month at the Lost Kitchen in Freedom, Me., in a dining room warm and glowing with candlelight and decency: the celery cooked in olive oil with alliums, with new potatoes for heft, the whole thing whizzed into a kind of pale-green perfection. You could make that soup yourself as a kind of no-recipe recipe, I think, with good vegetable stock and judicious use of your blender, then pour the result over a lump of ricotta, a dab or two of cooked crab.

You could. But, for me, the celery was almost more important than the soup, and I cut up a lot of it to pay homage to the chopped celery and beef stir-fry that Peter Meehan put in his ridiculously good cookbook, “Lucky Peach Presents 101 Easy Asian Recipes.” (That recipe is in itself a homage to one that Fuchsia Dunlop has in her terrific Chinese food cookbook, “Every Grain of Rice.” Head to your bookseller immediately for both!)

Here’s how to do it, cooking fast and loose. Dice a couple cups of celery, then quickly blanch them in hot water and drain in a sieve and run them under cold water to stop the cooking. Shake those dry and set aside. Cook a little bit of ground beef in a wok slicked with neutral oil and, when it’s no longer pink and watery but starting to crisp and bubble, hit it with a big, sloppy tablespoon or two of gochujang or other spicy chili-bean paste. Cook all that for a while, stir-frying it, then add a few tablespoons of minced ginger to the mix. Stir and fry, then add the blanched celery, let it get hot and serve, drizzled with a little soy sauce and a spray of black vinegar if you have any. I like that with noodles or rice, myself.

Other things to cook tonight, for comfort in the storm of our memories: cauliflower Parm; smothered chicken; a hasselback kielbasa; oyakodon; goat-cheese soufflazy.

You can find thousands and thousands more recipes to cook tonight or in coming days on NYT Cooking. (You’ll need a subscription.) Please visit us, too, on our Instagram and Twitter pages, and on Facebook and YouTube. (Entrance is free, if you’re game for going off-piste.) And please write if you run into trouble with anything along the way, either with your cooking or our technology: cookingcare@nytimes.com.

Now, it’s a long drive down the Pacific Coast Highway from the subject of home cooking, but I’ve listened to this new Lana Del Rey track, “Bartender,” about 10,000 times in the last week or so, and I think Paul Cavalconte is exactly right to place it in the tradition of the music of Laurel Canyon in the ’60s and ’70s.

Sticking with Southern California and music, do read Jesse Pearson on the punk-rock legend Mike Watt cruising around San Pedro and eating sandwiches, in The Los Angeles Times. (Here’s Watt playing with the Minutemen in Philadelphia in 1983, and if the sound is terrible and the video shaky, the clip still gives a sense of the band’s energy, of how electrifying it could be.)

Finally, maybe you’d like to hang out sometime? If you’re in Texas, you might join our Kim Severson talking corn dogs and politics with national political correspondent Jonathan Martin at “Politics Live With The New York Times,” in Austin, Texas, on Sept. 27, part of the Texas Tribune Festival.

Or, if you’re in or around New York, tickets go on sale on Sept. 14 for “The Nights,” a curated series of dinners in some of our critic Pete Wells’s favorite restaurants in New York. The dinners are part of The New York Times Food Festival that will take over Bryant Park on Oct. 5 and 6, with the best of Smorgasburg. See you there and maybe at dinner as well! Hope you get tickets. I’ll be back on Friday.