Where to Find a Ceramic Christmas Tree? 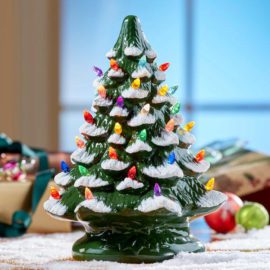 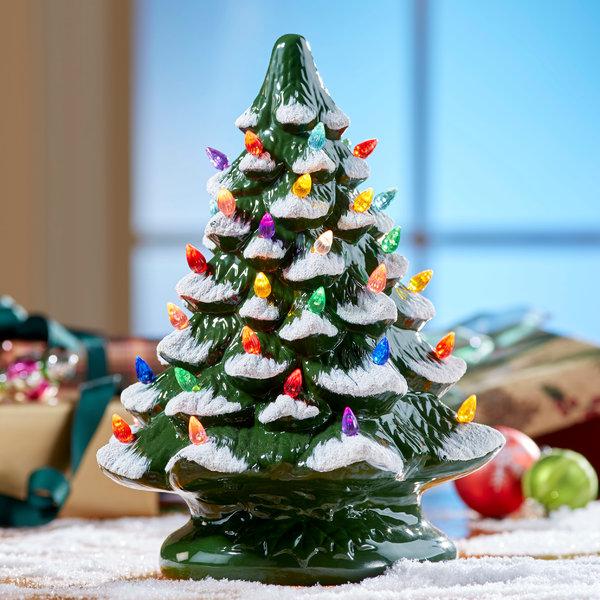 For a fragile piece of kitschy clay, the light-up ceramic Christmas tree is a remarkably durable piece of holiday nostalgia.

A D.I.Y. crafts-class staple in the 1970s, this old-style decoration (a perforated pine tree-shaped shell with a single bulb at its core, stuck with glowing Lite Brite-style plastic pegs) is having a glimmering moment again after years in the attic. These new ones are mass-produced, but they still shine.

The Sharper Image catalog, for instance, carries a “Nostalgic Christmas Tree” measuring 18 inches. A musical version from the Cyndi Lauper Christmas Collection, touted as “even cooler than the vintage” because it plays 15 instrumental songs, is sold out on grandinroad.com. Even CVS, the national drugstore chain, is stocking a 12-and-a-half-inch version. Called “Merry Brite,” it sells for about 20 dollars. Not that much for such a memory-jogger.

“Through our research, we identified ‘retro’ — a nostalgic nod to classic ornaments and treasured decorations handed down from generations past — as a key trend” this season, said Susanne Overson, a senior buyer at Target. The discount chain began carrying ceramic trees last year. Now Target sells both white and green “Mr. Christmas” editions in two sizes, seven- and 14-inch, plus ornament-size ones to hang on regular Christmas trees.

“When my colleagues and I discovered these ceramic trees, we knew they were the perfect fit,” Ms. Overson said. “Most of us had very fond memories of similar styles from childhood.” Indeed, her mother used to put one in every bedroom during the holidays. “To this day, I can still picture the little colorful lights twinkling on the walls of my room,” she said.

When Christopher Radko, the author and event planner who ran an eponymous Christmas ornament company for decades, was growing up, he had one in blue and his sister had one in pink, each painted by their mother. Perhaps because those trees were lost over the years, Mr. Radko is cheered by the return and hopes more color choices will appear in the years ahead.

Ceramic trees, he said, “are pretty amazing. They don’t take up much room. You can put one in your kitchen. You can take one to work. They look kind of classy, in a funny way, because they’re ceramic, not plastic or Styrofoam. They’re like little bouquets of flowers.”

The way we fir: In 1972, Noelle Johnson adjusted miniature lights on a ceramic tree; a music box at base of tree played “O Tannenbaum.»CreditMillard Smith/The Denver Post, via Getty Images

Their appeal is old news to the Vermont Country Store, a catalog trafficking in nostalgic products since 1949. It has been selling new-but-accurate replicas of ceramic Christmas trees since 2001.

As Eliot Orton, who, with his siblings, runs the family company, tells the story, a number of customers years ago wrote in requesting ceramic Christmas trees, so the company found an original mold and began reproducing them. Theirs, unlike most new ones, have removable bulbs like the originals did. “What we try to do is create something that’s authentic,” he said.

It’s not just trees that are hot this year but all manner of holiday ceramics, Mr. Orton said. Flying Angel Candle Huggers, anyone? He’s got them. “It’s great to get that little thing that’s going to offer some delight in our customers’ lives and bring some magic into their homes at Christmastime,” he said. His company’s 13-inch trees cost about $40. Bulbs shaped like birds or holly leaves are available. Candle huggers? About 30 bucks, matching candle holders included.

Those customers who must have a vintage ceramic Christmas tree can expect to spend more, unless they get lucky at a thrift shop or an estate sale. In antique stores, original ones can fetch $75 or more, said Kristopher Kyer, an actor and former circus ringmaster who runs a seasonal boutique called Kristopher Kyer’s Christmas Corner in Burbank, Calif.

Mr. Kyer’s “museum of vintage Christmas” carries only evergreens made by crafty hands back in the day. “These are homegrown trees,” he said, adding that the old ones have a timeworn patina that the brightly colored new models lack.

Unconcerned with the prices, some customers have amassed extensive collections of ceramic Christmas trees that they display every year, he noted. “There are people who have tons of them. When they see one they don’t have, there’s a gasp,” Mr. Kyer said, adding “It’s a sickness, but isn’t it wonderful?”

FacebookshareGoogle+sharePinterestpin it
Q&A: Albinism Strips Pigment From the Body, Including the EyesMedical News Today: How to identify and treat snake bites
Latest