What Could Come Between These Two Allies? A $100 Jar of Honey 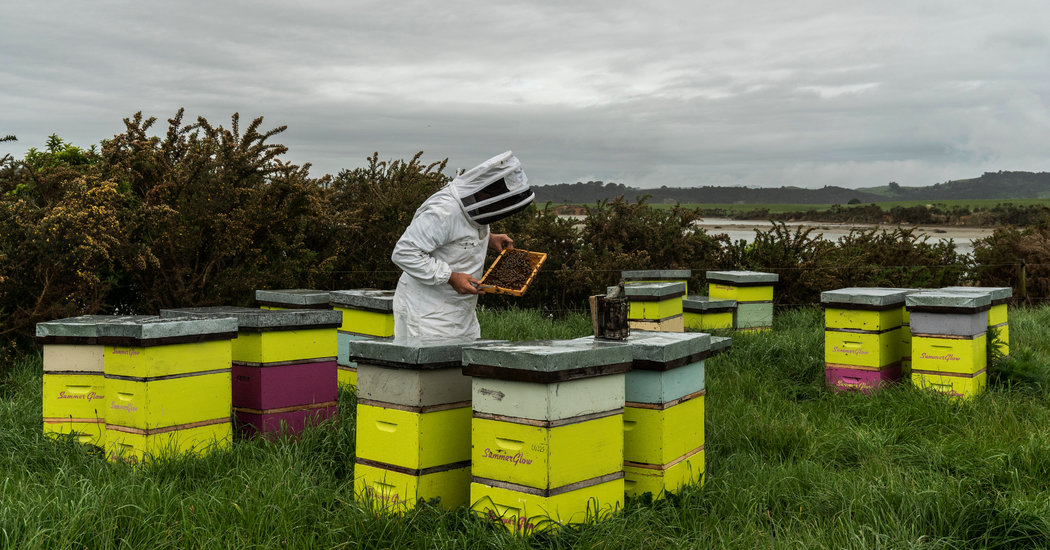 Not just any honey, mind you — this stuff isn’t sold in plastic bear-shaped bottles. It’s manuka honey, a high-priced nectar ballyhooed by celebrities as a health and beauty elixir. (Scarlett Johansson smears it on her face; Laura Dern heals her children with it.)

Manuka-branded honey is so valuable that New Zealand producers have gone to court to argue that they alone should have the right to sell it, in much the same way that only France can claim Champagne with a capital C. They say they are the only source of guaranteed authentic manuka honey, from a single species of bush; their Australian counterparts have marshaled a point-by-point rebuttal that stretches all the way back to the Cretaceous Period.

That has left these two neighbors, so closely bound that Australia’s Constitution still welcomes New Zealand to become one of its states, locked in a bitter dispute encompassing science, culture, history and, yes, cold, hard commerce.

“For us, it’s a kick in the guts,” said Bert Seagrave, an Australian farmer with 4,200 beehives in the state of New South Wales. Losing the ability to brand his honey as manuka would cost him half a million dollars a year, he said.

Manuka honey sells for roughly $100 for 500 grams, or about 18 ounces, though higher grades can cost more. It has a nuttier taste than regular table honey, though at that price not many people are likely to be spreading it on their morning toast. Its promoters say it can soothe gastric inflammation and even help treat cuts and burns.

New Zealand makers of the honey have applied for trademarks in their own country as well as in Britain, the European Union, the United States and China — an especially lucrative market — among other places. Australian producers have filed papers in New Zealand and Britain opposing the applications.

The New Zealanders say they have been compelled to take legal action in part because Australian producers are trying to get away with selling an inferior product.

The dispute revolves around the precise type of bush the honey is derived from. In New Zealand, manuka honey comes solely from the nectar of a plant known as Leptospermum scoparium, commonly called a manuka bush. The Australian honey, the New Zealanders argue, comes not only from that bush but also from dozens of other species in the same genus.

The Australians are “literally selling 80 different species as the same,” said Tony Wright, the general manager for market access at Comvita, one of New Zealand’s largest producers of manuka honey. That, he added, was a bit like “generalizing all the almonds and apricots and calling them plums.”

Producers in Australia, Mr. Wright said, are “glossing over the details, and the consumer is getting ripped off, because you can measure all those honeys and measure the antibacterial effect.” The elements of manuka honey are said to be so special that New Zealand makers have even created grading systems to rate its potency — one is called the Unique Manuka Factor.

But the Australians say their New Zealand counterparts are making a distinction without a difference.

They say the Australian bushes in the genus Leptospermum are so closely related to the New Zealand bush as to be nearly indistinguishable, noting that until about 65 million years ago, Australia and New Zealand were part of the same landmass and shared the same species.

Ben McKee, the chief executive of Capilano Honey, Australia’s biggest honey producer, has reams of scientific research to back his product’s health value, as well as Australian news clippings from the 1800s with references to the manuka bush, which until a few decades ago was considered by all parties to be little more than a weed.

Beyond the argument over science, New Zealand producers make a cultural claim, based on the word manuka itself, which originated with the Maori, the country’s Indigenous people.

That adds a layer of sensitivity to the issue that cannot be ignored in any discussions with Australian producers, according to John Rawcliffe, a spokesman for the Unique Manuka Factor Honey Association in Auckland, New Zealand.

“If you want to come to the table and say manuka is not a Maori word, you will get nowhere,” he said of Australians who have made such assertions.

And then, of course, there’s the money. New Zealand’s manuka honey industry is worth about $220 million a year, and the producers have set a goal of increasing that to about $700 million within the next few years.

Peter Brooks, a chemist in Australia whose laboratories have studied and tested manuka honey from both countries for years, said he believed that New Zealand wanted to achieve that growth by cornering the market.

“They can’t produce more honey,” he said. “If they knock Australia out of the marketplace, they can increase the price of the product fourfold.”

But it is not just about Australia, said Mr. Rawcliffe, the New Zealand honey association official.

He said that the trademark actions had been filed because manuka bushes were being planted and harvested in places like Spain, Serbia, Italy and China, and that inferior products could flood the market.

Still, the feud with Australia is “not nice,” Mr. Rawcliffe said. “Australia is Big Brother, and we have a very strong relationship, but this is Little Brother’s” product.

The two siblings do indeed have strong trade and security ties. They have fought wars together and their leaders meet every year. But they do squabble, sometimes bitterly, most recently over Australia’s deportation of hundreds of New Zealanders, many on grounds of “character.”

One source of anger among Australians in the honey dispute is the fact that the New Zealand government recently stepped in to help fund the legal campaign. Australian beekeepers have struggled to get assistance from their government.

But Australian producers may yet get help from an unlikely source. Tom Walters, the head of the Maori Research Institute, whose tribal lands in New Zealand are leased to honey producers, said he was so aghast at the actions of Mr. Rawcliffe and his fellow campaigners that he was reconsidering the terms of those deals.

“I think it is absolutely ludicrous that two countries so blessed with such a wonderful product should be going to court and bastardizing the name manuka,” he said. “Rather, we should put those funds together, collaborate and put all that money into science and research to supply the world with more honey.”

FacebookshareGoogle+sharePinterestpin it
Medical News Today: How waste gets ‘washed out’ of our brains during sleepAfter Her Illness Was Misdiagnosed as Madness, Susannah Cahalan Tackles Madness in Medicine
Latest