Under the Influence of a ‘Super Bloom’ 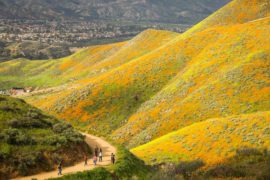 “At the beginning of the year, if you told me this is what we were going to be dealing with, I would have called you crazy,” said Steve Manos, the mayor of Lake Elsinore, a small town in Southern California. He was taking a brief reprieve from dealing with the biggest crisis of his short term in office yet: an explosion of picture-perfect California poppies in the Temescal Mountains, just northwest of the center of town.

“The poppy bloom in Lake Elsinore is unlike anything I’ve seen in my 32 years living in Lake Elsinore,” he said. “The flowers are especially vibrant in color, they are numerous and they’re covering the entire mountain.”

The problem for the mayor isn’t the flame-orange poppies themselves, which blossom in the springtime after heavy winter rains follow an extended drought. It’s their adoring, smartphone-equipped fans, who have shown up in droves over the past three weeks, bringing with them horrible traffic and occasionally horrible etiquette when they wander off the trail to pose with, trample or even pick the poppies. 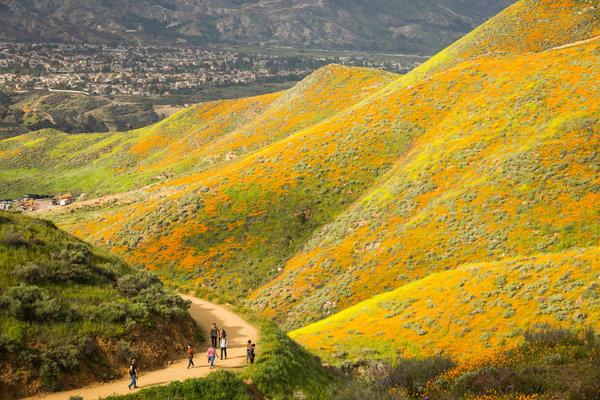 This year, the spring poppy bloom has been so popular with visitors that the city of Lake Elsinore, Calif., tried to intervene. CreditEmily Berl for The New York Times

The first week of March, when the buds first turned to blooms, “there were a couple of social media influencers who came out and decided to take advantage of the beautiful backdrop,” Mr. Manos recalled. “We saw an explosion in interest and — all of sudden — lots and lots of visitors.” As many as 100,000 over the course of St. Patrick’s Day weekend, to be more precise.

Perhaps no one had a better plan than Jaci Marie Smith, a 24-year-old influencer from Los Angeles with more than 400,000 Instagram followers. In a post from March 1, she is shown nestled amid poppy blossoms in an all-orange outfit of overalls and a henley, with a wide-brimmed hat atop her head. A single orange poppy pokes out of her mouth. Some 60,000 people liked that post, and on March 5, she posted more poppy content — this time, of her holding a bouquet of the flowers — as a vehicle to promote a brand of press-on nails (“$7.99 at Ulta, CVS, Walgreens, Walmart, Rite Aid, or impressmanicure.com!”).

“You’ll never influence the world by trying to be like it,” read Ms. Smith’s first poppy photo caption. And yet, as more people posed for poppy pictures, and international news outlets picked up the story, influence the world they did. Within three weeks, so many people were influenced to come pose in the flowery hills that the city had to figure out how to intervene. After a Lake Elsinore official was hit by a car, and a visitor was bit by a rattlesnake, the city shut down access to Walker Canyon, the main trailhead, from the nearest roads and set up a $5 shuttle service to bring visitors from the local outlet malls. But the hordes found other places to park and walk in, and the city lacked the manpower to enforce the closure.

“They’re going out there with wedding dresses on, Sunday best, Easter clothes,” said Sharron Tolbert, who lives two miles from the trailhead. “For the most part, they don’t care,” she said, referencing the closures that were meant to slow the traffic of influencers. “They pull over and get out of the car.” (The city later surrendered control, posting on Facebook, “At this time, it is not feasible for us to keep visitors away from #WalkerCanyon.”)

Then came the backlash online. Inspired by Ms. Smith, Gulin Cetin shared her own Instagram poppy post on March 5 with her 49,000 followers (wearing a hat of the same make, paired with a gingham wrap dress that matched the hills and flowers). But after Los Angeles magazine included Ms. Cetin’s image in a post excoriating the scourge of off-trail, poppy-picking influencers, Ms. Cetin’s post began filling up with negative comments. “Stop ruining the flowers for your selfish selfies,” wrote one follower. Hashtags like #Horribleperson began popping up in comments on any photos geotagged at Lake Elsinore in which it appeared someone might be mistreating the poppies.

But the anger is also pronounced among locals — and not necessarily because they’re worried about the poppies’ well-being. “I don’t care about going to see them because I have severe allergies,” said Ms. Tolbert. She’s more concerned with navigating three hours of traffic on the freeway just to get home from work. “I literally just broke down crying two days in a row,” she said. “I just couldn’t take it anymore.”

The overall economic impact of super-bloom tourism has yet to be determined. At Jack’s BBQ Shack, the head of human resources, Leslie Lloyd, reported that the restaurant had its “best weekend out of five years because of the poppies.” Ribs were selling out before 11 a.m. But for businesses that involve moving around town, like the plumbing company Darrell Brown works for in nearby Murrieta, Calif., the so-called #PoppyApocalypse is much more dire. “I told our office, don’t send people there,” he said of Lake Elsinore, after hearing rumors of how bad the traffic was. “We lost somewhere between five and eight thousand dollars just on Saturday alone.”

Other sites that are expecting significant wildflower blooms this year, like Joshua Tree National Park, are major year-round attractions that have visitor centers and ample parking. The same goes for Anza-Borrego Desert State Park and Antelope Valley California Poppy Reserve, where other so-called “super blooms” are already flourishing. Walker Canyon, on the other hand, doesn’t have permanent toilets or a shop to buy water.

“We are not really trying at this time to figure out how to monetize the event in any way shape or form,” said the mayor. After conferencing with the California Highway Patrol, city officials decided to ban parking near the trailhead this weekend and double the shuttle price to $10. Forty additional deputies from the Riverside County Sheriff’s Department will help guide traffic.

Occasionally, a food truck parks near the trailhead, which is walking distance from the freeway overpass. Overflow traffic backs up into the offramps, and there’s a thick sense of despair among the cars stuck in traffic — the type of anxiety associated with the worst L.A. traffic or music festival parking lots, but even more unpredictable. Last Wednesday, the parking situation along Walker Canyon Road was dog-eat-dog, with drivers stopping and idling in the middle of the road whenever they saw a hiker emerge from the trail who might free up a parking space.

This rare spectacle seems to be worth the trouble for many visitors. The last major super bloom in Lake Elsinore, and perhaps the first of the Instagram era, was in 2017, thanks to another consistently rainy winter. Last year’s drier winter prevented a bloom. But it also paved the way for this year’s explosion, because the dry winter killed off some of the nonnative plants that compete with the poppy. But the poppies may be no match for the more destructive invasive species: the influencer who gets too close. “Poppies die quickly when they’re stepped on,” said Jean Rhyne, an interpreter for California State Parks. “Even when people walk between them, it crushes the roots,” she said, creating unofficial trails amid the flowers and encouraging more destructive foot traffic.

Ms. Cetin, whose Instagram was flooded with angry comments, said she used Photoshop to create a fuller flower effect in her posts. “We went there and we actually brought our own flowers, not to pick the poppies,” she said.

Other influencers have also made a point of declaring their respectful intentions. Jacob Fu, a travel blogger, said, “When we’re out there we’re always aware of that and trying to be very responsible of how we take the photos and staying on trails.” In an Instagram post that showed his wife, Esther JuLee, surrounded by the poppies, he offered a tip to hopeful poppy photographers: “There are plenty of dirt trails to walk around in. If you shoot from a low vantage point or from farther away, you can still look like you’re in the flowers.”

FacebookshareGoogle+sharePinterestpin it
What to Do When You Are a Runner Who Can’t Run on Race DayMedical News Today: Can scientists learn to remove bad memories?
Latest