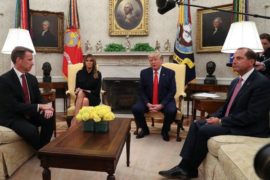 WASHINGTON — The Trump administration said on Wednesday that it would ban the sale of most flavored e-cigarettes, at a time when hundreds of people have been sickened by mysterious lung illnesses and teenage vaping continues to rise.

Sitting in the Oval Office with the government’s top health officials, President Trump acknowledged that there was a vaping problem and said: “We can’t allow people to get sick. And we can’t have our kids be so affected.”

Alex M. Azar II, the health and human services secretary, said that the Food and Drug Administration would outline a plan within the coming weeks for removing flavored e-cigarettes and nicotine pods from the market, excluding tobacco flavors. The ban would include mint and menthol, popular varieties that manufacturers have argued should not be considered flavors.

The White House and the F.D.A. have faced mounting pressure from lawmakers, public health officials, parents and educators, who have grown alarmed by the popularity of vaping among teenagers but have felt powerless to keep e-cigarettes away from students and out of schools.

This summer’s startling reports of vaping-related respiratory illnesses, which now near 500 cases in nearly three dozen states and have possible links to six deaths, have only amplified concerns and renewed calls for a total ban on the largely unregulated pipeline of e-cigarette and cannabis vaping products.

Just last week, Michigan became the first state to prohibit the sale of flavored e-cigarettes. Gov. Andrew M. Cuomo of New York also called for a ban, and Massachusetts and California are considering similar measures. San Francisco approved an e-cigarette ban earlier this year, which Juul Labs, the dominant seller in the United States, is lobbying to reverse through a ballot initiative this November.

Last year, the F.D.A. retreated from a threat to prohibit the sale of e-cigarettes as the increased rates of teenage use took public health experts by surprise. Public outrage stoked by accusations that Juul Labs was deliberately targeting youths led the company to voluntarily stop shipping most flavored pods, like mango and cucumber, to thousands of retail locations around the country.

Agency officials had hoped that making flavored products less accessible would reduce teenage use of the popular devices, but instead the latest figures show another increase in youth vaping, Mr. Azar said, after meeting with the president on Wednesday.

Five million minors, mostly in their high school years, reported that they had used e-cigarettes recently, he said. About one-quarter of the nation’s high school students reported vaping within the last 30 days in this year’s annual survey, up from 20 percent last year.

Speaking to reporters on the White House lawn, Mr. Azar said that removing flavor pods from stores just prompted youths to shift from fruit flavors to menthol and mint, which were still available, rather than to stop vaping altogether.

“What we’ve seen has been, and it may be connected, a huge spiking of children’s utilization of mint and menthol e-cigarettes, which remain, by all manufacturers, available in retail stores,” Mr. Azar said.

The issue appeared to hit home at the White House, where Melania Trump attended the meeting with Mr. Azar, Dr. Ned Sharpless, the acting F.D.A. commissioner and the president. “She’s got a son,” Mr. Trump said of their teenage child, Barron. “She feels very strongly about it,” he said.

Juul has repeatedly denied that it aimed its products at minors, but its sleek devices have become more and more popular and are easy to conceal. And even though the company’s array of flavors had disappeared from shelves, they were still available online, and a host of competitors sprouted up with lookalike versions and similar flavors to fill the vacuum. Juul had said that nearly 85 percent of its sales were from mint and other flavors, and that its decision to stop shipping them to stores had dented their sales.

On Monday, the F.D.A. took action against Juul, sending a warning letter accusing the company of violating federal regulations by promoting its vaping products as a healthier option than cigarettes.

As for the agency’s decision to prohibit most flavors, Ted Kwong, a Juul spokesman, said the company would comply. “We strongly agree with the need for aggressive category-wide action on flavored products,” he said.

Public health groups have long clamored for strict curbs on e-cigarettes and flavors, especially because they worried that the soaring use among youths was hooking a new generation on nicotine after decades of a decline in smoking rates.

“President Trump’s announcement that the government will remove flavored e-cigarettes from the market is an extraordinary and necessary step,” he said. “This is a public health crisis and we cannot afford more delays in confronting it.”

Harold Wimmer, president and chief executive of the American Lung Association, said the group had long advocated removal of products that appealed to teenagers.

“Flavors have been shown to initiate kids to tobacco use and a lifetime of addiction and tobacco-related death and disease,” Mr. Wimmer said. “We are anxious to review all of the details of the administration’s plan.”

Conservative organizations and the vaping industry had earlier joined forces to oppose other F.D.A. proposals, including one that sought to require retailers to curb access to vaping devices, pods and other paraphernalia to keep them away from minors. Since last fall, the agency has been working on a plan to require stores to sequester flavored e-cigarettes in areas off-limits to minors, but that had seemed to falter as impractical and one that would face significant legal hurdles. This new announcement supersedes that proposal.

Since Dr. Scott Gottlieb resigned as F.D.A. commissioner in April, the agency had seemed more sluggish in its efforts to control the epidemic of youth vaping. Although Dr. Sharpless had said he planned to continue the agency’s work to reduce both cigarette and e-cigarette use, not much moved forward. Dr. Gottlieb’s proposal to ban menthol in cigarettes, for example, has languished, as has his call for reducing nicotine in cigarettes to nonaddictive levels.

But as school began around the country and the spate of illnesses sparked fear nationwide, calls for the F.D.A. to take stronger action intensified.

Senator Dick Durbin, Democrat of Illinois and a longtime opponent of tobacco and e-cigarettes, went so far last week as to warn that he would seek Dr. Sharpless’s resignation if the agency failed to rid the market of e-cigarette flavors.

Michael R. Bloomberg, the former mayor of New York, also decided to weigh in this week by announcing a $160 million push to ban flavored e-cigarettes.

In a statement on Tuesday, the Vapor Technology Association, a trade group, said it opposed a flavor ban and essentially called the efforts misguided.

But there is little conclusive research on the long-term safety of using Juul or other e-cigarettes. The company’s flavor pods have a higher level of nicotine than cigarettes do, which is of concern because of the impact nicotine can have on the still-developing teenage brain.

Doctors have said that many patients suffering from acute lung illnesses appear to have vaped some THC or cannabis-related products, although others have reported using e-cigarettes as well. No one has singled out a particular company, device or product as the possible culprit.

Deaths have been reported in Illinois, Kansas, California, Indiana, Minnesota and Oregon. The patients’ ages ranged from the 30s to middle-aged or older, and some had underlying lung or other chronic conditions, health officials said.

And while major e-cigarette companies like Juul and vaping groups have sought to distance themselves from the increasing public dismay at the reports of increasing vaping-related illnesses, some public health agencies are urging a halt to use of the devices and products.

The Centers for Disease Control and Prevention have urged people, especially nonsmokers and teenagers, not to vape at all. And the C.D.C. has even recommended that cigarette smokers trying to quit should consult a doctor rather than take up e-cigarettes.

One House oversight panel has asked Dr. Robert Redfield, the director of the C.D.C., to appear on Sept. 24 to testify about the outbreak of vaping-related lung illnesses. Another investigative subcommittee is planning a separate hearing on the matter the next day.

In New York, Governor Cuomo also directed state health officials to subpoena companies that market or sell so-called thickening agents, which are sometimes added to illicit vaping products. A state laboratory, which detected the agents in vaping products collected from New York’s patients, found that they were nearly pure vitamin E acetate oil, which officials have said is a potential cause of some of the illnesses.