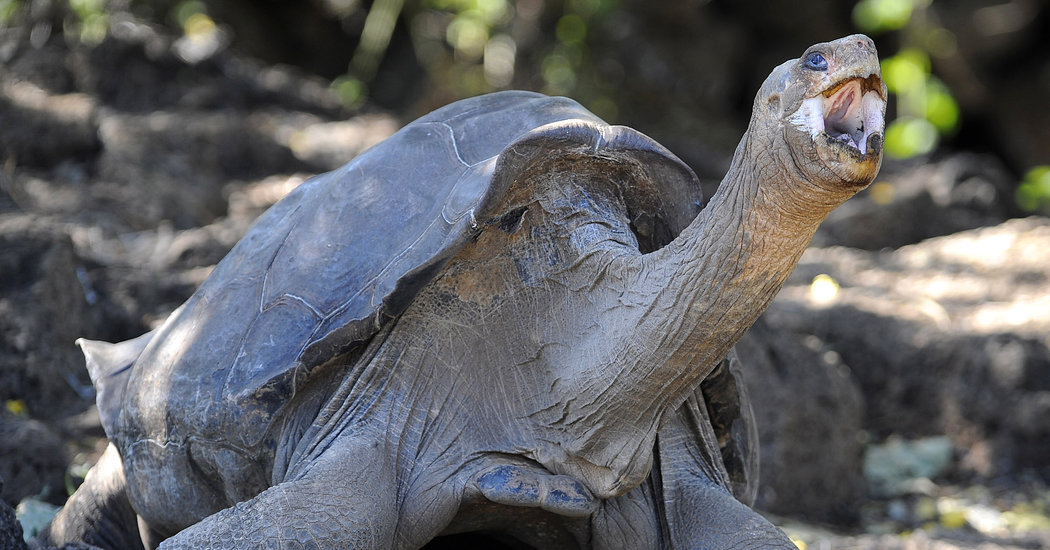 When Lonesome George, the only survivor of the Pinta Island tortoises of the Galápagos, died in 2012, the news landed with a blow.

Rationally, people had time to prepare for the reality that George would one day fade away, and with him, an entire lineage. He had lived for a century or more, a common life expectancy for giant tortoises, and all attempts to mate him during his last few decades were unsuccessful.

But emotionally, it’s hard to brace oneself for the realization that something that was once there is finally, completely gone. It’s the kind of stuff that makes you ponder life, our fleeting stint in the universe and the unrelenting, forward march of time.

Similar feelings drive longevity research. Recently, a team of scientists turned to George for help in this search, mining his genetic code for clues to his long life span.

In a paper published Monday in Nature Ecology & Evolution, the researchers reported preliminary findings of gene variants in George linked with a robust immune system, efficient DNA repair and resistance to cancer. The study also sets the stage for understanding giant tortoises’ evolutionary past, which might help to conserve them in the future.

Giant tortoises helped launch the theory of evolution. When Charles Darwin visited the Galápagos, he noticed the tortoises’ shell shapes were unique adaptations to their environments. He hypothesized that natural selection was at work.

The Galápagos tortoises have since continued to be a rich source of inquiry for evolutionary scientists. Adalgisa “Gisella” Caccone, a researcher at Yale University, has spent decades studying the reptiles that are the size of upright pianos.

But years ago, Dr. Caccone hit a wall — she needed someone to help her decipher which parts of the tortoises’ DNA were functional genes, which regions were not and what the genes’ functions might be.

She received a fateful message from Carlos López-Otín, a professor at the University of Oviedo in Spain who has built a career studying cancer and aging in humans. Dr. López-Otín was interested in unlocking the genetic secrets behind giant tortoises’ legendary longevity.

Dr. Caccone loved the idea of “a conservation icon providing insights” into human health and longevity. The scientists sequenced the entire genome of Lonesome George, plus that of an Aldabra giant tortoise from the Seychelles, another extraordinarily long-lived species (one was rumored to have lived up to 250 years in captivity).

The researchers then compared the tortoise genomes with those of mammals, fish, birds and other reptiles, looking for discrepancies that could affect aging. The scientists found evidence that a mutation in a gene called IGF1R, which has been linked with longevity in humans and mice, might contribute to the tortoises’ exceptional life span.

They also discovered that the tortoises had more copies of genes related to energy regulation, DNA repair, tumor suppression and immune defense compared with other creatures. While most mammals have only one copy of a gene involved in immune response called PRF1, for instance, both tortoises had a whopping 12 copies in their genome.

Generally, having many copies of genes can allow existing functions to occur more efficiently, or provide fuel for the evolution of new functions.

The research opens the door to learning more about tortoise biology, too. Dr. Caccone plans to dive deep into the genomes to piece together how giant tortoises evolved traits like gigantism and carapace shape. Genomic data will also aid her efforts to revive two extinct species of Galápagos tortoise.

Future avenues of research will only expand as scientists sequence the genomes of more reptiles, said Kenro Kusumi, a professor of life sciences at Arizona State University.

There are many lessons to learn from reptiles. They are the closest relatives of humans that can regenerate entire body parts, a trait that could inform medical treatments.

And many reptiles, including tortoises, can enter an inactive state that allows them to survive extreme conditions. The ability to induce similar states in humans could be useful for future space travel, Dr. Kusumi said.

“The beauty of having these genomes is that it’s a great starting point to ask questions,” he added. “Even after death, Lonesome George is teaching us things — just like his ancestors taught Charles Darwin.”

Preserving a Tortoise, and a Legacy

Scientists Hope to Bring a Galápagos Tortoise Species Back to Life

Meet Diego, the Centenarian Whose Sex Drive Saved His Species

FacebookshareGoogle+sharePinterestpin it
Medical News Today: Is it possible to reverse ‘chemo brain?’Bites: In London, a Simple Approach and a Complex Finish
Latest