Ties: I Dreaded Winter Until My Newborn Taught Me to Embrace It 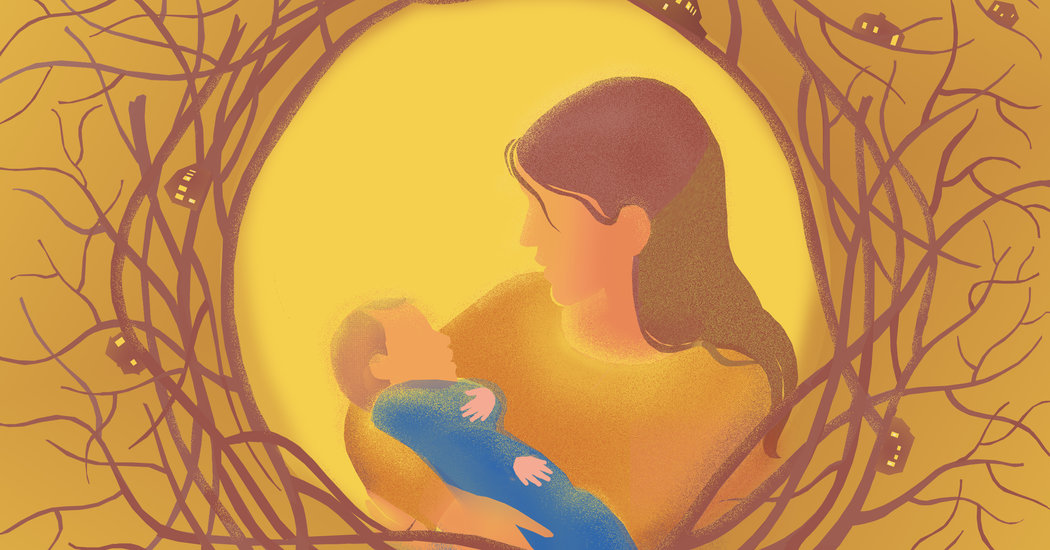 For most of my adult life, I dreaded — absolutely dreaded — winter. In that season, my own darkness multiplied and surged forth like cockroaches waiting for the lights to go out. Whatever deep-seated fears — illnesses, accidents, loved ones dying — I’d managed to keep at bay in the brighter months emerged hungry and atomic-blast-proof with the 5 p.m. twilight.

The winter my husband and I decided to try for a baby, the cockroaches took over completely. They nestled in my hair while I Googled all the diseases a future child might have, all the recessive-but-fatal genetic flaws my husband and I could carry. They rested on my shoulder blades as I worked out the mathematical stats on C-section deaths, umbilical cord disasters, placental abruptions. They urged me to click on every story about a seemingly healthy child suddenly stricken with a rare deadly syndrome. In the checkout line, at the gas pump, in the shower, they hissed: car wrecks, cancers, the uselessness of odds. Someone, they whispered, has to be that one in 20,000.

With spring, though, the days lengthened, the air softened, and the cockroaches went semi-dormant again, lulled to sluggishness by heat and light and some good cognitive-behavioral therapy. It was early April when I found out I was pregnant, a warm, bright day, and I was glad when I saw the two pink lines signaling yes. And though I had fears, sometimes big ones, my doctor was skilled and kind and willing to answer questions, and it was spring, and then summer, and then the warm Mississippi fall, and my pregnancy was full of sun, strolls under green leaves, windows thrown open to air the house after we painted the nursery its two-toned blue.

But my son was due in mid-December, a few days before the longest night of the year. I knew the warmth wouldn’t hold. And everyone — everyone — had told me the up-all-night horror stories. Those stories haunted me. Not because I feared the sleep deprivation, but because I dreaded a wintertime darkness with even more muscle than the ones I’d fought through for years.

Sometimes, seven or eight months pregnant, I would wake in the night to use the bathroom and would peer through the slats in the blinds to the black sky outside, the stars sharp and cold through the trees. When the baby was born, those trees would be bare. When the baby was born, that blackness would be colder. I felt a terrible anticipatory loneliness in those moments. I knew what it was like to be isolated in my own head.

What would it be like in winter, awake in that dark silent house, holding a baby I couldn’t even imagine? I’d always thought of the deepest part of night as the witching hour, a time, my childhood books had taught me, that was not for humans. In a month or so, I’d see the witching hour again and again. And the cockroaches would know my human self had no place there.

Then my son was born, and what shocked me most — more than the surprising goriness of my body’s healing, more than the strange sounds newborns make, more than the ferocity of my nursing-mother appetite — were the nights. Those long, dark, cold winter nights I had feared more than childbirth itself. They became something I hadn’t known a night could be: a haven. A shelter.

When our son finally fell asleep, my husband and I would go to bed ourselves, the silence of our house suddenly sacred, fragile as blown glass. And when, after an hour or two, our son would wake again and cry, I’d hold him in his soft rocking chair, nurse him there in the nightlight’s glow. Sometimes I’d surf the internet on my phone, feeling a companionable affection for anyone posting on Facebook at 3 a.m.; sometimes I’d just sit there, half in dreams. My son would fall asleep, and I’d know I should try to get some more sleep myself, but often I’d hold him a little longer, the heavy sleeping weight of him, the warmth of him in his soft flannel zippered pajamas against the chill of the January night. The silence a globe around us.

I stopped minding when the sun dropped below the trees at 5 p.m. I was exhausted by then, and it felt right that the day should be ending. And when the full dark came and wrapped itself around our house, it felt like a cave, safe and ancient. I felt my animal self stir and settle. The night let me burrow deep in my new life. The night unthreaded me from human time, human brain.

There was a baby, and there was my body, and there was food and shelter and the warmth of the other bodies in this shelter. There were cockroaches sometimes, too, but I couldn’t be bothered with them, not for long. I was a bear, a bobcat, a wolf. I was large and furred. I was going on instinct. When something crawled across me, I let it, then got back to tending. I was busy with the work of winter.

My anxiety didn’t disappear, of course. There was an abundance of it (suffocation, choking, a new set of worries — torticollis, R.S.V., infant botulism — in which I quickly became expert), and there still is. I lose hours to it sometimes, disappear down the rabbit hole as I always have.

But since my son’s birth, nearly a decade ago now, I haven’t once dreaded the end of Daylight Saving Time, that autumn date that confiscates 60 minutes of gold-light evening. Now when I see it approaching on the calendar, I feel a little ping of glad anticipation. These days, winter means an excuse to stay in. It means a harking back to those early weeks. It means — unbelievably — comfort. Winter is dark, but now it’s a darkness I want to climb inside.

One evening that first February of my son’s life, it snowed, unusual for Mississippi. At 1 a.m. I held my son in his rocker. Outside, the moonlight and streetlights on the snow turned the sky a glowy gray orange. The neighborhood was silent, blanketed in its unexpected whiteness. It was the witching hour again. And I’d been right: It was not a time for humans. It was a time for my son and me, two animals warm against the cold world outside. And it was a time for that world, too deep in the work of winter to pay us any mind.

Catherine Pierce is co-director of the creative writing program at Mississippi State University and the author of three books of poetry, most recently “The Tornado Is the World.”