The Races Are Virtual but the Running Is Real 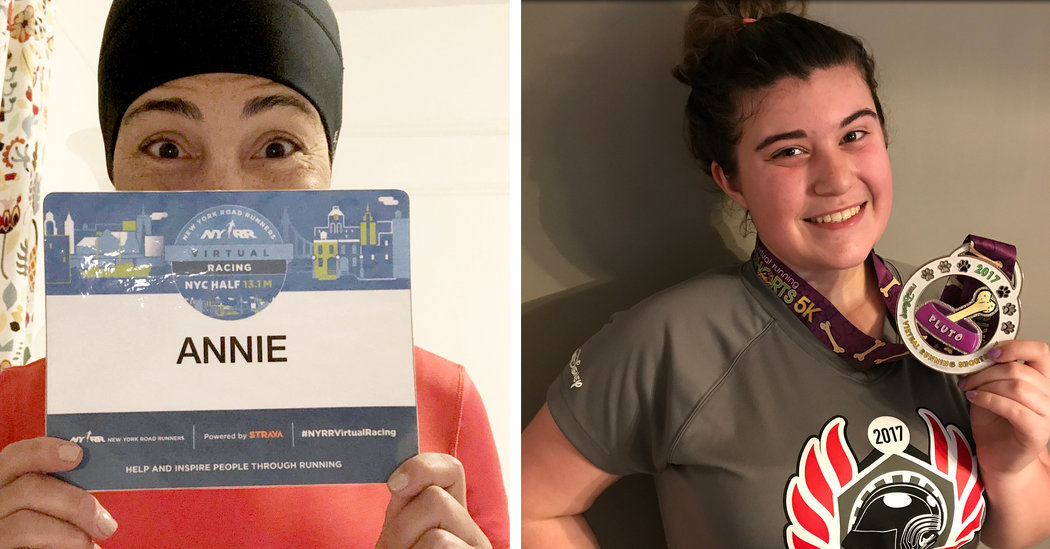 On a recent Sunday morning, Kate Silvester ran a 5K. She didn’t have to worry about where to park to get to the starting line in time: She just headed out to a biking and running path behind her house and onto a back road.

Her race was a virtual 5K associated with the NYC Half, which was run in New York the same day.

Virtual challenges and runs are part of a growing trend in recreational running: doing a race whenever you can, wherever you can, and still feeling as if you’re part of the crowd, even if you’re running alone.

Bob Bickel, founder of the race registration platform Run Sign Up, said the organization saw virtual races pop up “in earnest” about five years ago. One of the first popular virtual runs, he said, was that of Jeff Galloway, a running coach who trains runners using a run-walk-run method. In 2018, 1,050 people finished Mr. Galloway’s virtual events, which included a 5K and half marathon.

“People are used to running with their apps, and I think more and more people are comfortable with connecting virtually,” Mr. Bickel said, “whether it’s on Facebook or Instagram or Snapchat, people can actually have friendships even though they don’t see each other.”

Ms. Silvester, 44, of Plainsboro, N.J., said her first virtual run came through the tracking app Run Keeper. In 2017, she was new to the sport, and she’d been using the app to track her progress. She saw that she could participate in a “challenge” event, where runners who donated $35 to Beat Nb, a nonprofit that funds research for the childhood cancer neuroblastoma, got a T-shirt for completing the run.

She’d done traditional races before, but as a single mother of two who works full time, she liked the flexibility of something virtual.

Disney’s Virtual Run 5K series started in 2016 and uses the honor system. Runners can download bibs to wear to do the virtual runs. When they finish one — or all — of the three 5Ks in the series, they can download a finisher’s bib and are mailed a medal.

“It was an interesting opportunity for us to really keep people involved with runDisney year round,” said Faron Kelley, vice president of Disney Sports. Most on-site runDisney events are held in cooler months, so the Virtual Run 5K series is held in the summer. Last year’s series, which was themed to “The Incredibles,” had about 18,000 participants. This year’s series, with registration opening on May 7, is Marvel themed, with each 5K costing $40; doing all three, which includes a fourth medal for completing them all, costs $145. RunDisney also puts on a virtual Star Wars Half Marathon in the winter and early spring — for 2019, it costs $59 (and is open through March 31).

The Great Pumpkin Run virtual race series also uses the honor system. For $35, runners are mailed a race hoodie and a bib. Previously, the race sent race medals after runners submitted their times, but this year, Courtney Young, co-founder of the race, said medals will be mailed along with the hoodie and bib. “People want that instant gratification,” she said. Ms. Young said the race has also worked with Strava, an exercise tracking app, but it’s not a requirement; they trust that runners aren’t lying.

The Great Pumpkin Run started as a traditional race series in 2012, but the virtual option has taken off since it was introduced in 2016. The first year, 300 runners did the virtual option; last year there were close to 14,000. “I think it’s helping people get into the sport,” Ms. Young said. It appeals to runners who may not be able to show up to a race on a certain time and day, or who are intimidated by running with other people in their first race.

The New York Road Runners added virtual runs to its race roster in 2018, and this year it has 12, most themed to a holiday or event, like the Resolution Run 5K or the Valentine’s Duo 5K. It also had a virtual half marathon and 5K connected to last weekend’s NYC Half, the one Ms. Silvester ran.

The New York Road Runners’ virtual races are free, unless runners are using them as a way to get into a sellout race. In 2018, the organization opened 500 spots for runners to run a virtual marathon, which, if they completed it, would get them a race medal and guaranteed entry into the New York City Marathon this year (it cost $150, compared to $295 to run in the actual marathon; they also got a finisher medal but no finisher shirt). For guaranteed entry into the 2020 Brooklyn Half Marathon, runners can sign up for and complete six virtual races, costing between $20 and $120 per race. They also get access to a virtual trainer as part of their fee.

While runners can use whatever GPS watch or app they want to track their run, they must upload it into the Strava app in order for it to count.

The virtual runs started with the question of “how can we continue to engage and extend our impact across the global running community and provide ways in which people can run with us without being here in New York City?” said New York Road Runners president and chief executive Michael Capiraso.

For Ms. Silvester, Sunday’s virtual run was part of her recovery from an injury. “It was only my third run since getting back from injuring my hip flexor, so I took it pretty slow and included walk breaks, but I did it,” she said.

She’s hoping to do the Brooklyn Half next year, which would be her first half marathon. “It’s hard to picture myself getting to a half marathon in the next year or so, but it was good to get back into running after a long break,” she said.