The Defiance of Mariah’s Lambs 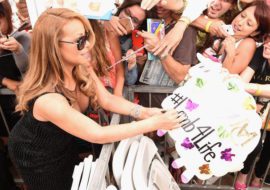 It’s that time of year again: The lights are strung, the pines are dying indoors under the weight of shiny balls, the Starbucks mint mocha is flowing, and Mariah Carey is on heavy rotation. No matter what is happening in her career — the tribulations, the tours, the headline-grabbing performance mishaps — Ms. Carey is wildly relevant for at least one of every 12 months, thanks to the enduring popularity of her holiday recordings, particularly “All I Want for Christmas Is You,” which will be celebrating its 25th anniversary in 2019.

There are, of course, plenty of die-hard fans for whom Ms. Carey is not merely an end-of-year highlight but a singer-songwriter for all seasons. This year, Ms. Carey debuted a new Las Vegas revue, and, to celebrate, a group of 36 “lambs,” mostly in their 30s and 40s, boarded a party bus and cruised the Vegas strip for about three hours. On it, they loudly sang selections from Ms. Carey’s catalog. Many were deep cuts. They call themselves “lambs” after the schticky term of endearment Ms. Carey used liberally in the early 2000s, including in voice messages she used to leave for her fans on her website. The flock on this particular evening was racially diverse and split fairly evenly by gender, united in difference by an unyielding interest in Ms. Carey, through all the states of her career. 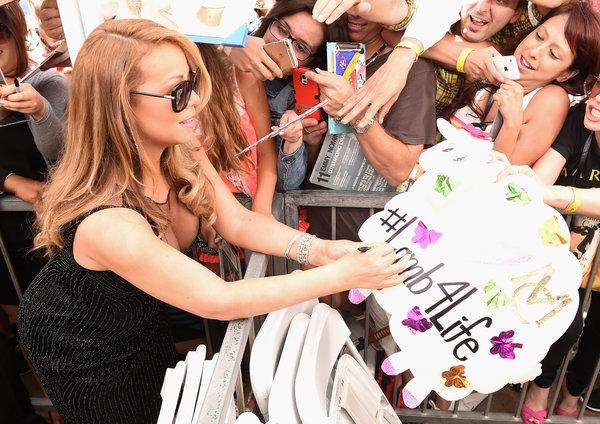 Ms. Carey among the lambs on the Hollywood Walk of Fame in 2015.CreditJeff Kravitz/FilmMagic, via Getty Images

The party was what’s known as a “Lambover Event,” a gathering of super fans first organized by Nick Fletcher, 34, and Sam Mirza, 37, after Ms. Carey’s 2014 Christmas shows at New York’s Beacon Theater. These events exist as a kind multi-city support group for enthusiasts of Ms. Carey, Mr. Fletcher said.

He called the gatherings “reparative.”

Claire Luke, a 30-year-old who has worked as a consultant for the World Bank, similarly described Ms. Carey’s work as “the business of saving lives.” Ms. Luke rewarded the diva’s work handsomely in return by purchasing multiple tickets close to the stage for three July performances of Ms. Carey’s residency, called “The Butterfly Returns” (it returns in February). Ms. Luke estimated that she has seen Ms. Carey 30 to 40 times in concert and has spent a cumulative $60,000 in tickets and merchandise. Fans like Ms. Luke routinely pay $1,000 for a brief encounter and photo opportunity with Ms. Carey after her concerts. It does add up.

Ms. Carey’s devoted followers take her artistry very seriously. Sometimes they demand others do, too — it was the fan-organized hashtag #JusticeForGlitter that, in November, briefly catapulted the soundtrack to the notorious 2001 flop “Glitter” to No. 1 on the iTunes Top Albums chart a mere 17 years late. A similar plan has circulated to propel Ms. Carey’s perennial earworm “All I Want for Christmas Is You” to No. 1 on the Billboard Hot 100 chart this year. (It would be her 19th song to reach the summit, and as of press time, it had hit No. 6.)

It’s easy to rhapsodize about Ms. Carey’s most recognizable musical trait, that honey-coated voice, capable of contours that previously did not seem humanly possible. But in conversations with more than a dozen self-identified lambs, it was her songwriting that was most consistently cited as her defining feature.

Few other divas of virtuosic voice and glamorous affect have been so involved in the writing of their own music — a point that Ms. Carey has made many times herself since releasing her self-titled debut in 1990. She has been credited for writing or co-writing every original song she has sung, which together represent an idiosyncratic contemporary R&B catalog unwavering its commitment to the singer’s proclivity for five-cent words (“unclouded,” “incandescent” and “nonchalant” among them). Her vast body of work covers virtually every thinkable micro-facet of love’s trajectory, from preliminary crushes to euphoric beginnings to sexual bliss to the despondency of finality. And then there is her consistent theme of the importance of prevailing — the songs about making it through the rain, of learning that a hero lies in you. The inspirational nature of her message positions her as a shepherd for her lambs.

“The artist is living the lyric,” said Mr. Fletcher, referencing the aspects of Ms. Carey’s biography — her biracial identity, fraught upbringing, high-profile couplings and splits, and unhappy marriage to Tommy Mottola, the boss of her first label, Columbia, whom she married in 1993 and separated from in 1997 — that are reflected in her work.

“She wrote ‘Make It Happen,’ and she makes it happen,” Mr. Fletcher said.

The lambs’ investment in the arc of Ms. Carey’s life and art echoes that of the fandoms surrounding her ’90s contemporaries who are regarded as “confessional” women singer-songwriters, like Tori Amos and Ani DiFranco. But because of the genre in which Ms. Carey works, and perhaps because she wields her divadom by mostly just standing onstage without an instrument in her hand, she is rarely grouped with them.

“In today’s world, it’s kind of cool to hate on Mariah Carey,” said Sam Alvarez, an 18-year-old student in the U.K. who has uploaded to YouTube more than 1,600 thematically organized clip compilations of Ms. Carey in concert and interviews since 2014. “I hope with my videos that a lot of people can be introduced to how much of a great artist she is.”

Not everyone thinks it’s cool to hate on Ms. Carey — her spare and subdued 15th full-length studio album, “Caution,” received some of the most ecstatic raves of her career upon its November release. But her newfound status as a critic’s darling hasn’t translated into record sales — “Caution” yielded no hits on the Billboard Hot 100. In the album’s third week on the Billboard 200, it was down to No. 163. At the same time, her 24-year-old holiday album, “Merry Christmas” was at No. 15.

The Dangers of Success

Often, it seems Ms. Carey’s flubs are more scrutinized in the press than her music. Two narratives about her have dominated coverage in recent years. One is that she’s losing her voice, or has lost it, or is hiding the loss of it. The other is that she’s a hot mess.

For instance, the opening night of “The Butterfly Returns” lasted for almost two hours and spanned 25 years of material. Over her live band, the singer’s voice fluttered like her butterfly mascot. She growled with a tenacity that would put her Jack Russell terrier to shame.

But only a few seconds of the show were reported in the press, and those were gaffes. One occurred when a box she was sitting on tipped over and she reached down to steady herself with the hand she was using to hold her microphone. The music continued uninterrupted, betraying Ms. Carey’s momentary lip-syncing. The other flub occurred when Ms. Carey’s 7-year-old son, Moroccan Scott Cannon, briefly thrust a plastic bag over his head during an onstage cameo.

Stories that seek to define Ms. Carey by her mistakes, not her gifts, harken back to those about her winded, strained live performance at the 2014 Rockefeller Center Christmas tree lighting (“Remember when Mariah Carey could sing? Most millennials probably can’t,” began Deadspin’s post, which netted almost 4 million clicks), or her sound issues-plagued nonperformance in Times Square on New Year’s Eve 2016, or her virtually inert choreography onstage to her hit “Honey” in 2017.

“She is a prisoner of her own success,” said Jordan Miller, the owner and operator of BreatheHeavy.com, a pop music website focused on contemporary divas. “At the end of the day, her singing a flawless rendition of one of her songs isn’t going to attract as much traffic as, ‘Oh, Mariah Carey dropped the mic and you got to check this video out.”

Giving Until It Hurts

While a mediocre night for Ms. Carey is better than at least what 99 percent of the world’s population can do at its best, the singer’s vocals have undeniably changed in recent years. Witnessing her miss notes can feel like watching the road give out from Wile E. Coyote as he chases the Roadrunner off a cliff.

Ms. Carey has discussed her voice issues in the press, but rarely. (Her representatives declined several interview requests from the Times.) She has largely attributed whatever difficulties she has performing to growths on her vocal folds (she has said she’s had them all her life), in addition to the amount of rest she gets.

“Deterioration is going to happen to all singers, particularly those who have a great deal of athleticism that they’re doing with their voices,” said Justin Stoney, the founder and president of the school New York Vocal Coaching. “What it appears to be is she is trying to still sing as though she were 23 years old.”

Ms. Carey in Glasgow in 2016.CreditRoss Gilmore/Redferns, via Getty Images

Ms. Carey does not acknowledge her birthday, referring to it instead as her “anniversary.” Her exact age, per Wikipedia, is unknown because “sources differ” — she is either 48 or 49.

“Every female singer goes through some changes hormonally in their voice that requires some attention in terms of learning how to adapt to it,” said Melissa Cross, a vocal coach in New York who is perhaps best known for the instructional DVD “The Zen of Screaming.” “The high notes don’t disappear, but they become thicker. You get more meat and less sauce.”

“I think her talent is still 100 percent,” said Ms. Cross, who added that she thought other vocal coaches’ negative assessments in the press of Ms. Carey’s ability have been “absolutely shameful.”

Her birthday is but one subject the generally tight-lipped Ms. Carey doesn’t tend to discuss in public. That made her revelation in People magazine earlier this year all the more surprising: She said she had been diagnosed with bipolar disorder in 2001, the same year she had been hospitalized for what was either a breakdown or extreme exhaustion a few weeks before the release of “Glitter.”

Ms. Carey told People that “for a long time” she had been “working and working and working” as a result of what she thought was severe insomnia. “It turns out that I was experiencing a form of mania,” she said.

Ms. Carey also said she had just experienced the “hardest couple of years” she’d gone through. She has weathered a broken-off engagement to the billionaire James Packer, a little-watched, widely mocked reality show on E!, and the end of a close relationship with her manager, Stella Bulochnikov. After working together for nearly three years, Ms. Carey fired Ms. Bulochnikov in the fall of 2017. Ms. Bulochnikov, in turn, filed a lawsuit in April 2018 that listed sexual harassment among its allegations.

Many stars would have spent a year in retreat after that. Instead, she is set to return to her Vegas residency in February, and will, as well, embark on a national tour to support “Caution.”

Working for almost 30 years in the industry seems to have had little impact on her drive and work ethic. Ms. Carey has long played the unlikely champion. She is a complete and utter success, and yet an eternal underdog — even when she’s onstage. In 2018, she epitomizes what it is to be one’s own greatest competition. “All I Want for Christmas Is You,” then, is the perfect solution for this dilemma. It is past glory whose time has yet to pass, an endlessly returning reminder of her greatness — truly a gift that keeps on giving.

FacebookshareGoogle+sharePinterestpin it
Mini-Vows: Three Dates in Three Years, Then They ClickedMedical News Today: Why do we love coffee when it is so bitter?
Latest