The 52 Places Traveler: Adventures in ‘the Most Organized City’ in India 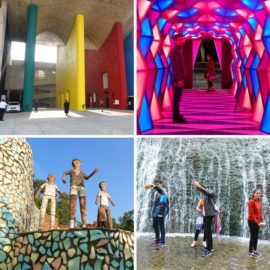 Our columnist, Jada Yuan, is visiting each destination on our 52 Places to Go in 2018 list. This dispatch brings her to the Chandigarh, India (no. 43 on the list); it is the 49th stop on Jada’s itinerary. 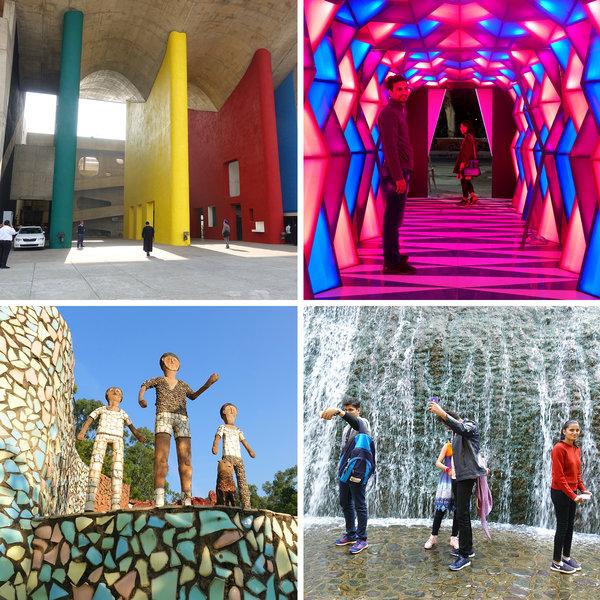 A tiny figure in flowing blue fabric ran in front of me, giggling, then another, then another, then perhaps a hundred more. They filed through what looked like a handcrafted version of a canyon from the moon: a narrow passageway of pockmarked concrete embedded with rocks, stretching two stories into the air.

There they were again, taking selfies next to a man-made waterfall tumbling from some kind of shrine on a hill.

And then, quick as panthers, they were behind me, waving from a bridge festooned with clay vines: “Hello! Hello! Where are you from?”

When I had arrived by rickshaw at Nek Chand’s Rock Garden in Chandigarh, India, I had been prepared to gorge on a 40-acre extravaganza of outsider art. I had not anticipated, though, the sheer joy that would come from sharing that playground with uniformed schoolgirls from the nearby Muslim-majority city of Malerkotla.

And they weren’t even close to the only school group I’d see that day — the place was awash with children and teenagers, leapfrogging over one another, having the time of their lives. Boys in black sweaters with white jeans and white sneakers streamed past my Malerkotla friends, who were streaming past young Sikhs in green turbans, who were streaming past little girls in plaid skirts with pigtail braids.

Most of them were coming from rural areas. Chandigarh, the dual-capital city of the states of Punjab and Haryana, was one of the biggest cities they’d ever seen. And judging from how many of them wanted to “snap a selfie” with me, I was likely one of the only foreigners they’d ever seen, too. Add to the mix families, honeymooning women in elaborate pink saris, the occasional stray dog, and workers asleep on walls. It was such a life-affirming scene that I couldn’t stop grinning.

I’d had my doubts when I’d heard that a rock garden was one of Chandigarh’s — and India’s — biggest calling cards, but then I stepped inside this one and was floored. Think Antoni Gaudí’s similarly sized Park Güell in Barcelona, but homespun, distinctly Indian, and made entirely of industrial waste and found rocks, by the self-taught artist Nek Chand Saini. I thought I’d reached the end at one point, and instead walked into a huge, open expanse filled with mosaic benches, a fun house of mirrors, and pillars hung with swings. Every turn of a corner brought new mosaics, waterfalls and sculptures of imaginary animals.

Being there took me right back to Baltimore, one of my other 52 Places stops, and the celebration of outsider art that is the American Visionary Art Museum.

“Someone please tell me John Waters has been here,” I whispered, while looking at a three-headed ghost made of pebbles.

That so much space has been given over to the organic expression of one artist’s vision in Chandigarh, of all places, seems wild. This is independent India’s first planned city, designed by the Swiss-French architect, Charles-Édouard Jeanneret, known as Le Corbusier. Here you’ll find monumental, concrete, Brutalist buildings amid one of the only urban-grid layouts in the country. Le Corbusier divided the city into numbered sectors that are meant to be self-sufficient neighborhoods, each with its own health center, schools, shops and green space. In between them run wide boulevards lined with trees.

“It’s the best city in India,” said Suri Kumar, an Air Force officer I’d met on the subway in New Delhi. “The cleanest, the most organized, the best.”

Chandigarh exists only because of the painful Partition that created Pakistan, following independence from British rule in 1947. Punjab was one of the states that was cleaved in two, with its prosperous western side, including the capital city of Lahore, given to the Muslim homeland. Indian Punjab needed a new capital, not just to govern the state, but also to house nearly a million Hindu and Sikh refugees.

As I learned from talking with Rajnish Wattas, the former principal of the Chandigarh College of Architecture, Prime Minister Jawaharlal Nehru was determined to make a new capital city that would be the pride of modern India, with no references to a past of palaces and fortresses. The planning had begun with the American architect Albert Mayer and his partner, Matthew Nowicki, but halted when Nowicki died in a plane crash. Nehru’s selection committee then convinced Le Corbusier to come onboard, using some of the first team’s sketches of the city layout.

Le Corbusier, it turned out, had long dreamed of building a new city. He’d even come up with a plan for modernizing Paris with vertical towers that never came to fruition. (Thank goodness.) “If Chandigarh was lucky to get Corbusier,” said Mr. Wattas, “then Corbusier, too, was very lucky to get Chandigarh, because this was his biggest realization.”

The jewel of that realization is the Capitol Complex, which just received Unesco World Heritage recognition, along with 16 other Le Corbusier structures, as “an Outstanding Contribution to the Modern Movement.”

After registering for one of three free daily tours, I stood on a vast concrete plaza. On one end was the High Court, where lawyers in black cloaks with white neckbands paced beneath huge pillars painted in bright yellow, green and red. On the other end was the Legislative Assembly, where the governing bodies for Punjab and Haryana meet twice a year and the interior is decorated with cloud-shaped panels that contain cotton for sound absorption. In the middle was the city’s symbol, seen on signs everywhere: an open hand made of iron and mounted on a pole that moves with the direction of the wind. It’s meant to be a symbol of nonviolence and peace.

“According to Corbusier,” said our guide, “an open hand cannot hold a weapon.”

More on travel to India
36 Hours in Jaipur 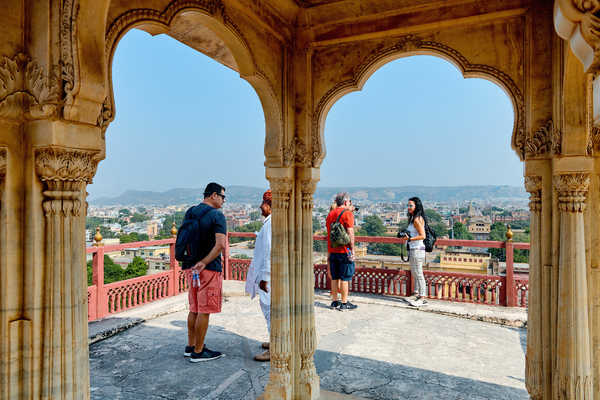 In Kolkata, a Love of Literature, Fried Street Food and, Mostly, Sweets 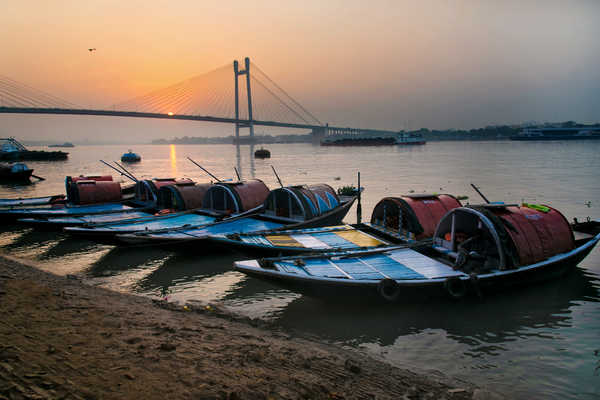 All that planning, though, couldn’t quite account for people moving in. Walking along those wide boulevards with my friend Lisa Philp — an architecture and history buff who happened to have planned a trip to Chandigarh the weekend I was there — we rarely found a sidewalk. But we did see roadside barbershops and portable Hindu temples and playgrounds with trash cans in the shape of strawberries. While in a nature preserve next to the vast, man-made Sukhna Lake we came upon two monkeys vigorously mating. In a roundabout thick with traffic, I once looked out the window of my Uber and saw a horse cart go by.

After hearing about Chandigarh’s organization from Mr. Kumar, I’d been surprised to arrive at the train station, on the superfast Shatabdi Express, and see the same scene I’d left behind three and a half hours earlier in New Delhi. Dozens of people were asleep in the station lobby, waiting for their trains; I had to hoist my bags over them and step gingerly to reach the door. Rather than using the stairs, families would jump down into the tracks to cross from platform to platform.

Chandigarh, after all, was once countryside. Some 58 villages stood where the city now does, and only 16 are still intact. Along with the slums that formed later, they make up an impoverished periphery to a city whose per capita income, car ownership (three to four per household) and real estate prices are among the highest in the country. Now the city’s population is over double the half million it was built to hold. “No one ever thought to prepare for rickshaws and pavement hawkers, the fringe people,” said Mr. Wattas.

The pollution was at an “unhealthy” to “very unhealthy” level, according to Lisa’s weather app, the entire time we were there, and Lisa was a little spooked by the stray dogs. But we had a great time going to bars and massive nightclubs in Sector 26, and eating many great dinners and lunches (among them, Gopal Sweets, The Great Bear Kitchen & Brewery and Pal Dhaba, at a plastic table in a strip mall parking lot) for so little we both struggled to get rid of the $100 in rupees we’d gotten at an A.T.M.

Following Lisa’s lead, I walked through the city whenever I could, to see what perfection looks like when life happens to it.

The man behind the garden

The rock garden, too, wouldn’t exist without the Partition. Nek Chand’s family was living on the side of the divide that became Pakistan in 1947. They fled to New Delhi for safety, then Chand moved to the still-under-construction Chandigarh. During the building of the city, some 40 villages were razed. Chand became a road inspector for the public works department; afterward, he collected debris from those villages that had been destroyed, and carried it on his bike to a secret spot in the forest outside the city.

Chand’s debris haven was in a Corbusier-designated urban wilderness near the Capitol Complex where building was illegal, and for 18 years he’d go there at night to craft sculptures out of discarded electrical sockets, broken tiles and the like, along with rocks he collected from the river.

“He wanted to depict the stories about gods and goddesses, kings and fairies,” said Mr. Wattas. “And it grew, but it was in a forest area and he was afraid that there would be an official reprimand.” But he couldn’t stop. His secret project ballooned to 12 acres of courtyards and twisting passages. The 2,500 sculptures he made, Mr. Wattas said, look like the kind of tribal figures you’d find in village homes. Having lost his own village, Chand wanted to create a magical, indestructible one out of the wreckage of other villages. All of the doorways are designed so you have to bend down, in a gesture of respect, as you do while entering a temple.

When the authorities did find the site in 1975, it ignited a huge debate between city officials who wanted to tear it down, and those who thought it ought to be preserved. People began making treks into the forest to see this act of passionate art. Eventually the government not only relented in preserving the site, but also gave Chand an official title, a salary so he could continue his artistic work full time, and a crew of 50 to help him expand it.

I went to the Rock Garden twice, for multiple hours, to soak in the spirit of Nek Chand’s creativity. It is an oasis of spontaneity and deliberate chaos in the midst of a city built on laws and structure. And even then, I felt like I’d barely scratched the surface, that I would have to return.

Good thing two of the people who’d asked me for selfies also invited me to their weddings next year.

22 and 23: Bristol, England, and Glasgow, Scotland

24 and 25: Tallinn, Estonia, and Vilnius, Lithuania

37 and 38: Emilia-Romagna and Basilicata

FacebookshareGoogle+sharePinterestpin it
6 Food Safety Tips Every Restaurateur Should KnowCan We Ever Be Truly Fearless?
Latest