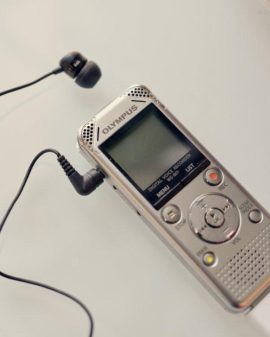 How do New York Times journalists use technology in their jobs and in their personal lives? Taffy Brodesser-Akner, a staff writer for The New York Times Magazine who occasionally writes for Arts, discussed the tech she’s using.

You’re known for writing profiles of people like Tonya Harding and Bradley Cooper. What tools do you use to make sure people forget they’re in an interview and that they open up?

I have a small Olympus WS-801 recorder, but I don’t think they ever forget about it because I don’t. I’m constantly checking to make sure it’s really running and the volume is really up. But it’s not, like, equipment. I’m not wearing headphones or using a microphone. I never ever ever ask anyone to speak directly into the recorder, unless there are very extenuating circumstances. Hasn’t happened in a while.

Some of the people you write about have chaotic schedules, and they probably surprise you with unexpected interview times. What do you do, and what tech equipment do you need to have at the ready for these sudden interviews?

I have been at basketball games with my kids and dentist appointments (my own!) when suddenly a secondary interview — the only kind I’ll do on the phone, though I’ve spoken with primary subjects on the phone after our meetings for follow-up — comes in. I always have my Olympus on me. I have one on my desk at work and one in my bag at all times.

I also use this incredible, simple contraption called the Olympus TP-8 Telephone Pick-up Microphone (no, I am not sponsored by Olympus, but, hey, Olympus, if you’re reading this, give me a call), which hooks up to my tape recorder, goes into my ear, and therefore picks up both my end and the other end. 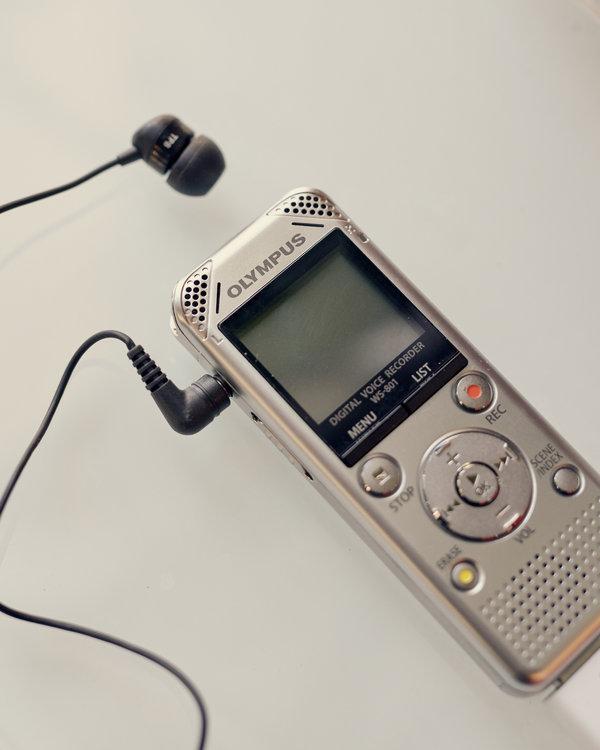 It’s like $21, and whoever thought of it should win a Nobel. I have a transcriber, a very nice woman, who gets upset at me if I do interviews while we eat or if the sound quality is terrible, and during those moments, it is her I am serving more than anyone else. I see people using iPhones or TapeACall, and those things are so unreliable-seeming and tenuous I can’t bear it. It would absolutely affect the interviews if I were worried on that level about sound and the thing working.

How do you use social media tools to communicate with celebrities and other people whom you profile?

I never communicate over social with people I’m writing about. I give them my card at the end of our first meeting and put my cell onto it, and if they have something they forgot to tell me or are worried about, they can contact me.

It has led to a lot of further interactions that have really made the story. Also, it’s helpful to ask Bradley Cooper over text what kind of hat he was wearing rather than go through other people, particularly during film promotion time. I’m not so organized all the time, and sometimes I don’t think to ask pertinent questions until I read the transcript or realize I want to describe something I saw that I didn’t ask about in the room.

When people you write about share a story or not share what you’ve written on social media, what do you generally consider that to mean?

God, that’s a hard one. I think it’s really hard to be written about. You’re essentially vulnerable to a stranger. I feel very bad for everyone I write about. I tell them before publication: “You can read this if you want, but it’s not really for you. It’s about you, but it’s not for you.”

When someone asks if it’s a good or a bad story, I always say, “It’s not good or bad, it’s a third thing.” Some people want to stay in touch. Some people never want to see me again. There are very few people who have hated their story.

But that’s not the same as the person being comfortable with it. If I do a good job and tell the intimate story that I, as a reader, want to read, then probably that person I wrote about never wants to be in a room with me again.

This is a long way of saying: I don’t take it personally. I don’t even notice most of the time when it happens, because I unfollow people pretty quickly because the experience was also very intense for me, and it’s sad to me that I have these short-lived intensive relationships and then they’re over. Like, when “Shakespeare in Love” used to come on HBO, I’d watch it. Now I have a hard time watching it. When I see Gwyneth, I have every emotion I had when I was reporting and writing and closing and publishing that story, which is the opposite of escapism.

Do you use social media less or more over time and why?

I really like it and sometimes I hate it, but I can’t really chart it. Instagram is boring mostly. Facebook is boring, but I like seeing my friends and their kids and their dogs and stuff. I met one of my best friends on Twitter, Reyhan. Twitter! You can meet a best friend and get an alt-right trolling on the same day! Who could have predicted this?

I do know that if people love your story and there’s a real thunder on social media, there’s a twinge because you know if you like it too much, you’ll have to one day experience its inverse, which is the incredible internet dragging that awaits each and every one of us. I don’t think I really answered this question.

FacebookshareGoogle+sharePinterestpin it
Me Time: So I Thought I Couldn’t Dance21 Classic Sunglasses for Every Face Shape
Latest