Set It and Forget It. How Better Contraception Could Be a Secret to Reducing Poverty 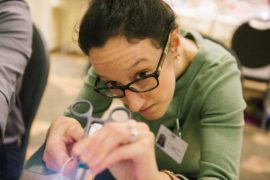 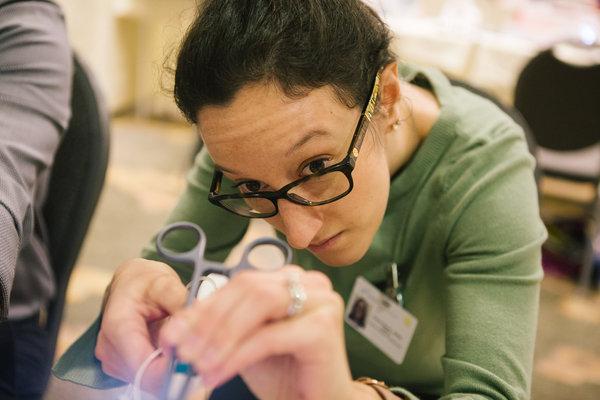 Andrea Boyle, a family nurse practitioner, practiced inserting an IUD into an artificial uterus during a training session for Upstream in Delaware.CreditMichelle Gustafson for The New York Times

When a woman of childbearing age goes to the doctor in most places, she gets standard queries about her smoking, drinking, seatbelt use and allergies. In Delaware, she is now also asked: “Do you want to get pregnant in the next year?”

If her answer is no, clinics are being trained to ensure she gets whatever form of birth control she wants that very day, whether a prescription or an implant in her arm.

This simple question — so new that electronic medical record systems had to be modified to record the answer — is part of the state’s effort to remake its approach to contraception. The bet by state officials is that this will both reduce unintended pregnancies and help women escape poverty. It could also reduce state spending on Medicaid.

Working with an organization called Upstream, Delaware has rolled out the program to nearly every medical provider in the state over the past three years. It’s having big effects on the number of women requesting and receiving contraception in a state that recently had the nation’s highest rate of unplanned pregnancies.

“For me, to go before my General Assembly and talk about IUDs and implants, I probably wouldn’t have done it,” said Jack Markell, the former Delaware governor who helped bring Upstream to the state. “Not that contraception itself isn’t important, because it is. But, for me, the real hook was about opportunity.”

In committing to contraception on demand, at scale, Delaware faces challenges of logistics and also of trust. There have been past efforts to compel women to use long-acting contraceptives as a condition of probation, and even episodes of forced or unrequested sterilization.

“In this country we have a very long history that is very ugly and very deeply troubling of reproductive coercion,” said Andrea Miller, president of the National Institute for Reproductive Health, an advocacy group. While praising the goal of expanded access, she wondered if Upstream was tipping the scale by first telling patients about long-acting methods because they are “most effective.”

Doctors and health officials in Delaware say they emphasize that patients can choose any contraceptive — or reject them all. “We’re never trying to twist anyone’s arm — never,” said Dr. Karen Antell, a family physician at Christiana Care Health System, who sees patients and helps train other physicians.

Unplanned pregnancies remain astoundingly common. According to the Guttmacher Institute, they represented 45 percent of all pregnancies in the United States in 2011. The majority of abortions, which numbered more than 900,000 in 2014, are in response to unplanned pregnancy, and there are signs that the new program has pushed down Delaware’s abortion rate.

Children whose births are unplanned are likelier to have health complications, to be born into poverty, to stop their education sooner and to earn less. Mothers of unplanned children tend to give birth when they are younger, leave school earlier and earn less when older.

“I think if we’re looking for the biggest levers we have in this country to expand opportunity, one of the most important ones is helping women to achieve their own goals,” said one of Upstream’s founders, Mark Edwards, whose own father was born poor. “The whole conversation about opportunity begins before the child is born.”

Two more states — Washington and Massachusetts — announced this year that they would bring in the company to start similar projects there.

‘Set it and forget it’

There is some resistance to contraception in America — the Roman Catholic Church remains broadly opposed, and some anti-abortion and religious groups object to particular forms — but birth control is mostly uncontroversial. According to data from the Centers for Disease Control and Prevention, 99 percent of sexually active women between 15 and 44 have used some form of contraception.

Access widened in 2012, when the Affordable Care Act started requiring all insurers to cover every form of F.D.A.-approved contraception without any co-payment. (The Trump administration is trying to weaken those rules.) But that doesn’t mean that women are using birth control all the time — or using the methods that work best. Over the course of a year, 70 women out of 1,000 using birth control pills will become pregnant. For women using a hormonal IUD, a small device placed in the uterus, fewer than 4 out of 1,000 will become pregnant.

Use of long-acting devices remains low in the United States compared with other developed nations, in part because of the harmful poor design of an IUD in the 1970s. But modern IUDs are considered very safe. And an implant — a newer, match-size device in a woman’s upper arm — lasts three years and is the most effective form of contraception available.

These devices, often called LARCs, for long-acting reversible contraceptive, change a woman’s fertility default. Without a LARC, preventing pregnancy means taking steps like filling prescriptions and remembering to take a pill every day. With one, a woman won’t become pregnant until she takes the step of removing it.

“Set it and forget it,” said Venus Jones, an Upstream trainer. “We call it the Crock-Pot method.”

Long-acting contraceptives tend to cost more. Now, for any woman with insurance, they are free. They have become the top recommendation of the American College of Obstetricians and Gynecologists and the American Academy of Pediatrics. Usage has crept higher, to 14 percent of women using contraception in 2014 from 6 percent in 2008.

But there are still hurdles to their use. Much of what Upstream does involves helping practices change their processes: how they manage their inventory of devices; how they bill for their services; how they reshuffle systems to accommodate patients who may come in for something like diabetes and unexpectedly want an implant.

At a session for medical support staff on contraception care in Delaware, Jessica Mora, left, and Adriana Viveros-Sosa performed a collaboration exercise. Front-office workers have turned out to be crucial to the process.CreditMichelle Gustafson for The New York Times

Mr. Edwards initially thought that the key to improving contraception care would be training clinicians to insert the devices. But the experience in Delaware revealed the importance of front-office staffers. They do the scheduling, and they spend more time talking to patients than doctors do.

At a training session in Newark, Del., Ms. Jones played a game with the assembled medical assistants, social workers and nurses. She handed a volunteer a basket and asked the room to imagine what might keep someone from a medical appointment to obtain contraception.

“Taking off of work,” someone suggested. As the ideas piled up — child care, transportation, education, money, religion, culture — objects representing the reasons spilled out of the volunteer’s arms.

“How does she look right now?” Ms. Jones said. “She looks overloaded. This is why we don’t say, ‘You want to come back in two weeks?’ ”

As the front-office staff learned new routines, physicians practiced inserting IUDs using tabletop devices meant to mimic a human birth canal and uterus. The fake uterus had sensors, so the doctors could monitor if they’d hurt their artificial patient, and if they’d put the device in the right spot.

The idea of contraception as a key to economic mobility emerged after the 1960s and 1970s, when contraception and abortion became legal state by state. A string of studies showed that, when birth control arrived, women’s careers and educational attainment improved — and the number of children they had declined.

Isabel Sawhill, a senior fellow at the Brookings Institution, has measured the wide gulfs in outcomes between young women with unintended children and those with planned pregnancies later on. She has written extensively in support of expanded LARC access.

But it’s possible that youthful, unplanned pregnancies are a symptom of poverty, more than a cause.

One study of teenagers with unintended pregnancies found only small differences in outcomes between those who had miscarriages and those who delivered babies. A review of the returns on investment from contraception found relatively small effects.

“The causal link is kind of a big question mark,” said Caitlin Myers, an associate professor of economics at Middlebury College, who teaches a class on unplanned parenthood in the United States. Ms. Myers said an effort like Delaware’s would improve women’s autonomy and reduce abortions. But she was skeptical that it would necessarily reduce poverty. “To what extent does unintended pregnancy cause bad outcomes versus bad outcomes causing unintended pregnancies? It’s a symptom of poverty, of inequality, of hopelessness about the future.”

Sonia Ramirez at a prenatal visit with Dr. Karen Antell at Westside Family Healthcare in Wilmington, Del., in October. Ms. Ramirez’s first pregnancy was unplanned. Then she switched to long-acting contraception until she was ready for her second child.CreditMichelle Gustafson for The New York Times

The results so far

About seven years ago, as a teenager with no plans of becoming a mother, Sonia Ramirez missed a few birth control pills and gave birth to a son. This fall, at Westside Family Healthcare in Wilmington, Del., she was laughing with her doctor at the 28-week checkup ahead of the birth of her next child.

In between came different birth control methods. After her son was born, she used a hormonal IUD, then a copper one. Over those years, she lined up a job she loves and married. When she was ready to have a second child, her physician, Dr. Antell, removed her IUD.

Once her daughter is born, she wants another IUD right away. “You don’t have to remember to do anything,” she said.

Delaware officials say they’re pleased with the program so far. Upstream, which raises money from foundations and individuals, provided the state with the initial funding and staff to train health professionals, at a cost of about $200 for every woman in the state. While that sounds expensive, Upstream pitches itself as a one-time investment. “It ends up being really cheap if you think of two, three, four, five years of benefit,” Mr. Edwards said.

Dr. Karyl Rattay, Delaware’s director of public health, said she had received some letters from people opposed to birth control, but has been surprised by the program’s broad acceptance. She can also point to something that most conservative critics presumably like: The state’s abortion rate dropped a year after Upstream arrived, and the health department expects it to fall again.

That fits with research from the Guttmacher Institute, which credits improved contraceptive access for the recent declines in the country’s abortion rate.

The rate is now the lowest since government measurement began in 1969. An early foundation-funded LARC pilot program among young women in Colorado also pushed down the abortion rate there.

In Delaware, the number of women using some form of birth control has increased. Among the low-income women in the Title X family planning program who weren’t trying to become pregnant, the proportion choosing an IUD or an implant has jumped to 32 percent last year from 14 percent in 2014. The proportion using no birth control has fallen in half.

Child Trends, a research group helping the state, estimates that the changes will result in a 24 percent decline in unintended pregnancies this year. What that means for the economic trajectory of those women, and any future children they have, will take longer to find out.