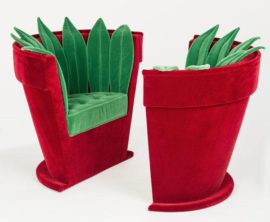 On a recent rainy Friday, Hubert le Gall, a French art furniture designer, was “at home” at the Twenty First Gallery in TriBeCa, on the eve of his first American retrospective.

Dressed in a gray sweater and bluejeans, Mr. le Gall, who speaks very quickly in precise, accented English, was perched on his deep red velvet Babeth sofa ($22,000), the back of which is shaped like two hearts. It is the least fanciful of his work, which is surrealistic and dreamy: A sleeping bronze dog erupts into a side table ($25,000); a furry giant bunny is also a wingback chair ($17,000); a plush flower pot, bright red with bright green leaves, is sliced in half to make two comfy seats ($18,000).

Mr. le Gall was in his early 20s and working in insurance when he started painting and making sculpture. “My old life,” he said. “My first life.” He bought a studio in Montmartre where Pierre Bonnard and other artists once worked; there, he began to make elaborate and lovely bronze pieces in limited editions, the work always teetering between art and furniture.

Now 58, he has a ravishing quasi-monograph out from Flammarion ($150) that shows the art works he’s made for an American collector’s hunting lodge in Normandy, among other designs. On this afternoon, he led a reporter through the 35-odd pieces in his gallery, explaining his inspirations and why, in particular, he counts Pinocchio among his muses.

“Pinocchio is a designer because he’s a liar like me,” said Mr. le Gall. “He just gives you dreams and illusions.” (This interview has been condensed and edited.) 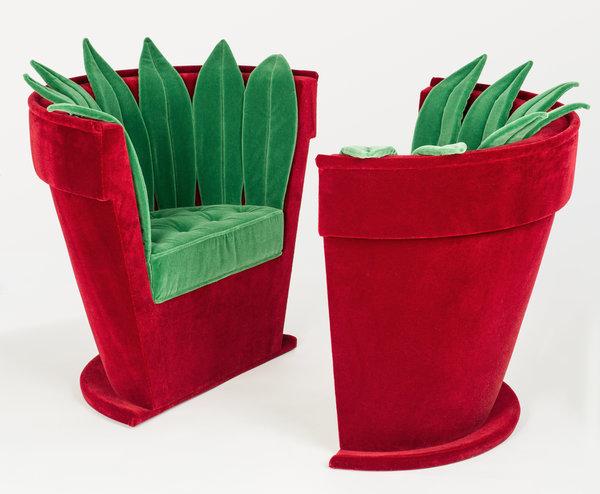 Your flower table — bronze daisies on bronze stalks — is your first piece. Can you tell me its story?

The marguerite, or daisy, motif, seen in the studio of Mr. le Gall in Paris, where Pierre Bonnard and other artists once worked.CreditPascaline Noack

Do you mean the daisy?

Yes, the marguerite. And then the question was, what is the material of my time? At the time we spoke a lot about Basquiat, and people would say, “The paintings are not of good quality because he would just buy cheap paint on the street,” so I was just like that. I made this archetypal drawing of the shape of the marguerite, as a child would, and made it in bronze and then painted it as if it were a silk-screen print. My idea was to do something that was classic because I like to play with history but also be in my time.

Speaking of history, I know that you work in an atelier that used to belong to Pierre Bonnard. Can you tell me how you came to be living in such a place, with such a provenance?

You know, I have a star looking down at me. It was 1991. I was painting and making sculpture and a little bit of furniture. A friend said, “I have just bought a studio in Montmartre and I don’t want it because it’s so far away.” I said: “I know what you will do. You will sell it to me.”

The next day I went out to this incredible place. It had always been an artist’s place, not to live, just to work. Not just Bonnard but Miró, Jean Arp. It was very cheap, just wood and bricks, very like the Bateau-Lavoir [a former factory in Montmartre known as the “laundry boat” that was famous for its art world tenants, like Picasso, Modigliani and Gris].

After them there was a generation of artists who were not so successful and they left things in the place. I live in the center of Paris and this place is 10 minutes away by bike. I can say I will keep this place forever.

A view of his studio in Montmartre.CreditPascaline Noack

You have described your work as “in-between objects,” meaning in between form and sculpture, between good taste and bad, and occupying a “borderline where the object seems to hesitate before taking sides.” That’s pretty great. Can you discuss?

O.K., so you see the two mirrors [two wall pieces in gilded frames with gilded blobs on them that look like huge golden tears; one “mirror” has more blobs than the other] — at what point is it still a mirror? At what point can you stop seeing yourself? The question for me is, what’s really art? Is it because there is no function that it is art? I’m always inspired by this idea.

His “Méga Météora,” a kind of mirror-sculpture, is an example of what Mr. le Gall describes as an “in-between object.”CreditIke Edeani for The New York Times

Tell me about these velvet chairs, the voluptuous red one entwined with bronze apples and the blue chair with its phallic pillow.

These two are quite new. The red one is Eve and the blue one is Adam.

Adam was inspired by a Giacometti sculpture from 1927 called “Danseurs,” and Eve by a piece by Henry Moore. I had no idea where I would go, what they would end up being.

They both seem very innocent and happy, clearly you have captured them before the fall. Adam seems particularly happy.

Yes, he is always happy. I am very interested in the relationship we have with things. There are two affective ideas here [patting the furry bunny ears of his Lapin Câlin chair].

The Lapin Câlin chair by Mr. le Gall with a back that resembles rabbit ears.CreditBruno Simon

The first one is the rabbit, so cute, so charming. The second one is the idea of the Chesterfield seat. When you buy it it’s a little bit hard, because it’s leather. In 10 years it has the shape of your body, and in 20 years if you have to throw it away it’s a pity because it’s so much your story.

You’ve made door wedges of gilded mice; flower pots with dogs peeking over the sides; garden spotlights shaped like ostriches with their heads stuck in the turf. Are there other household objects you’d like to tackle — a mixing spoon or a cheese grater perhaps?’

No. Sometimes I just do something not knowing what the functionality will be at the end. And sometimes I just have a vision. My bull cabinet [a patinated bronze number with a swirly gold leaf appliqué and a bull’s head on top] came to me in the bath.

I’m curious if your work is ever in response to the grimness of world events. Is it intentional on your part to offer a kind of escape?

Are you a gloomy or an easygoing person?

Easygoing. Because I am quite happy; every day I’m excited. Pleasure is at the center of my work.