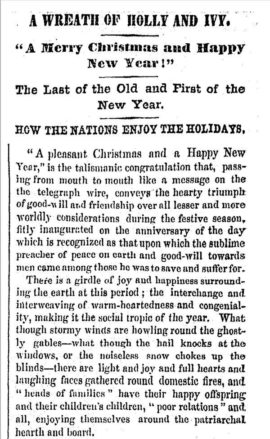 “A Christmas Carol” came out on Dec. 19, 1843, well before The New York Times began publishing in 1851. The novel — with beautiful illustrations by John Leech — was a best-seller in both England and the United States. Because there were no international copyright laws, Dickens didn’t make a cent from American editions.

The illustrations in “A Christmas Carol” were done by John Leech.

In December 1855, the paper quoted “A Christmas Carol” in a front-page Christmas Day piece about holiday traditions around the world: “Let us raise our voice with Dickens … ‘Give three cheers for the Christmas old. …’” 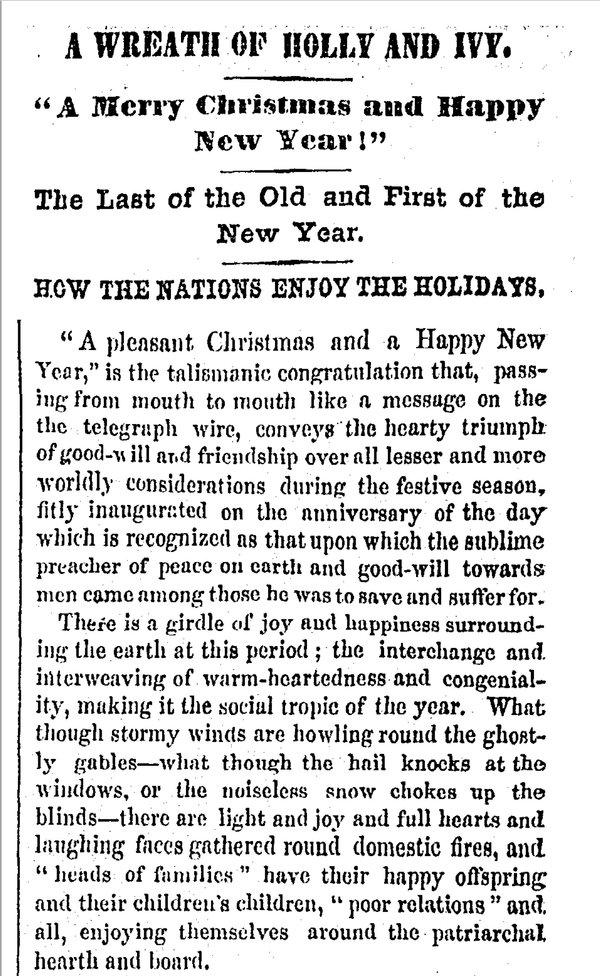 Dickens arrived in New York City in December 1867 and was, as The Times put it, “permitted to go quietly to his hotel. No attempt was made to inflict upon him the annoyance of a formal reception, or to intrude upon his privacy.” At a public reading on Dec. 9, 1867 — which was sold out — he read “A Christmas Carol” to a rapt crowd at Steinway Hall, which was then on 14th Street: “Mr. Dickens makes free use of gesticulation. … He stirs the gravy, when telling how Mrs. Cratchit made it; mashes the potatoes with something of Master Peter’s ‘incredible vigor,’ dusts the hot plates as Martha did, and makes a face of infinite wonderment and exultation when shouting, in the piping tones of the two youngest Cratchits, ‘There’s such a goose, Martha!’”

Charles Dickens came to New York in 1867, and gave a public reading of «A Christmas Carol» at Steinway Hall, which was then on 14th Street.CreditLibrary of Congress

Dickens died on June 9, 1870, and when the news reached the United States two days later, his obituary took up most of the paper’s front page and described his famous New York readings of “A Christmas Carol.”

On Christmas Day 1876, a lovely front-page essay in The Times referenced the novel in its opening line.

October 18, 1890: Scandal! Did a copy of “A Christmas Carol” belonging to Queen Victoria go missing? “The Royal Librarian knows nothing about it,” sniffed The Times.

On May 4, 1901, The Times printed a charming reminiscence from a woman who had sent a boutonniere to Dickens for one of his 1868 readings of “A Christmas Carol” in Philadelphia.

On Dec. 8, 1912, The Times featured photos of the original manuscript of “A Christmas Carol,” purchased by American financier J.P. Morgan and displayed at New York’s Morgan Library. “It is written in a well-known, scratchy hand on sheets of yellowing paper,” The Times reported, adding, “It is, of course, a well-nigh priceless treasure. And it is so less because it is the writing of a great work by a great novelist than because it is, in its genuineness and its intimacy, something that for nearly three-quarters of a century has been part of the thought of Christmas cheer.”

On Jan. 28, 1923, the paper announced the publication of an edition of the novel illustrated by F.D. Bedford, which would go on to become a staple in many American homes.

An edition of «A Christmas Carol» that was illustrated by F.D. Bedford became a staple in many American homes.

On the novel’s 80th anniversary in 1923, The Times called it “the greatest little book in the world.”

In an essay for The New York Times on Dec. 24, 1933, Dickens’s son Henry discussed what Christmas meant to his father and described how the family celebrated the holiday: “There was usually a long walk with the dogs on the afternoon of Christmas Day; and the festivities in the evening, varied as they were, were typical of the time; that is to say, they were all brightened by good humor and high spirits. Sometimes there would be a charade; sometimes games, of which he was particularly fond; sometimes a country dance with the servants brought in to take their part. All this time Charles Dickens was the life and soul of the party. As he did in everything else, he threw his heart into it. His merriment was no mere pretense; his laughter bubbled over and was contagious; his buoyancy was immense; and there was not a soul present who did not become infected with the same feeling of genuine happiness.”

On Dec. 24, 1937, in a White House decked with holly, mistletoe and a white-trimmed spruce, President Franklin D. Roosevelt — as was his custom — read “A Christmas Carol” aloud to his family. He was so famous for this rendition that The Times once suggested it should become a radio broadcast.

Franklin D. Roosevelt of New York, who had just been elected president of the United States, with his wife, Eleanor, holding one of their granddaughters, on Christmas Day in 1932.CreditAssociated Press

In 1943, the paper celebrated the centennial of the novel with an affectionate full-page tribute: “After a century the earth is still afflicted, indeed, with misery, famine, revolution and war. But there is also such an awakening of the humane spirit of brotherhood throughout the world as has never been seen before.”

In a December 1963 piece called “Dining with the Cratchits,” Craig Claiborne recreated some of the dishes served at the Cratchits’ holiday feast.

These are just a fraction of the pieces in the archives about “A Christmas Carol.” As an essay in The Book Review’s pages on Dec. 14, 1901, said so well, “The story of Tiny Tim has made many a Scrooge better, kinder, more sociable.”

FacebookshareGoogle+sharePinterestpin it
Medical News Today: Infections and cancer: The link could be stronger than we thinkQ&A: Billy Eichner Has Never Been to Paris
Latest