On Dessert: A Big, Shared Cookie Is an Invitation to Stay and Talk Into the Night 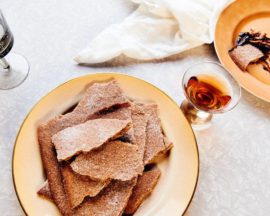 For about 30 years, I’ve been tacking pictures, memos, small talismans, odd cards and clippings to the cork wall behind my desk. Among the mementos are a recipe for my Aunt Bertha’s apple cake, which I’ve never made; many photographs of our son when he was half the height that he is today; pages from articles I wrote long ago; New Yorker cartoons; and some family snapshots from the days when we printed such things. The wall is seven feet long and messy — a haphazard collage more closely resembling an archaeological pileup than a purposeful archive. Most of the time, I walk into my room and pay no attention to the pinnings; in those moments, the accumulation is just wallpaper. But sometimes, when I’m working, I’ll swivel my chair idly, catch a glimpse of an image and stop for a minute. Pictures of my mother do that to me often. And then, a few weeks ago, my eyes fell on a button that’s seemingly been there forever. It says: Life is uncertain … eat dessert first.

I’m sure the quote wasn’t meant to be parsed, but when work isn’t going smoothly, distraction is welcome, and so I spent more time than I should have staring at the button and considering its message. I couldn’t argue with life’s being uncertain, but in the end, my convictions about what a meal should be, particularly a meal for family and friends, wouldn’t allow me to champion dessert first.

Even before I cooked my first dinner, which I didn’t do until after I was married, I knew what I wanted a meal in my eventual home to be like. My vision involved many people and lots of conversation. I wanted to recreate the spirit of the Friday-night meals my husband, Michael, grew up with. Unlike anything I knew as a child, these meals started with a half-dozen people around the table and often ended with twice as many. There was a revolving cast of aunts and uncles, the occasional cousin and a loyal coterie of longtime friends. All of them told stories, some finished one another’s sentences, many interrupted, no one was shy and if Aunt Ruth showed up, she might break into song. As more people pulled up chairs, more story lines spun. There might be a confidential whisper now and then; inevitably there was innocent gossip. Still, it wasn’t until the cakes and pies were placed — as platters were passed, slices cut, coffee poured, guests resettled at the table — that the evening took its intended shape. However much time had passed, that much time was still to come. Dessert was the course to be lingered over. And because of this, the plates were never cleared and the coffeepot was never emptied. 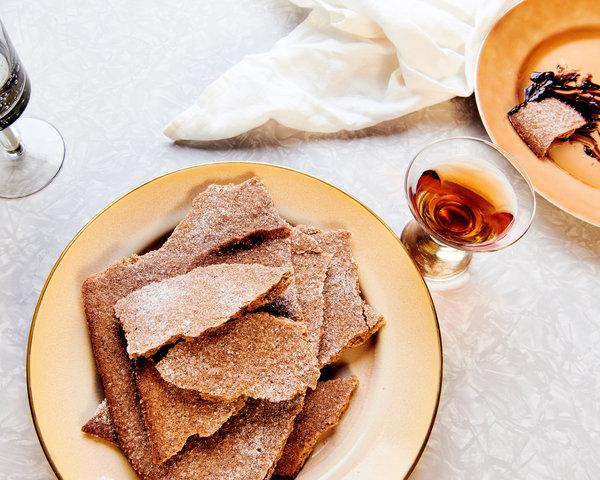 The dinners I make at home are never like those. Mine are less open-house, more come-at-8; less extended family, more circle of friends; and no matter the number of people around the table, usually more subdued — I can remember only one time when anyone broke into song: It was in Paris, the song was “Oklahoma” and it was all pretty wonderful until a neighbor complained. But whatever the menu, whoever the friends, the arc of the evening is always the same: Dessert is the denouement revealing all that the meal is meant to be.

Any dessert can set the moment, but the best are those that can be eaten slowly. I love ice-cream sundaes, but they demand so much attention — all conversation stops when there’s a risk of melted ice cream. Bundt cakes are nice — they invite returning for another sliver and perhaps another after that. Pies are fine, small pastries are good and cookies are almost perfect, because they’re eaten slowly and usually in multiples. Even better than a plate of cookies, though, is one large cookie meant to be broken, bit by bit, in an act of communal enjoyment.

My favorite large cookie, a brown-sugar cookie redolent of ginger, honey, cinnamon and clove, carries the scent of the season and tacks between crisp and slightly chewy, between gingersnap and gingerbread. That it has ground coffee in it marks it as a sweet for grown-ups, one that’s as good with whiskey as it is with espresso or tea. Roll the cookie thin; its shape should be odd and ragged, anything but perfect. Place it on a board, a big napkin or directly on the table, break off a chunk and encourage everyone to follow. A couple of dipping sauces — maybe caramel and chocolate — are always a fine addition.

The last time I made this cookie, I watched as friends reached across the table and whittled it down, as crumbs scattered and another hour went by, and I thought that perhaps I should design a new button, one that would say: Life is uncertain, so wait for dessert and then make it last… a long time.

FacebookshareGoogle+sharePinterestpin it
36 Hours: 36 Hours in AnaheimLiving With Cancer: In Praise of Gentleness
Latest