Med Students Get an Extra Match on ‘Match Day’

Match Day at the University of Mississippi Medical Center is always a big deal. It’s the day medical students in their final year learn where they will be doing their residencies for the next three to five years.

The nationwide system works a little like rushing for a college sorority or fraternity. Medical institutions rank their preference of medical students, and the students do the same. An algorithm determines “a match,” which the students are contractually obligated to abide by.

The match is announced at a ceremony full of pomp and tradition. In Mississippi, students, along with family and friends, gather in a large auditorium. Students walk on stage one by one, open a sealed envelope, and read the contents aloud. Prizes are awarded to students in various categories, like the farthest away residency program.

This year Match Day, which took place on March 15, came with a surprise: One student got her match not just for her residency, but for life.

Morgan Davis, 27, was already nervous for her time on stage. “I felt like I wanted to throw up,” she said. “I couldn’t breath.” She felt better when she opened her envelope saying she matched with the University of California San Diego, her first choice.

But then she was handed another envelope. Inside was a sheet of paper saying, “Will you marry me?” She turned around and saw her now-financé, Maurice Mills, 25, a first lieutenant in the United States Marines, by her side with an engagement ring.

“I knew it was such a big day for Morgan,” said Mr. Mills, who goes by the nickname Mo. “She had been working so hard and traveling all over the world doing interviews and rotations. I figured what a better way to celebrate all the work she had done than a proposal?” He paused before adding, “I did feel really bad for the person right behind us.”

Across the country, couples are escalating Match Day by using it as an opportunity to propose. For some, it’s a way to affirm their commitment as a partner enters a new phase in medical training. 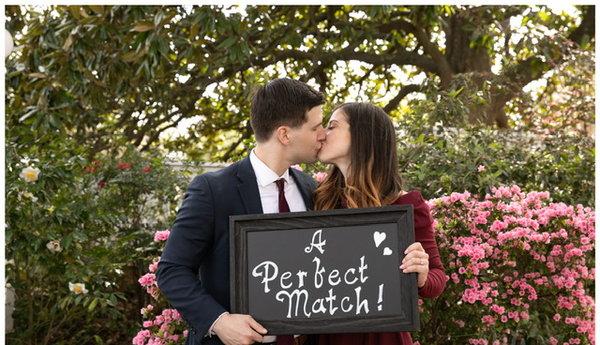 In her class of 146 students, Ms. Davis wasn’t the only one to get a ring that day. Her classmate, Hayden Sanders, got on his knee for longtime girlfriend Jessica Van Duyne.

However, Mr. Sanders did it more privately. After the Match Day ceremony Ms. Van Duyne thought she was headed to a celebratory lunch for her boyfriend. But when she arrived at Fairview Inn, a historic home in Jackson, she saw a gazebo outside covered in roses and ferns and containing a scrapbook full of pictures of the couple.

“I looked at Hayden and said, ‘You don’t want to spend this day to yourself and celebrate where you are matching?’” Ms. Van Duyne said. “It made it so special that he made this day that was supposed to be about him, about us.” 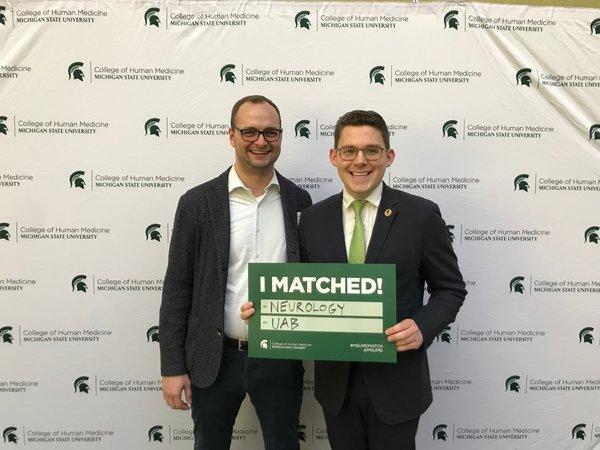 Last March, Luke Ansorge, 27, proposed to Luke Fischer, 31, on his Match Day at Michigan State College of Human Medicine. While he was reading his letter stating where he was going for residency, he handed his boyfriend a letter of his own, one that contained a proposal.

The couple decided that no matter where Mr. Ansorge matched (it ended up being the University of Alabama in Birmingham), Mr. Fisher would be joining him. Being engaged helped him convince his employer, Meijer, a regional grocery store chain where he introduces new products, to let him work remotely.

“After Match Day I told Meijer’s leadership that I have to go to Alabama because my fiancé is contractually obligated to go there,” Mr. Fischer said. “I think the fact that we were engaged made it more serious for them. He wasn’t just my boyfriend. I wasn’t just running away to be in love and do something crazy.”

Another benefit to proposing on Match Day is that the couple’s closest friends and family are already present for the ceremony. This makes it easier to keep the other reason for their presence a surprise.

“I guess I should have known what was happening because most people had five or so family members in the crowd and I had almost 30,” Ms. Davis said.

If there is a downside to this new tradition it’s the timing. Many couples have no time to plan a wedding when at least one person is moving (most likely two) and starting a new job.

“Sometimes I work 80, 85 hours a week,” Mr. Ansorge said. “We just picked up our lives and moved to Alabama, and I started a new job. It seems like a lot to put on a wedding on top of us. Luckily we have no pressure from family or friends to set a date, so we haven’t yet.”

Mr. Sanders felt the same way. “We don’t want that long of an engagement, but it would be a lot to get married right now,” he said. “Next year I’ll be starting my intern year. Then I want to do a fellowship after that. We got to one light at the end of the tunnel, but there are more tunnels. We’ll do it when it feels more manageable.”

Some couples, however, opt for a short engagement.

David Barton, 30, a medical student at Virginia Tech Carilion School of Medicine, decided to propose to Kaylyn Williams, 30, a veterinarian, in January. “I proposed after interviews because we wanted to be formally committed to each other before we started the next phase of our lives together during residency,” he said.

Proposing ahead of time also allowed him to focus on his school’s Match Day, which is a lavish affair with students dressing in theme. This year it was “The Ides of Match,” and they wore togas and laurel wreaths and read their match results from a scroll.

Knowing what a crazy time moving and starting a residency will be the couple decided to schedule their wedding for May 25, just before it happens. “We like the symbolism of using our wedding to cap this, Virginia-based, phase of our lives,” Mr. Barton said. “We will use our honeymoon to launch our next phase.”