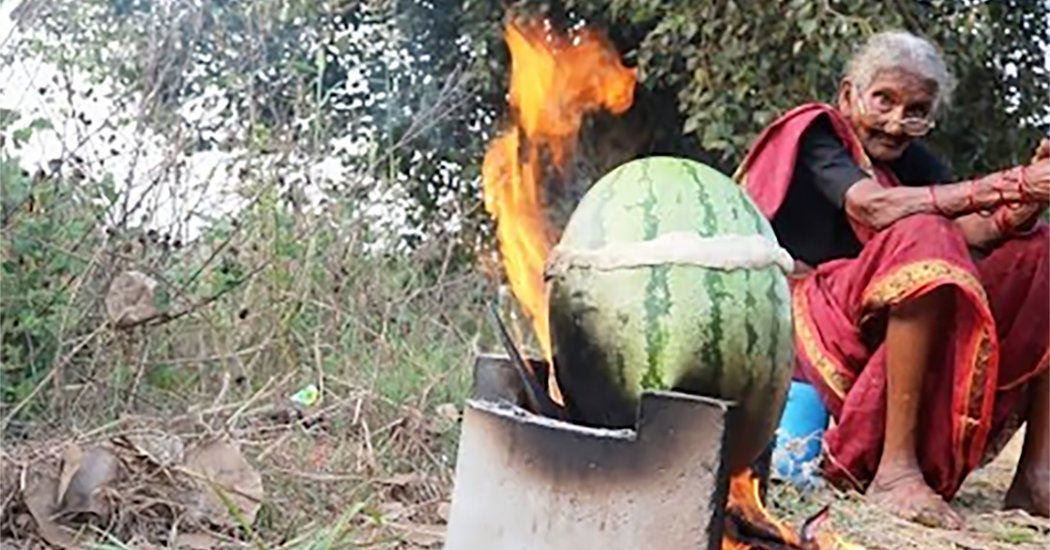 NEW DELHI — Mastanamma got her big break at age 105.

After she prepared an especially delicious eggplant curry, her great-grandson suggested that he film her cooking and then post the videos on YouTube.

No matter that she was more than 100 years old, suffered from cataracts, wore dentures, cooked outside on an open fire and sometimes roasted chicken inside a steaming watermelon. That was all part of the charm.

Over the next two years, she became the star of a YouTube channel with an audience of more than one million subscribers. She specialized in adding flair to traditional Indian dishes, especially fish ones, but occasionally experimented with chicken pizza and chocolate cake.

“She knew she was famous,” said Srinath Reddy, who helped start the channel. “She loved that.”

On Sunday, Mastanamma’s family and friends announced, she died at age 107. “MISS YOU GRANNY,” the moderators of her YouTube channel, Country Foods, wrote. Mr. Reddy described her as one of a kind.

Born in a rural village in the southern Indian state of Andhra Pradesh, Karre Mastanamma married at 11 years old. By 22, her husband was dead. With no education, she was left to care for their five children.

“How can I survive without you?” Mastanamma, as she would come to be known professionally, recalled asking her husband as he was dying. “He said: ‘You are clever. Don’t worry.’ ”

To support her children, Mastanamma worked as a laborer, earning a few dollars a day carrying 200-pound rice sacks on her back. Over the years, she would lose four of her children to disease. For much of her life, she lived in a small hut made of palm leaves in the village of Gudiwada.

“She never liked leaving that hut,” Mr. Reddy said. “Ever.”

In 2016, her great-grandson, Karre Laxman, and Mr. Reddy, a friend, started filming the videos of her cooking and posting them on Country Foods.

Mastanamma peeled ginger with her thumbs, stored bird eggs in her sari and posed for pictures with lamb heads. She made it all, barking out orders to subordinates from a squatted position over simmering pots. On the menu were snails, catla fish and emu egg fry.

Fans loved her salt-of-the-earth sense of humor. In interviews, she joked about breaking her dentures, having given her husband a $0.15 dowry, and the time a pair of brothers teased her when she was a young woman. After one of the brothers touched her hand and long curly hair, she threw him in a river.

“His brother asked me to save him,” she recalled in a video. “I said: ‘How dare he touch me! If you ask me to save him, I will throw you in the river, too!”

Mastanamma loved cooking for others, regularly feeding biryani to people and doling out pieces of spiced meat cooling on banana leaves to men working in the fields. She also loved her fans.

Wearing off-kilter aviator sunglasses, Mastanamma waves at the camera from a leather-cushioned car in one clip on Country Foods. “Hi, kids!” she says, before blurting out observations. “I lost my teeth, naturally. Before, I was so beautiful. My age is above 100 years! It’s in government records.”

“Nobody cooks like me in my family,” she brags in another video.

In April, Mastanamma celebrated her 107th birthday with cake and party hats. She was surrounded by children.

After her birthday, Mastanamma appeared sporadically in new videos on Country Foods and fans asked about her health. Several months later, her last son died. A few weeks ago, she fell ill, and last week she slipped into unconsciousness. She died peacefully in Gudiwada, Mr. Reddy said, “her trademark innocent smile quietly playing around the corner of her lips.”

The last few videos on Country Foods are of Mastanamma’s funeral. To the thump of drums, a bright yellow truck carrying her body crawls along a dirt road. Well-wishers gather in the street, dancing, laughing, whistling and sprinkling the open coffin with hundreds of flower petals.

FacebookshareGoogle+sharePinterestpin it
25 Gifts They Won’t Believe Cost Less Than $5Why Is Obamacare Enrollment Down?
Latest