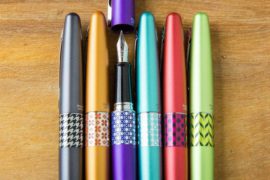 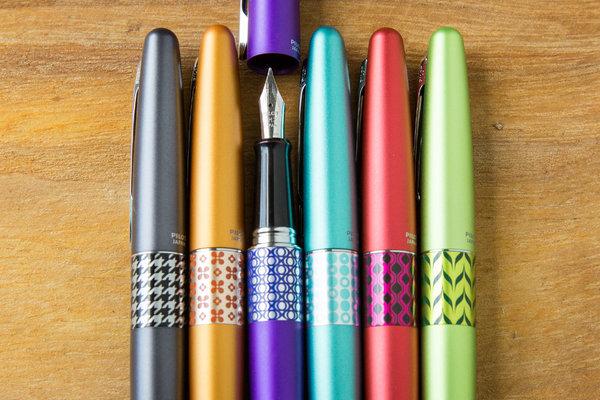 Around 40 people had gathered on a recent weekday evening in SoHo at the Lamy store, a 600-square-foot ground-floor showcase of contemporary Germanic pen design. Packed around a table with notepads and test pens, the group, ethnically diverse but mostly men, lacked the slick appearance you expect of customers at a luxury boutique.

In fact, it quickly became clear that these were nerds. Twenty-first-century pen nerds.

They had come for several reasons. For a pen nerd, there’s endless pleasure in sharing one’s collection of fountain pens, or “fps” as they’re called on the Reddit board where they live when not at shows or events.

Lamy was handing out free Vibrant Pink Al-Stars, a sleek aluminum-bodied pen, and plastic Safaris (each around $40). And then there was the guest of honor: Brian Goulet, of Goulet pens, who had the handsomeness of a 1950s young dad, thick hair like mink, broad shoulders, a warm handshake.

“He’s, like, a rock star in the world of pens,” said Steve Birkhold, the C.E.O. of Universal Luxury Brands, which own the American distribution rights to Lamy. Mr. Birkhold, formerly the C.E.O. of Diesel and Lacoste, has started his own company with a partner, Eli Hollander, to bring niche, design-focused European brands to the United States.

Lamy, whose headquarters are in Heidelberg, is still owned by the German family that founded it in the 1930s. Its Lamy 2000, introduced in 1966, a Bauhaus-inspired minimalist steel pen, made the brand’s reputation as the cool pen maker.

This year Mr. Birkhold opened the SoHo store and another in the Palace Hotel in San Francisco. “Business has already tripled,” he said, since he bought the United States distribution rights in 2017. The office supply and paper company that held them previously, he added, didn’t understand how to take an “omni-channel” approach and correctly market the “pen brand for millennials.”

The fountain pen has been imperiled since the rise of disposable ballpoints in the 1960s; by the ’90s and early aughts the almighty keyboard was positioned to kill it off entirely.

Once-stalwart household names like Sheaffer (Sylvia Plath’s preferred brand) were closing American factories to manufacture cheap parts in Asia and seeking corporate buyers. Holdout users were mainly aging collectors, and only a few companies, like Montblanc, which had been acquired in 1988 by Richemont, were flourishing.

Mr. Goulet, now 34, opened his namesake e-commerce site at 25, in 2009, with his wife, Rachel Goulet. His affable but rigorous social-media presence and tantalizing website are credited with making the old-fashioned tool not just literary but lit.

During his store appearance, he at first was standing by himself. As the evening drew on, and free champagne flowed, attendees edged closer to him, the way children may shyly creep toward a storyteller.

Soon they were asking questions eagerly: What was his favorite pen? Favorite nib? Does he think a “demonstrator” pen that shows its mechanism, by the upstart Taiwanese brand Twsbi, look like a vape? Would he be eating one of the large sugar cookies of his head in icing Lamy had set out for the party from the bakery Cupcake Market? (No, he would be taking them home for his two grade-school children, who will of course be learning cursive.)

An avid woodworker, Mr. Goulet originally planned for the website to sell wooden fountain pens he made, but soon noticed that the accessories he sold to go with them, paper and ink, were doing well, without the hours of labor.

Generationally at ease with the so-called pivot (he majored in commercial real estate management at Virginia Tech), he gave up on his own pens.

“That was an emotionally hard transition, but a smart business decision,” he said on the phone later, from Goulet Pens in Richmond, Va., where he has a 24,000-square-foot building and 39 full-time employees.

The company’s website cannily bottles and sells small ink samples and walks you through how-tos: how to “flush” a pen, how to use a wax seal (there are now flexible ones that can go through the postal machines). There are also reviews of new pens and interviews with pen personalities.

Instagram, where illustrators post video demonstrations, has inevitably furthered pen nerd-dom. Fountain-pen ink looks beautiful as it dries, since it often has shading, or color variations, and sometimes shifting iridescence.

Then there are the new start-up offices, coffee shops, which lack supply closets. “Someone might pull out a notebook from CVS and a Bic,” Mr. Birkhold said. “But someone else has a cool notebook and fountain pen. They personify your personality.”

Motivating! Calligraphy in a bullet journal by Kara Benz, a.k.a., Boho Berry.CreditKara Benz

No. 1 With a Bullet Journal

Originally a straightforward system of organizing your how-to lists (and life) on pages with small points arranged as a grid, bullet journaling has become almost an art form. And it is one that is enhanced by a fountain pen, or so Kara Benz (a.k.a., Boho Berry) demonstrated at the Lamy event, where she was a host. The journaling is perfect for a form of faux calligraphy that involves fattening every down stroke, the rudiments of which anyone can learn in an hour or two.

Ms. Benz, who lives in New Jersey and has electric-violet hair, uses shelves of different writing implements to create her impossibly artful rainbow pages of lists that include items like “declutter X or Y” or “book a spa day,” and never “spend all day making this page.”

But the company’s customers are not all such obvious free spirits. “A lot of people are administrative professionals who just have normal cubicle office jobs, and they just want interesting tools to make their day more their own,” Mr. Goulet said.

“I got into fountain pens about three months ago,” said Jeremy Whelchel, a young man in a puffer jacket during a holiday event at the Manhattan Fountain Pen Hospital downtown. The store is one of the few general pen shops that has survived, because it has the Wall Street crowd’s business.

Most of the people piling up to the counters there looked like the sort of 50-and-ups who would of course love a fancy, fusty fountain pen. The old-guard pen scene, like the cigar aficionados, appreciates a certain gaudiness. “Encrusted” might be the defining adjective to apply to the pricey, themed wares (“Game of Thrones,” Samurai) of Montegrappa, an Italian brand.

He had an old fountain pen lying around for years, but it was always dry and scratchy. “I used to associate them with status seekers, with Montblanc, guys with fancy watches,” Mr. Whelchel said. “I’m not into that, I’m into the gadget aspect.”

The subreddit is “a great community,” he said, “with useful instructionals.” He started with one Pilot Metropolitan, then bought a bunch of them to get familiar with the interchangeable nibs and mechanisms. “It’s like a bike: If you keep them tuned up and take care of them, they’re great.” He is curious to see the Homo Sapiens Evolution, by the Italian brand Visconti. It is made from Mount Etna lava.

Fancy: The Visconti Homo Sapiens Bronze Age fountain pen is made from hardened basaltic lava from the Mount Etna volcano in Italy.

“I’m not a convert, but it’s nice to mark up a document with one,” said his girlfriend, Hailey DeKraker, a lawyer. “Now that I have my ink guy!”

Mr. Whelchel doesn’t tend to use the pens for daily correspondence. “More like notebooks,” he said.

“You write me cards!” Ms. DeKraker said. “But yeah, it’s not ‘Dear Margaret, a strong wind blew in over the hills today. …’”

Mr. Whelchel is an engineer at Google, and he likes the pens’ through-line to the previous implications of that job title: building bridges, drawing plans on paper. With the same familiar irony that applies across the recent analog revivalism, the engine that was killing the fountain pen (and the pen store) as a necessity has resurrected it as a pure pleasure and a novel way to display personal style.

The “disruption” of the fountain-pen market provides a soothing escape from all the others: Amazon’s unnerving dominion, Facebook’s alleged tainting of democracy itself, and childhood’s fast fade into screens.

“People describe drawing ink into their pen from an ink bottle and wiping the nib as a Zenlike experience,” said Stephen Brown, 34, a cognitive psychologist from the Netherlands who teaches at a community college in Red Deer, Alberta.

His YouTube channel, SBREBrown, on which he reviews pens, has 45,000 subscribers. (“I didn’t expect this,” Mr. Brown said. “Yes, some channels have millions, but I’m not telling people how to create a smoky eye!”) There’s little friction writing with a fountain pen; unlike a ballpoint or roller ball, the mechanism is essentially a controlled ink leak. Hands don’t cramp. Thoughts promise to pour out easily.

“People are also reading studies coming out indicating that writing things down helps you remember,” said Jane Andreasen, 27, a pen nerd with a Mia Farrow crop and Fury Road boots. “It’s an easy step to go from, ‘I want to write more to, ‘and now I have a fountain pen,’ to ‘now I have five, what happened to me?’” Ms. Andreasen is the resident fountain-pen expert at the happening Oakland, Calif., outpost of Flax Art & Design, an art supply store.

Bring on the Blotters

Nibs recall a time when the act of signing documents promised law and order. A time when Thomas Jefferson used his (up-to-the-minute) metal pen to draft the Declaration of Independence for people who had faith in a “we the” and the God indicated as the key witness to the ensuing signatures.

Considering this, it makes sense that one of the world’s largest pen shows is in Washington, D.C. It also makes sense that there’s some pen political drama, captured by the ink maker Nathan Tardif, whose Noodler’s inks are known for their inventiveness, affordability and the libertarian convictions hidden in their charming illustrated labels.

Mr. Tardif follows his ethics of self-sufficiency in the woods of Massachusetts, where he concocts and bottles his inks by himself. His Bernanke Black Ink is fast drying — an allusion to the Federal Reserve’s act of essentially printing money by lowering interest rates during the financial crisis — and his Berning Red, also fast drying, a red for lefties, shows Bernie Sanders’s head in front of the state seal of the Soviet Socialist Republic of Azerbaijan. Mr. Tardif’s says his Warden’s ink has properties that make it fraud proof.

Mr. Tardif is an eccentric and not representative, Mr. Brown said, but, in his observations, the pre-internet dealers did tend to lean right and male.

Mr. Brown’s wife, Aziza Asgarali, runs Gourmet Pens, a pen blog. “Just to reveal how much of a pen nerd I am, we met when we were both guests on a fountain-pen podcast,” Mr. Brown said. But even though the pen world contains a few female luminaries, like Beate Oblau at Lamy (known for riding a Ducati) and Regina Martini, a dealer specializing in vintage collectibles and Pelikan, “female enthusiasts are less visible,” Ms. Andreasen said.

She knows how to de-rust a vintage ink reservoir and replace ancient cracked bladders, but four years ago she was belittled on the Fountain Pen Network forum by a male commenter who didn’t like a millennial woman disagreeing with him. “But I’m going to try again because the whole community is changing,” Ms. Andreasen said.

Mr. Brown’s subscribers are global, many from India and Asia, where fountain pens are more common. But when Ms. Asgarali, whose parents came to Canada from Trinidad, was featured in a YouTube review with her husband, a commenter wrote: “I used to respect you, but I don’t now that I see you’re married to a half negro.”

“I guess this says less about the pen world,” Mr. Brown said with a sigh, “and more about the world.”