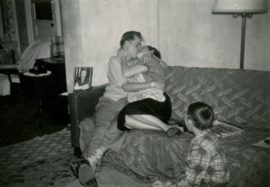 Kissing — that simple act of romance — is a hard thing to explain. But Barbara Levine and Paige Ramey of Project B, a group “dedicated to collecting and preserving vintage vernacular photography,” are trying. 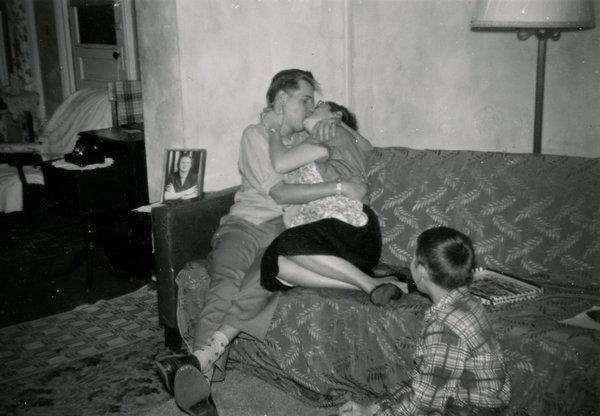 For nearly two decades, Ms. Levine and Ms. Ramey have curated collections of found images in order to better understand our fascination with photographing seemingly mundane activities such as knitting or fishing. Their most recent book, “People Kissing: A Century of Photographs,” is a compilation of images the pair found when they searched their photo archives, which they accumulated over the years from eBay, garage sales and people who are unsure about what to do with boxes of family photos. The book includes more than 100 photographs and postcards, dating back to the late-19th-century Victorian period, of people locking lips, be it as a joke among friends, as an overdramatized performance for the camera or as an emotionally charged act of love.

“When you look at a found photograph, you’re activating a story,” Ms. Levine said, “so when I started to notice how many pictures we had of people kissing in our archive, it seemed like a real jumping-off point for discussion, for examination.”

Kissing is a common gesture. We see it in movies and on social media posts. But the act became something worthy of memorializing among everyday people just a little over a century ago, Ms. Levine and Ms. Ramey wrote with Peter L. Stein in the book’s introductory essay. Photographs and postcards from the late 19th and early 20th centuries show an awkward and unnatural formality — despite the moment’s intimacy — thanks to subjects “keeping stock-still for the duration of an exposure,” they wrote. The accompanying text for many of the images reflects conservative sensibilities of the time: “Keeping healthy,” reads one postcard from 1911 of a man in a suit and white gloves planting one on a woman with her eyes slightly opened; another co-opts a lusty smooch to warn viewers of the perils of infidelity.

The seemingly endless supply of photos in the archive enabled Ms. Levine and Ms. Ramey to pick out themes and to show changing mores surrounding kissing and romance over the years.

“You watch our photographic literacy develop as the years go by, and there are different things in different eras that are interesting,” Ms. Levine said, “so it’s an important part of story to try to tell that story through shifting ideas and trends.”

Photographs of tender moments between same-sex couples became more common in their collection as the years passed by, including one of two women embracing the kitsch of the Kiss-O-Meter. Meanwhile, snapshots from the 1950s capture the rise of youthful rebellion: passionate yet candid make-out sessions, on picnic blankets with hair tossed and bodies intertwined, and near snowy banks during a nightly outing, with a young couple paying no attention to their friends’ reactions.

Kissing, as these photos show, doesn’t always require baring one’s soul. Interspersed between amorous moments are more dramatic and humorous demonstrations. Adults coax toddlers to imitate them, while giggling childhood friends peck one another’s cheeks. And it’s not unreasonable to ask whether it was a sense of devotion or a desire to perform for the camera that inspired a man to stretch his torso across the floor to reach his partner’s lips.

Since the majority of couples in the collection are anonymous, many of these images can also serve as ways for us to reflect on our own experiences of kissing. For some, a pair’s steamy embrace on a loveseat may bring back memories of the exhilarating nervousness that gives way to ecstasy. Others, meanwhile, might feel uncomfortable about how they may have once looked as ridiculous as the man in swim trunks thrusting out his tongue as he goes in for a French kiss.

“You start to put yourself in the photograph and wonder all these questions for which there’s no answers,” Ms. Levine said. “You’re supplying all the answers.”