How to Build a Modern Barn 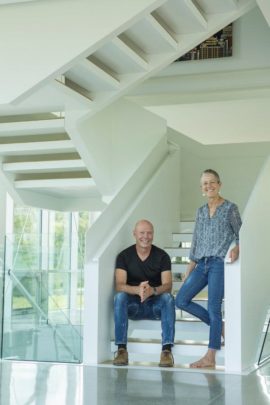 Three years ago, Marc and Lana Reuss found themselves happily untethered, in the enviable position of being able to make a new home for themselves almost anywhere they pleased.

They had spent the previous eight and a half years in Europe, where Mr. Reuss helped take a medical products company public. Ms. Reuss had retired from teaching. And their twin daughters had left for college back in the United States.

The couple, architecture buffs, had previously lived in and around Boston, where they had once owned the Big Dig House, a much-publicized dwelling made from reclaimed highway materials.

They liked the idea of returning to the northeast, but wanted a more relaxed, bucolic place. They weren’t sure exactly where, until they visited one of their daughters at Middlebury College in Vermont.

“We just remembered how beautiful Vermont was,” said Ms. Reuss, 58.

They also recalled a town about 60 miles southeast of Middlebury that offered not only natural beauty but a vibrant community with appealing stores and restaurants. “We knew that Woodstock was a really cool little town,” Ms. Reuss said.

In June 2016, they paid $210,000 for a 27-acre, forested lot outside Woodstock with enough elevation to offer long views of the Green Mountains. Then they began looking for someone to design their dream home and stumbled upon the website for Birdseye, an architecture and building company based in Richmond, Vt.

“One look at their portfolio and it was a no-brainer,” Mr. Reuss said. “They do spectacular architecture.”

The Reusses met with Birdseye architects Brian Mac and Jeff McBride over a beer at the Long Trail Brewing Company near Woodstock, hit it off, and got to work.

“I gave them a Lego model of what I wanted,” Mr. Reuss said. “Which is a little bit comical in retrospect, but they took it on board.”

The building blocks weren’t entirely inappropriate, Mr. Reuss pointed out, as the couple essentially wanted a “modern barn” with a simple form.

As Birdseye refined the design, however, it became clear that the architects weren’t content to build just any barn. “We were trying to give it more of a regional feel, in terms of how barns relate to the landscapes of Vermont,” Mr. Mac said.

Because the state’s undulating topography had historically encouraged many farmers to build bank barns — partially buried in a hill and accessible from two levels — Birdseye eventually decided to use a similar approach for the house.

Working on a grassy slope, they dug the basement into the hillside, keeping one end level with the gravel driveway to create a garage and subterranean game room. Above, they added a “concrete plinth,” Mr. Mac said, which holds a two-story structure with a gable roof, but also extends out into the landscape, beyond the house, with a deck, hot tub and firepit.

To limit the material palette, the architects designed the ground floor — which contains a living, dining and kitchen area, as well as a home office — as an open box of floor-to-ceiling glass and exposed steel.

The second floor, where there are three bedroom suites, has a different look and feel, with punched windows in a cedar facade.

Tying the levels of the 4,600-square-foot house together is a monumental, 16,000-pound, powder-coated steel staircase that was built off-site and craned into place before the roof was added.

Despite all the glass in a climate that gets frosty in winter, the house is designed to eventually to produce more power than it consumes. A geothermal system provides heating and cooling, and the Reusses plan to add a photovoltaic system for electricity in the future.

Birdseye, which built the house in addition to designing it, began construction in June 2017 and completed work two years later, for a total cost of about $2.8 million.

Mr. Reuss said the couple had invited bids from other contractors, some of which were less expensive, but decided to stick with one firm for design and construction to protect against errors. “The house is so precise, you can’t bury anything behind a wall,” he said. “At the end of the day, it was like they were building a home for a parent. They just took such excruciating care.”

As the project was wrapping up, Mr. Reuss accepted a job at a technology company near Boston. He and Ms. Reuss now split their time between Vermont and Massachusetts, but think of the house in Woodstock as their forever home.

“I call it a final home,” Mr. Reuss said. “Living there is almost overwhelming. It’s just — morning, noon and night — a source of tremendous pleasure.”