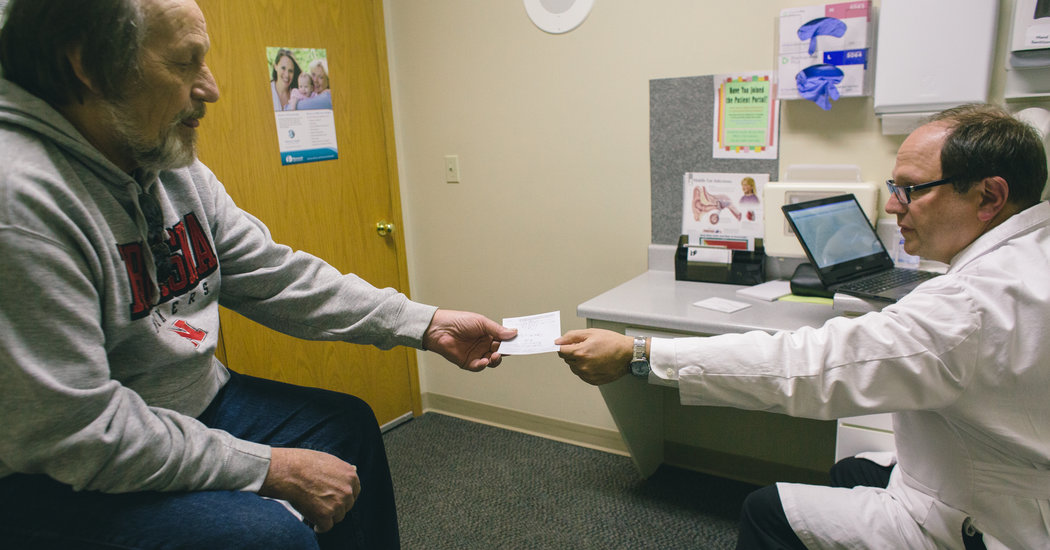 Three years ago this month, as alarms about the over-prescription of opioid painkillers were sounding across the country, the federal government issued course-correcting guidelines for primary care doctors. Prescriptions have fallen notably since then, and the Trump administration is pushing for them to drop by another third by 2021.

But in a letter to be sent to the Centers for Disease Control and Prevention on Wednesday, more than 300 medical experts, including three former White House drug czars, contend that the guidelines are harming one group of vulnerable patients: those with severe chronic pain, who may have been taking high doses of opioids for years without becoming addicted. They say the guidelines are being used as cover by insurers to deny reimbursement and by doctors to turn patients away. As a result, they say, patients who could benefit from the medications are being thrown into withdrawal and suffering renewed pain and a diminished quality of life, even to the point of suicide.

The letter writers form an uneasy alliance spanning differing positions on opioids — professors of addiction medicine as well as pain specialists, some patient representatives who have taken money from the pharmaceutical industry, and the former drug czars, from the Obama, Clinton and Nixon administrations.

Michael Botticelli, who served as the drug czar under President Obama and now leads the Grayken Center for Addiction at Boston Medical Center, said he signed the letter because “there has been enough anecdotal evidence to raise the alarm bells” about the misuse of the guidelines leading to pain patients losing effective treatment.

“The C.D.C. really does need a rigorous evaluation of this because we don’t know how big the problem is,” he said. “Minimally, we need some level of clarification on appropriate use of the guidelines.”

Specifically, the letter asks the C.D.C. to emphatically state that treatment decisions for these patients be left to their doctors.

“It is imperative that health care professionals and administrators realize that the guideline does not endorse mandated involuntary dose reduction or discontinuation,” the group wrote in the letter, which it also sent to members of relevant congressional committees.

The guidelines are nonbinding, but many of them have become enshrined in state regulations. Therefore, said Dr. Stefan G. Kertesz, an author of the letter who teaches addiction medicine at the University of Alabama at Birmingham, “it’s normal to say from the top: ‘This needs a clarification because we don’t want people hurt.’”

Others say the problem lies not with the guidelines, which urge non-opioid therapies as the first-line treatment for chronic pain, but with their misapplication.

“What the guidelines are being blamed for versus what they actually recommend are two different things,” said Dr. Thomas R. Frieden, who ran the C.D.C. when the guidelines were developed.

Experts in addiction medicine distinguish patients who need opioids for chronic pain from people addicted to the drugs: while some patients are physically dependent and will go into withdrawal if the drugs are withheld, the opioids help them function, despite severe pain.

“But just because you’re on a higher dose doesn’t mean you’re addicted,” said Dr. Daniel P. Alford, a professor who directs addiction medicine education at the Boston University School of Medicine, who signed the letter.

Addiction, he said, is “a behavioral maladaptation where the medication takes over their lives, and they continue to use despite negative consequences.”

The guidelines say doctors should discuss the costs of a high-dose regimen with pain patients and press for a prudent taper. They do not say those patients’ drugs should be summarily reduced. They advise doctors to prescribe opioids to new patients only for a short time, and with a daily dose below 90 morphine milligram equivalents. That recommendation has prompted many states and monitoring systems to impose a hard stop at that level for all patients except those with cancer or in end-of-life care.

“Who says that 90 is a magical threshold?” Dr. Alford asked. “There’s no good evidence. Yes, we should avoid escalating doses, but how do we treat people who are already on high doses?”

Dr. Frieden defended 90 M.M.E., as the measurement is known, as a responsible ceiling. For the vast majority of patients, he said, anything higher than that “is so dangerous as to not be worth the risk.”

Dr. Frieden said more doctors should get federal permission to prescribe buprenorphine, a lower-risk opioid drug that can effectively manage opioid dependence while treating pain, as an alternative to more dangerous painkillers.

(Dr. Frieden was charged last summer with groping a woman; he pleaded not guilty and the case is still pending.)

The letter to the C.D.C. echoes a November resolution by the American Medical Association, which protested the “misapplication” of the guidelines “by pharmacists, health insurers, pharmacy benefit managers, legislatures, and governmental and private regulatory bodies in ways that prevent or limit access to opioid analgesia.”

A central question is how many patients have suffered from their doses being reduced or from being taken off opioids entirely. A report by the inspector general at the Department of Health and Human Services estimated that in 2016 about 500,000 beneficiaries of Medicare drug plans had been getting prescriptions of 120 M.M.E. or greater for three months or longer — a figure that doesn’t fully capture the current affected population.

Accompanying the experts’ letter are testimonials by hundreds of pain patients detailing struggles in the wake of the guidelines.

The opioid prescribing rate has been falling since 2012, but the amount prescribed per person is still about three times higher than it was in 1999, at the beginning of the addiction crisis, according to the C.D.C. While overdose deaths because of prescription opioids have begun leveling off, deaths from illicit fentanyl and its analogues increased by more than 45 percent in 2017 alone, a phenomenon that the letter writers attribute in part to the crackdown on pain pill prescriptions.

Dr. John Brooklyn, who runs two large addiction treatment programs in Vermont, gave one example. A 61-year-old patient, disabled by a back injury, had been functioning well for years on 225 M.M.E., he said. Invoking the guidelines, his pain doctor started cutting his dose by 40 milligrams a month.

“When he was at 120 M.M.E.,” said Dr. Brooklyn, “he was in such severe pain that he was buying opioids on the street. He barely ate, lost 40 pounds, couldn’t pay rent and then turned to cheap heroin. His doctor continued to reduce his dose and, at 30 M.M.E., the patient called our program.”

Dr. Brooklyn put the patient on methadone, a type of opioid approved to treat addiction as well as to manage chronic pain. “It was like watering a dehydrated plant,” he said.

Dr. Joanna L. Starrels, an associate professor of medicine at Albert Einstein College of Medicine and one of the experts who helped draft the C.D.C. guidelines, said chronic pain patients are an especially fragile group. “Some with severe persistent pain are barely getting by,” she said. “They are sometimes homebound, unable to work or fully participate in most of the rewarding aspects of life.” Their rates of depression are high, she said, and they have few reliable treatment alternatives.

Research that looks at the effect of dose reduction on such patients is in its infancy, she said.

In fact the guidelines include a plea for research to evaluate their efficacy.

That the guidelines have had widespread impact is not in question. While a handful of hospital systems and states had adopted opioid prescription limits before 2016, the number of institutions have since shot up.

In its annual survey of hospital-based pharmacies last year, the American Society of Health-System Pharmacists asked about opioid monitoring for the first time. In preliminary results, 41 percent said they had done so and some cited the C.D.C. guidelines.

By the end of 2016, seven states had passed legislation limiting opioid prescriptions; by October 2018, 33 states had enacted laws with some type of limit, guidance or requirement related to opioids, according to the National Conference of State Legislatures.

Aetna, one of the country’s largest health insurers, placed a limit of 90 M.M.E.s per day on its members last year based on the C.D.C. guidelines, said Ethan Slavin, a company spokesman. The stricter daily limits “are part of our efforts to help reduce the potential for misuse and diversion of the drugs,” he said, adding that prescribers who believe higher doses are needed can seek special permission by consulting with Aetna’s experts.

A study last year found that insurers overall were not doing enough to increase access to alternative pain treatments, including therapeutic massage, acupuncture and non-opioid drugs.

The remedy to the problems detailed in the letter, she said, was to educate primary care doctors about how to provide “safe, compassionate, patient-centered tapers when medically indicated,” which can be a protracted, delicate process.

Dr. Kertesz acknowledged that tapering was a worthy goal. “But more typically what we are seeing,” he said, “ are people who report non-consensual tapers.”

FacebookshareGoogle+sharePinterestpin it
That Cuddly Teddy Bear Coat Is a MonsterNo Regrets: Movie Stars and ‘Housewives’ Circle the Red Carpet
Latest