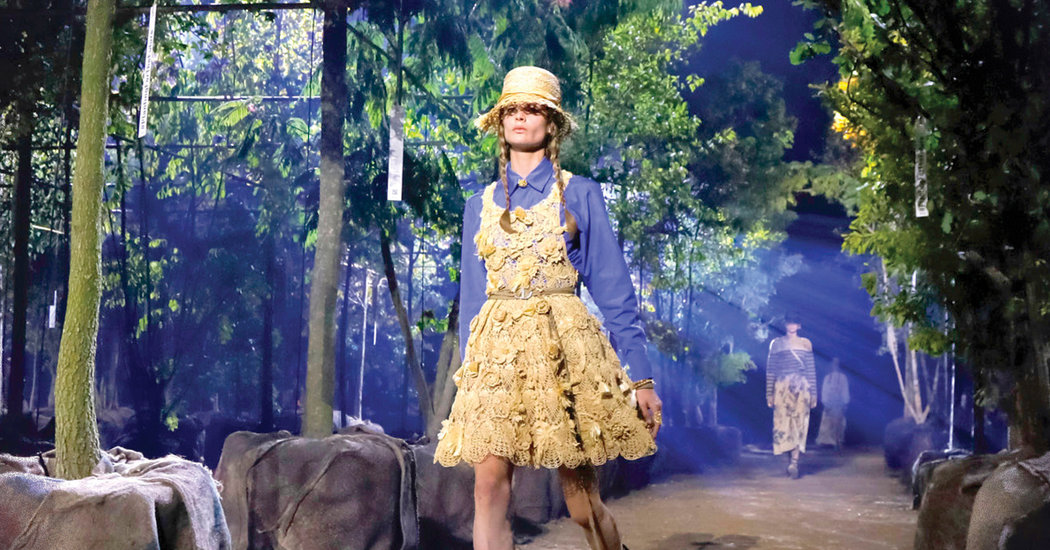 Of all the trends that emerged from fashion month, the four-week-long circuit of ready-to-wear shows in New York, London, Milan and Paris that ended last week, the one that trumped all others was neither a skirt length nor a color nor a borrowed reference. It dominated runways in every single city; it became so ubiquitous that it was almost a cliché.

Forget street wear. Sustainability was the hottest look of the day.

It started in New York on Sept. 10, when Gabriela Hearst unveiled what she said was the first carbon-neutral fashion show, which also featured upcycled prints from old collections. That was the same day the British Fashion Council introduced its Institute of Positive Fashion, which aims to create a coalition that will set standards for green businesses.

Two days later Gucci announced that its show, too, would be carbon neutral, and it would also offset all carbon emissions from its operations and supply chain.

In Milan, Missoni handed out little solar powered sun lights by Olafur Eliasson during its show, and the Green Carpet Awards capped off the city’s shows on Sept. 22, touting “the best in sustainable fashion.”

The next day Kering, Gucci’s parent group, committed to full carbon neutrality across all of its brands and to reduce its greenhouse gas emissions by 50 percent by 2025. The day after that, LVMH, Kering’s greatest rival, which had recently bought a stake in Stella McCartney (a company formerly a joint venture with Kering, which is famous for its green cred), held a news conference to discuss the progress of its LIFE program (LVMH initiatives for the environment, established in 2012) and achievements in the climate sphere. It was the first such public-facing event the group had held, though it had established its sustainability department in 1992.

By Paris, seemingly almost every brand was trumpeting its commitment to addressing the climate crisis.

Courrèges used its show notes to talk up its use of a new algae-based vinyl, “which uses 10 times less plastic” than the classic material, and the fact that it had swapped exotic skins for the skin of the pirarucu fish, a staple of the Amazonian diet whose skin would be otherwise discarded.

Alexander McQueen upcycled old laces and tulle from previous looks into its new collection. So did Alaïa. At Dior, the set was composed of more than 100 trees, all of which were bound for community gardens afterward. At Saint Laurent, the generators required to run the 414 spotlights that speckled the show were powered by biofuels. At Louis Vuitton, a note averred that the plywood set was bound for recycling.

“It’s turning into a competition,” said Burak Cakmak, the dean of fashion at Parsons, during a party at the end of the whole shebang hosted by Business of Fashion.

To wit: During the LVMH conference, Antoine Arnault, the head of communications for LVMH, had noted, “we prefer acts to pacts,” in what seemed a thinly disguised dig at the Fashion Pact, an initiative spearheaded by François-Henri Pinault, the chief executive of Kering, at the behest of the French president Emmanuel Macron.

Introduced in late August, the pact brought together 32 groups from high fashion and fast fashion — though not LVMH — to commit to implementing changes (of their own choosing) in order to address their environmental impact.

To understand what a dramatic shift this is, consider the fact that the Copenhagen Fashion Summit was the first major conference devoted to fashion and sustainability, and when it was established, in 2009, people were still confusing the terms “vegan” and “eco” and “organic.”

Even a few years ago, brands were reluctant to even utter the word “sustainability” for fear of being accused of greenwashing, and thought nothing of sacrificing fields of flowers for Instagram impact. Now, all of a sudden, they can’t stop talking about it.

As to why, well: “It’s evident that sustainability has become a very important issue not just internally, but externally, so we decided to become more vocal about it,” Mr. Arnault said in a phone call earlier this week.

And really, what’s wrong with that? Even if the motivations are mixed — sustainability as a blood sport! — even as brands are all careful to admit they are (to quote the hashtag on Victoria Beckham’s clean beauty line) #notperfect, the end result is positive.

To a certain extent. But while harnessing the self-interest of fashion at the service of the climate crisis is unquestionably beneficial, the fact it is happening in such a piecemeal manner is potentially confusing for shoppers. Aren’t carbon offsets just another way to keep overproducing? It’s great the materials are made from recycled fibers, but how do we recycle them now?

Does it not create a continued miasma of questions about the industry’s ability to put planet ahead of production?

Especially given the fact that fashion has a record of embracing issues, committing to guidelines ranging from the generic to the poetic that each company creates for itself, and then seeming to check the box and move on.

A year ago, for example, fashion was still wrestling with the repercussions of #MeToo and the need to ensure the well-being of models; brands were broadcasting their model protection moves. They may still be in place, but there was almost no discussion of that issue, and certainly, backstage at many shows in Europe, the concept of separate changing rooms for models seemed largely to have been forgotten.

In New York, the casting agent James Scully posted an Instagram story detailing reports he had gotten from models about fittings lasting up to 11 hours and castings that went on all night.

“I’m becoming distressed how much I’m hearing from girls that things are starting to slide backward,” he wrote.

Sara Ziff, of the Model Alliance, said in a recent email that she felt much the same. “For all the talk about sexual harassment and assault of models, and praise of the Model Alliance’s work and RESPECT program, a year later, the news cycle has shifted, and they still haven’t signed on,” she noted.

Then, last season, after multiple racial and cultural appropriation offenses by a variety of brands, diversity and inclusion were the focus of the day, leading to the most genuinely mixed catwalks fashion has ever seen. Yet this time around, save an announcement from Kering about its new chief diversity, inclusion and talent officer, there was little noise about the subject.

Indeed, after the BoF party, which was partly in celebration of a new issue that focused on diversity, Kerby Jean-Raymond of Pyer Moss wrote in an Instagram Story that for him it all smacked of accessorizing: “Homage without empathy and representation is appropriation. Instead, explore your own culture, religion and origins. By replicating ours and excluding us — you prove to us that you see us as a trend.”

The problem is, when it is up to each brand to establish its own guidelines and police its own behavior, accountability becomes a behind-closed-doors issue. Or at least it appears that way. Why should climate change be any different?

If real, systemic change is going to occur when it comes to fashion and sustainability (or fashion and inclusivity, or fashion and harassment) — and if it is to be trusted by people buying the products as more than marketing — then the industry as a whole needs to participate. Not with a variety of examples that ultimately obfuscate the goal more than illuminate it, but by agreeing on the best way forward.

By handing over the measurement of that to a consistent and disinterested third party, or group of third parties.

And with every fashion city at the table addressing the elephant in the room when comes to fashion weeks — the simple fact of their existence, in four countries, encouraging thousands of people to fly from country to country and then get into fleets of black cars and drive for many hours a day — rather than vying with one another to see who can snag the green crown.

It’s a complicated charge, unquestionably. Mr. Arnault pointed out that it is difficult to apply the same measures to a sportswear brand like Nike and a couture brand like Dior, and that is true.

It is also true that brands are built on the premise of distinguishing themselves and their points of view from one another. And that cities have a vested economic interest in maintaining the fashion week status quo.

But, as William McDonough, the co-author of “Cradle to Cradle: Remaking the Way We Make Things,” said, “If you wish to do ecosystem design, first you have to do ego-system management.” Then, maybe, everyone wins.

FacebookshareGoogle+sharePinterestpin it
Designed for Serenity, With Nature in MindThe Hardest Part of Home Schooling Was the Guilt
Latest