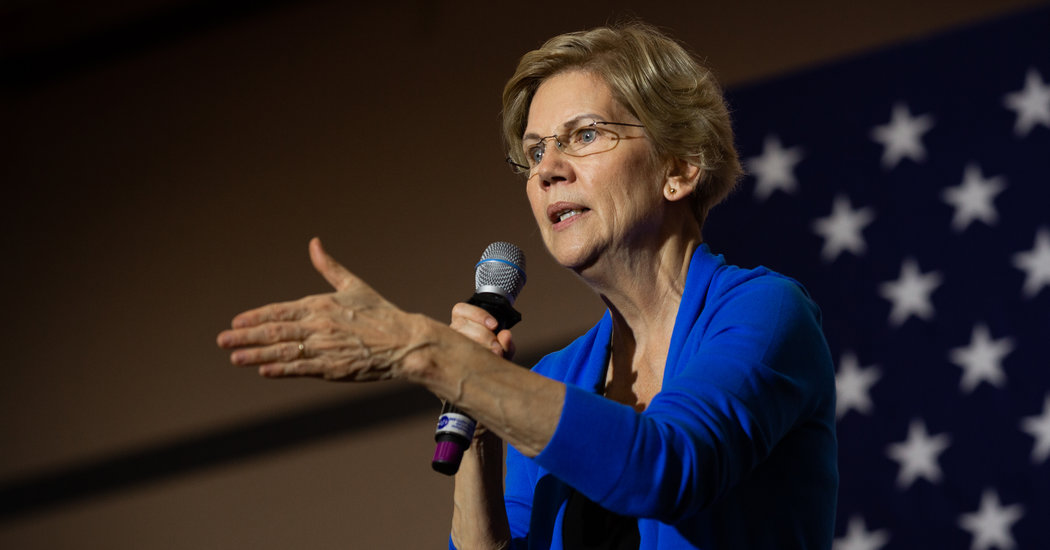 The plan represents a significant bet that enough voters will favor an approach that dismantles the current system and replaces it with “Medicare for all,” a government-run health insurance program. And it comes after decades in which Democrats have largely tiptoed around policy proposals that relied on major tax increases and Republicans ran on tax cuts.

While the proposal allows Ms. Warren to say she is not raising taxes on the middle class, it opened her to renewed charges that her plan is too radical to pass through Congress. It represents an extraordinary embrace of the tax system to redistribute wealth and re-engineer one of the pillars of the American economy, with measures that would double her proposed wealth tax on billionaires and impose new levies on investment gains and even stock trades.

“This debate has moved so far and so fast within the Democratic Party, it makes your head spin,” said Larry Levitt, the executive vice president for health policy at the Kaiser Family Foundation. “Ideas that used to be political third rails are now being proposed by one of the leading candidates for president.”

Ms. Warren, of Massachusetts, is not the only Democratic presidential candidate envisioning a large new government program funded by tax increases. Senator Bernie Sanders of Vermont, Ms. Warren’s top rival in the party’s progressive wing, is the architect of Medicare for all and has also proposed sweeping changes.

Together they are presenting a profoundly different vision from the one Democrats promoted as recently as the mid-1990s when President Bill Clinton declared in a State of the Union address that “the era of big government is over.” While President Barack Obama pushed through the Affordable Care Act and managed to bring down the number of uninsured, he preserved a major role for the private sector in the country’s health insurance system.

Under Ms. Warren’s plan, private health insurance — which now covers most of the population — would be eliminated and replaced by free government health coverage for all Americans. That is a fundamental shift from a market-driven system that has defined health care in the United States for decades but produced vast inequities in quality, service and cost.

Ms. Warren would pay for the new federal spending, $20.5 trillion over 10 years, through a mix of sources, including:

Beyond the $20.5 trillion total, she is also counting on states and local governments to contribute an additional $6.1 trillion to help pay for the system.

Like Mr. Sanders, Ms. Warren would essentially eliminate medical costs for individuals, including premiums, deductibles and other out-of-pocket expenses. But it is not clear if her plan would cover the costs of free health care for everyone. It relies on ambitious assumptions about how much it can lower payments to hospitals, doctors and pharmaceutical companies, and how cheaply such a large system could be run.

“We made different assumptions, because we didn’t think these kinds of assumptions were realistic,” said Linda Blumberg, a health economist at the Urban Institute, whose detailed assessment of Medicare for all found it would require $34 trillion in added federal spending.

As Ms. Warren has risen steadily in the polls, with strong support from liberals excited about her ambitious policy plans, she has been under pressure from top rivals like former Vice President Joseph R. Biden Jr. to release details about paying for health care. She has been asked over and over whether she would raise taxes on the middle class to pay for it, but had not answered directly until now.

Her lack of specificity became a vulnerability as the primary race heated up, especially because she had established herself as the candidate with a plan for everything. Democratic rivals like Mr. Biden and Mayor Pete Buttigieg of South Bend, Ind., who prefer building on the existing system of health coverage, have pointedly criticized her on the issue, with Mr. Buttigieg calling her “extremely evasive.” Two weeks ago, with no sign that the pressure would relent, she announced she would soon release her own financing plan.

“A key step in winning the public debate over Medicare for all will be explaining what this plan costs — and how to pay for it,” Ms. Warren wrote in her plan. To do that, she added, “We don’t need to raise taxes on the middle class by one penny.”

But whether such a detailed plan will end up as a strength or a liability is unknown, and represents a gamble for a candidate who has stirred doubts about her electability among establishment Democrats. Some in the party believe that concerns about income inequality and corporate greed have become such a powerful motivator that her stance will win her converts. Others say such a strong alignment with Medicare for all will haunt her if she gets to the general election.

“This is not a symbolic proposal,” Mr. Levitt said. “This is the most specific plan for Medicare for all that’s ever been proposed by a candidate.”

“Candidates often pivot to the center on issues in the general election,” he added. “This proposal will make it more difficult for Warren to do that on health care.”

For Ms. Warren to achieve her desired health care transformation, she would need to persuade Congress to pass far-reaching legislation, an enormous political challenge and a virtual impossibility unless Democrats win control of the Senate.

“The mathematical gymnastics in this plan are all geared towards hiding a simple truth from voters: It’s impossible to pay for Medicare for all without middle-class tax increases,” Kate Bedingfield, a deputy campaign manager for Mr. Biden, said in a statement. In an interview with “PBS NewsHour,” Mr. Biden said of Ms. Warren’s plan, “She’s making it up.”

Speaking to reporters in Des Moines, Ms. Warren rebuffed criticism of her proposal, saying: “Democrats are not going to win by repeating Republican talking points and by dusting off the points of view of the giant insurance companies and the giant drug companies who don’t want to see any change in the law that will bite into their profits.”

She said anyone defending the profits of the insurance and drug companies was “running in the wrong presidential primary.”

The Republican National Committee described Ms. Warren’s plan as a “fairy tale,” adding that it would have the effect of “bankrupting the country and hurting the quality of care.”

The comments sent a signal of how President Trump and Republicans would portray her: as a tax-and-spend liberal who wants to vastly expand the role of the federal government while abolishing private health insurance. Her plan’s price tag is equal to roughly one-third of what the federal government is currently projected to spend over the next decade in total.

Still, the idea of government-run health insurance excites many liberal voters. Mr. Sanders has long championed single-payer health care, and Ms. Warren has aligned herself with him on the issue.

A New York Times/Siena College poll released Friday found that about three-quarters of likely Democratic caucusgoers in Iowa supported creating a single-payer system, while about nine in 10 supported the creation of an optional government plan that any American could buy.

Ms. Warren’s proposal shows just how large a reorganization of spending Medicare for all represents. By eliminating private health insurance and bringing every American into a federal system, trillions of dollars of spending by households, employers and state governments would be transferred into the federal budget over the course of a decade.

Ms. Warren tries to minimize fiscal disruption by asking the big payers in the current system to keep paying. Her tax on employers is meant to replace the amount that companies now pay directly to health insurers. (Small businesses would be exempt if they are not currently paying for their employees’ health care.) She has also proposed that states pay the federal government what they currently spend to cover state workers and low-income residents under the Medicaid program.

But to help replace an estimated $11 trillion in health care spending that would be borne by American households over a decade — on premiums, deductibles and other out-of-pocket costs — Ms. Warren lays out a series of new taxes on corporations and wealthy people.

She would raise $3 trillion in total from two proposals to tax the richest Americans. She has previously said that her wealth tax proposal would impose a 3 percent annual tax on net worth over $1 billion; she would now raise that to 6 percent. For the top 1 percent of households, she would tax investment gains annually instead of when the investments are sold.

Ms. Warren is also counting on stronger tax enforcement to bring in more than $2 trillion in taxes that would otherwise go uncollected, as well as $800 billion in cuts to military spending. And she is banking on passing an overhaul of immigration laws — which itself would be a huge political feat — and gaining revenue from additional taxes paid by immigrants.

Ms. Warren’s plan would put substantial downward pressure on payments to hospitals, doctors and pharmaceutical companies. She expects that an aggressive negotiation system could lower spending on generic medications by 30 percent compared with what Medicare pays now, for example, and spending on brand-name prescription drugs could fall by 70 percent.

FacebookshareGoogle+sharePinterestpin it
After 25 Years, They’re Making it OfficialBlizzCon Is Today. Here’s Why Gamers Are Protesting It for Hong Kong.
Latest