El Espace is a column dedicated to news and culture relevant to Latinx communities. Expect politics, arts, analysis, personal essays and more. ¿Lo mejor? It’ll be in Spanish and English, so you can forward it to your tía, your primo Lalo or anyone else (read: everyone).

“I feel like La Virgen de Guadalupe is my drag mom,” said Valentina, the 27-year-old Latinx queen of Season 9 of “RuPaul’s Drag Race,” before kissing a botanica candle dedicated to the Mexican patron saint. This was one of the many moments in which she invoked her Mexican heritage on the show, sprinkling references to María Félix, mariachis and Catholic bodas throughout the season. Valentina’s longevity in the competition made her a Latinx fan favorite (she’s not the first Latinx queen to compete, but she had one of the most successful runs on the show), and many were disappointed to see her eliminated after she forgot the words during a lip sync battle.

But good news! She’s back — this time, in the next season of “RuPaul’s Drag Race All Stars,” which premieres Dec. 14. The performer, whose real name is James Leyva, also landed the role of Angel in “Rent: Live,” which will air on Fox on Jan. 27. During a rehearsal break, she talked with me about the challenges of being a Latinx drag queen, the “real tea” behind her elimination and the energy she brought to All Stars.

How did you get started in drag?

I’ve always kind of been doing drag. When I was little and I would be taking a bath, I would drape the towel over my body in ways that played with gender without me really knowing it — making it a gown or a train or a hat or a shoulder piece or a cape. In college, I started to study dance, music and theater, and play with makeup. Then, having watched “Drag Race” and really loving the idea of putting an outfit together, thrift store shopping, getting a wig and thinking of a drag name got me really excited about it. Before my “Drag Race” season, I had been doing drag for roughly a year.

Were your parents supportive? I feel like there’s still a lot of stigma in the Latin American community when it comes to drag or men taking on traditionally feminine traits.

I do remember my dad correcting my feminine behavior, whether it be too emotional or too soft or just too flamboyant. When I finally decided to come out, it was a shock to my parents that I was gay, which is really odd to me, because I was studying the performing arts, and when I was in middle school I loved Britney Spears. I loved watching telenovelas with my babysitters. I loved glamour, and I would always hang out with my mom when she was getting ready.

They’ve come around, but it took some time. Sometimes we want to have the support of our parents right away, but for someone like me, who is Chicano, first-generation, we have to have patience with our parents. Sometimes they are coming from really closed-minded religious backgrounds or from a different country with laws that didn’t protect them. We have to not be so judgmental. Sometimes it takes them a while to turn around and see the bigger picture: that we are happy, that we are deserving of love, that we are just like anybody else.

Last year, a lot of fans were disappointed by your elimination. You were doing really well and were a favorite to win. But then during a lip sync for your life, you forgot the words. What happened there? And what did you learn from that experience?

There is this notion like “Maybe she refused to learn it,” or “She was lazy,” or “She didn’t care,” but no. It was some other song, and then it was switched the day before. That night, I had to go home and memorize Ariana Grande’s “Greedy.” I didn’t have the lyrics sheet with me, so I had to learn it by ear, and write down the lyrics as I went. I stayed up until like 3:30, and I had to be up at 6. I tried to learn the song. Before I went to sleep, I knew the song. By the time I woke up, I didn’t know the song.

People don’t acknowledge the fact that we are busy working the entire time. We are not just sitting there learning songs in our free time, because there is no free time. And so by the time it came time to perform, I was in such a state of shock and I freaked out. That is the real tea!

It was very difficult for me to process all that at the time. But once I calmed down, I was able to realize that all of the drama and all of my trauma aside, this is an iconic moment in reality TV. People are going to remember me for that — and good. It’s a problem when they don’t remember you, baby.

You made it a point during your season to showcase your Mexican heritage. Should we expect the same during “All Stars”?

I can never deny my culture. Even if I give you a simple black dress with some simple hair, I am imagining María Félix walking down a long hallway in my mind. On my season, I made it a plot to reference things that maybe people didn’t know. I was name dropping people and things that I found so beautiful, like Mariachi Plaza in Los Angeles and María Félix and the bridal look with my mom.

My upbringing, coming from a Latin family and being first generation — that is a really big part of everything. I just got to work with the Latina goddess, my childhood icon, Thalía, who I grew up watching on “Marimar” and “María Mercedes” and “María la del Barrio” and “Rosalinda.” I worked with Gloria Trevi. These are people I grew up idolizing. It is such a blessing, because what I am aiming for with my art is to be part of Latin excellence.

Here are more stories to read this week.

In Alfonso Cuarón’s new film, “Roma,” he tells the story of his upbringing in Mexico through the eyes of the domestic worker who raised him. The “Gravity” director said he wanted to make “a kind of spiritual X-ray of my family, with its wounds and its sores.” Our critic A.O. Scott wrote that Yalitza Aparicio, who plays the domestic worker in the film, is “perhaps the screen discovery of 2018.” 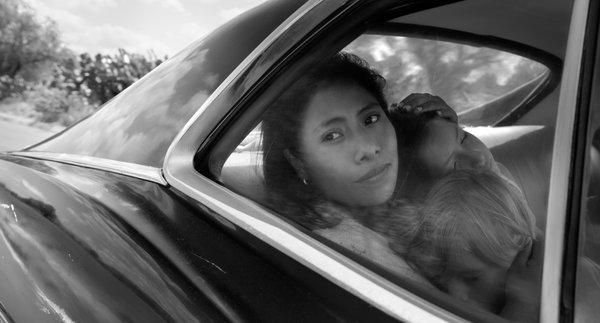 That’s what the director of the Smithsonian Latino Center said in a statement about why the Smithsonian is adding a gallery to the National Museum of American History dedicated to Latino experiences.

Julián Castro, the former housing secretary in the Obama administration, said on Tuesday that he was forming a presidential exploratory committee, the first step toward a potential bid for the White House in 2020.

Before working for the Obama administration, Julián Castro was mayor of San Antonio.CreditRodger Mallison/Star-Telegram, via Associated Press

A couple of weeks ago, the Times published an investigation into T.M. Landry, a private school in a small town in Louisiana whose administrators doctored college applications and lied about students’ hardships to get them into college. It was a disturbing story that showed the ways in which racial stereotypes influence college admissions and how pervasive the idea of survivorship bias, or the tendency to focus on successful outliers, is.

The deception took a toll on the students. Casey Gerald, whose lyric memoir “There Will Be No Miracles Here” traces his journey from an underprivileged upbringing to the Ivy League, wrote about how people like him (and me, and many of my friends) who “made it” become human collateral in the myth of American meritocracy. “We ‘success stories’ are driven from elementary school on to be perfect. To ignore whatever hardships we’ve endured, whatever loneliness or pain we feel in the new worlds we’re sent off to,” he wrote. “It’s time to break the silence.”

Do you have suggestions for El Espace? Want to receive it as a newsletter? Let me know: elespace@nytimes.com