Doctors: The Lesson of Impermanence 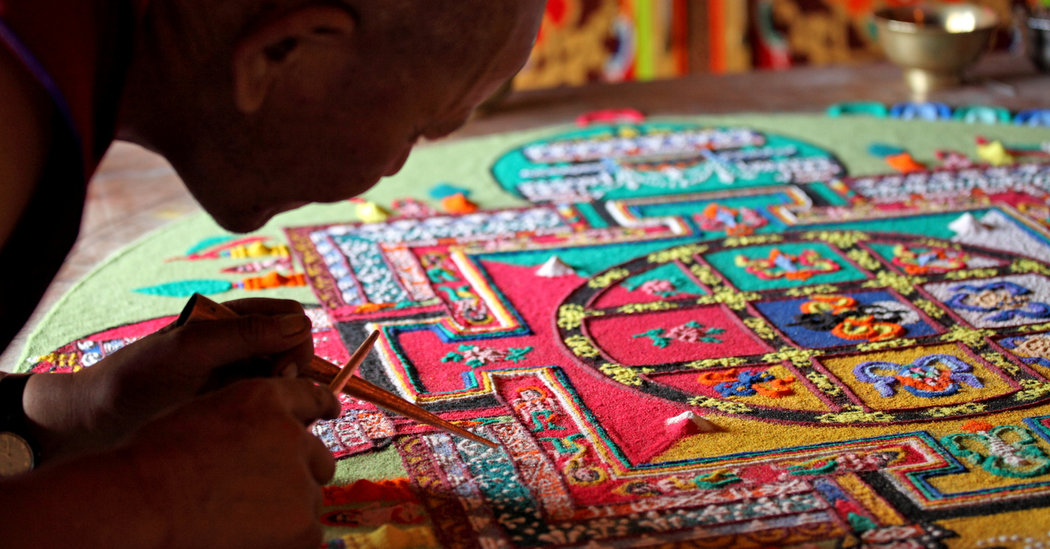 As a palliative care doctor, I spend much of my time face-to-face with pain and suffering, debilitating disease and death. When I began my training, I thought I was comfortable with the idea of mortality, and with the notion that fighting death at all costs wasn’t the sole purpose of medicine. But I hadn’t expected that the type of medicine I’d chosen to practice would require a strength and perspective that medical training hadn’t offered.

It was a chance encounter with a sand painting that helped me learn how to doctor patients I knew I would lose.

At the time, I was in the middle of my yearlong fellowship in hospice and palliative medicine, seeing patients at a county hospital in San Jose. I’d immersed myself in learning how to treat patients living with serious illnesses: end-stage heart failure, widespread cancer and devastating strokes. I’d learned how to help families anticipate what dying looks like. It had become second nature to talk openly with patients about the severity of their diseases, and to ask them how we might work together to maximize joy, meaning and comfort in their waning lives.

I hoped that projecting an acceptance of death and comfort with it might soothe my patients and their families. But I had grown progressively more anxious, and occasionally despondent. I didn’t understand why death had come for a 35-year-old mother of three with a rare and aggressive cancer, or why a marathon runner was dying after a sudden heart attack when he’d been a marathon runner.

My parents, both Hindus, had taught me that understanding death as inevitable is necessary to appreciate the meaning and beauty of life. But knowing this didn’t make it any easier to lose patients within days of meeting them.

One of my attending physicians noticed that I’d become more withdrawn, less punctual and occasionally distracted. “This is difficult work,” she told me gently, reminding me that I’d need to care for myself in order to care for my patients. I tried massages, therapy, hiking and meditating under the shade of Marin County redwoods. But when my sadness grew stronger, I longed for a place where I might find community among others searching for support. I found a Vietnamese Buddhist temple that was just a short drive from the hospital.

There I whispered the Sanskrit and Punjabi prayers I’d learned as a child. Sometimes I approached the altar and spoke quietly to the statue of Buddha: Help me find the strength to do this work. Show me how. Please, take away my sadness.

One evening, the temple’s main hall was unusually crowded. People had gathered around a group of Tibetan monks hunched over a table, where they were creating a sand mandala. Metal cups filled with sand of every conceivable color — bright pink, deep navy blue, silver, maroon and mustard yellow — lined one end of the table.

I remembered my father pointing out a photo of a mandala in a museum years ago, explaining that its circular shape symbolized both the cyclical nature of birth and death and the indestructible nature of the universe. Using small scrapers and metal funnels, the monks methodically piped precise amounts of sand to create an intricate geometric pattern. That first evening, they painted a flower with multicolored petals. By the next evening, the flower was surrounded by circles of deep blue and pink and rectangles of turquoise and gold.

The following Sunday morning, the temple was overflowing with people. We all looked on as the group of brightly robed monks surrounded the mandala and began to chant in low, guttural tones, their eyes closed and palms pressed together. I stood on my toes and craned my neck to glimpse the mandala, hoping to see it encased in glass.

Instead, I looked on in shock as one of the monks began to move a feathery brush over the mandala, swirling together the gold and the navy, the circles and the rectangles. He moved along the edges of the table, sweeping away his work just as methodically as he had placed grains of sand in the same space, transforming the mandala from pattern to pile. Hot tears filled my eyes, not only because the mandala was gone, but because the hands that had created it were content to let it go.

The Bhagavad Gita, which my father had read to me as a child, emphasizes that change is the law of the universe. The Vietnamese monk Thich Nhat Hanh reminds us that “impermanence does not necessarily lead to suffering. What makes us suffer is wanting things to be permanent when they are not.” Yet it was the sweeping away of a sand painting that helped me truly understand that change and impermanence are not just spiritual tenets but laws of nature — ones that I’d struggled against and had been taught to ignore throughout much of my medical training.

Just as I’d expected that the gorgeous mandala had been created in order to be preserved, I had also expected that my patient in her 30s should live to see her children graduate from college, that the marathon runner should have lived to run more races. I’d expected, partly as a result of my medical training, to change and control what wasn’t necessarily mine to change and control. How might I doctor my dying patients differently if I remembered that everything worldly — a painstakingly crafted mandala, a sky ablaze with color, our fragile human lives — is also temporary and subject to change?

Accepting that life is finite wouldn’t prevent me from drawing upon science to diagnose and treat disease, to use every tool available in medicine to alleviate suffering. But I wondered if it would make it easier for me to endure the inevitability of change and loss that both my patients and I would experience. Perhaps it could bring me solace to remember that just as my patients’ lives are temporary, so is their suffering.

I wiped my eyes as I looked upon the remaining heap of swirled sand, itself a thing of great beauty. The monks scooped teaspoons of sand into plastic bags, handing one to each of us. Through the bag, the sand felt both tough and soft, the bright blues and pinks particularly visible when I held it up to the light.

When I returned to the hospital the next day, I thought of the mandala as I sat with a breathless man my own age dying from lung cancer, and an agitated grandmother in the final stages of dementia. I would feel compassion for both of them, but I didn’t leave work that day consumed with grief, withdrawn and disengaged. By accepting my patients’ circumstances, rather than fixating on their inherent tragedy, I could focus instead on changing what I could: easing breathlessness and agitation, explaining hospice services to their despondent families.

Before leaving the hospital that night, I removed the bag of sand from my wallet, holding it up to the light as I have so many times over the past five years when I’ve needed to remind myself of the circularity of all things, of change as life’s only constant.

Sunita Puri is medical director for palliative care at Keck Hospital and Norris Cancer Center of the University of Southern California and the author of “That Good Night: Life and Medicine in the Eleventh Hour.”

FacebookshareGoogle+sharePinterestpin it
Who Needs a Ring to Propose When There Are Puppies and Paintings?It’s All About the Art
Latest