Designing a Home and a Marriage 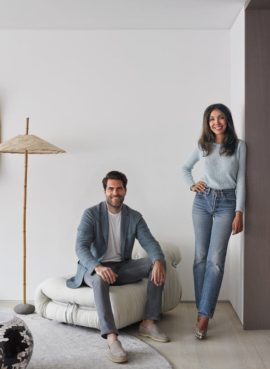 For Edward and Sally Yedid, designing a home was an essential part of building their relationship.

​In May 2015, when they happened to meet at a friend’s dinner party in Paris, he was a partner at the architecture and design firm Grade and was living in New York, and she was working as a product designer in London.

​“We sat next to each other,” said Ms. Yedid, 32, and discovered a shared passion for art and design. “That was that.”

They quickly found themselves in a delirious long-distance relationship, continually crossing the Atlantic to visit each other. “It was a lot of air miles,” Ms. Yedid said.

​As the weeks turned into months, they began dreaming of living together in Manhattan. That meant thinking about real estate. ​“We realized we were going to make this work,” said Mr. Yedid, 41. “So we started looking at apartments.”

​Mr. Yedid, a native New Yorker, was living in a one-bedroom apartment on the Upper East Side. But the couple wanted more space: They had already started talking about having children together and, as designers, they both relished the idea of a gut renovation.

​Five months after they met, they found a 2,100-square-foot duplex in a co-op building a block from Central Park, on the Upper East Side. “It hadn’t been touched since 1968, the year the building was built,” Mr. Yedid said, and it seemed to be crying out for an overhaul.

​They closed on the apartment in early 2016 for $2.3 million, a month after getting engaged. Then they got to work on the design.

​“I assumed that I would be running the show, because this is what I do,” Mr. Yedid said, referring to his profession. “But I learned very quickly that that wasn’t the case, and that Sally was going to be involved with all the minutiae.”

​Although they agreed on a lot, they also discovered they had some stylistic differences. “She’s more arty and quirky,” Mr. Yedid said. “I’m more streamlined and elegant in what I like.”

​After long conversations about the design details — down to the location and color of the light switches — they found the middle ground: a calm, pared-down design scheme awash in light grays and textural materials that could be combined with eye-catching furniture and art.

​They began construction that June and completely changed the layout of the space. On the first floor, they created an entrance gallery with a powder room behind a mirrored door; a large living and dining room; and a kitchen open to a family room with custom millwork panels and cabinetry, which can be closed off with hidden pocket and panel doors.

​A new sculptural staircase leads upstairs, where there is a master suite and a second bedroom with an en suite bathroom. Throughout, the Yedids sought to make the relatively low ceilings, which are just over eight feet, appear taller by using full-height doors and doorways.

​“We wanted to make it feel as tall as possible, so we didn’t use any crown or base molding,” Mr. Yedid said. Instead, “we used these three-quarter-inch reveals,” where the walls meet the ceiling, floor and millwork elements.

​The total cost was about $1.5 million, and the Yedids moved into their completed apartment that December.

“Sally’s mom was staying with us,” Mr. Yedid recalled, and one night “she heard water running.”

​There was no visible leak in their apartment, so Ms. Yedid went out to the hallway. “There was the old mail chute,” she said, “and there was literally a waterfall coming down it.”

​A pipe had burst above them, but the shut-off valve was in the retail store on the ground floor, which was closed. By the time the water was turned off, hours later, it was too late.

​The Yedids moved out for nine months as their apartment was demolished and then rebuilt with insurance money. While living in temporary rentals, they got married and continued to focus on the positives.

​For instance, after their three-month trial run in the apartment, they now had the opportunity to tweak some of the finishes. They adjusted the color of some woodwork and wrapped the family room desk and upper kitchen cabinets in cream-colored polyurethane leather, and the gallery closet doors in Ultrasuede for a softer look and feel.

​They also used the time to round out their collection of furniture and art. “We wanted an accumulation from our travels,” Ms. Yedid said, “so that each piece reminded us of a place we’ve visited or good times we’ve had” at flea markets, galleries and art fairs in cities like London, Paris, Venice and Miami.

​The couple returned to the rebuilt apartment — which will be featured in Grade’s book “New York Contemporary,” published next month by the Monacelli Press — in December 2017. Last February, they welcomed the arrival of their daughter.

​“Starting a project so early in the relationship was a trust thing,” Mr. Yedid said, noting that he learned the art of compromise along the way. Before meeting Ms. Yedid, he added, “there was no one to tell me when I was wrong.”