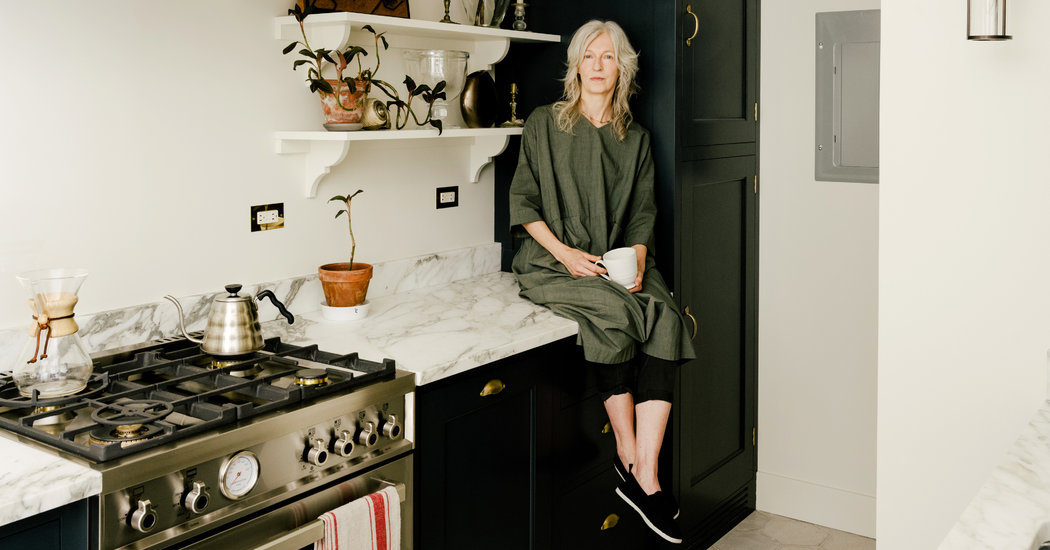 There’s a new trophy kitchen in town, and it looks like a very old one, with hand-painted cabinets in rich colors and dull brass hardware with an antique patina. Maybe it’s the “Downton Abbey” effect: the English scullery has been buffed up, ever so slightly, and shipped to America. Downstairs is now upstairs. The Aga range is optional.

Nearly 30 years ago, Tony Niblock and Katie Fontana, English designers who were then a couple, built a traditional Suffolk long house with reclaimed materials and an especially fitting kitchen.

Inspired by National Trust properties, they sketched out Georgian-style cabinetry, which is distinguished by clean lines and minimal detailing, had it made by a local joiner, and painted it themselves in their favorite Farrow & Ball color, Berrington Blue.

Instead of a laminate stage set, they wanted a kitchen, Ms. Fontana has said, “that wasn’t twiddly, that didn’t shout, ‘Look at me!’” and they guessed, rightly, that others might want the same thing.

Using their own kitchen as a showroom and a nearby former tannery as a workshop, they assembled ironmongers to make the patinated brass hardware and hinges, and woodworkers to turn the dowels for the drawer supports, calling their company Plain English.

By 1996, Mr. Niblock and Ms. Fontana had ended their romance, but they continued to run the business as partners, moving it as they expanded out of their home and the tannery and into a Georgian farmhouse with atmospheric outbuildings in Suffolk.

They were diligent about the details, using slot head screws and brass hinges, pulls and latches, and hand-painting the cabinetry instead of spraying it: dog whistles to those who notice such things.

Before long, Plain English was selling 250 kitchens a year, they said. Design folks lost their minds over the look, and it became shorthand for an aesthetic and an ethos: English bohemia, but cleaner.

This matched the artisanal, local and very expensive cookery of the sort practiced by Skye Gyngell, the chef at Spring, a farm-to-table restaurant in Somerset House. Ms. Gyngell is one of many culinary avatars to put a Plain English kitchen in her own home, underscoring its functionality to the aspirational amateur.

Competitors emerged, and Americans and Europeans waved pages from World of Interiors magazine, where Plain English advertised, at their contractors and carpenters, who endeavored to produce copies of Mr. Niblock and Ms. Fontana’s high-end, homespun fantasy.

“It’s shorthand for 100 people, like a Margaret Howell white shirt,” said Christine Muhlke, a food consultant and author, comparing the Plain English kitchens, which now start at $45,000, to the English clothing designer who makes understated schoolboy pieces, and musing on how the company became a brand for those who eschew brands.

“Only a design freak would know it’s a $300 shirt,” Ms. Muhlke said. “Yes, there is an implicit snobbery in that kind of extreme tastefulness, but there is something about the plainness and the level of high-quality construction that’s missing from a certain level of architecture. It doesn’t have that samey-samey Pinterest look.”

David Prior, the Australian co-founder of Prior, a member’s only traveler’s club, said his “most aspirational desire” is to have a Plain English kitchen in his West Village brownstone apartment. “I spend far too much time thinking about what a ‘scullery in Egg Yolk’ would mean in my life.”

Last year, Plain English opened a showroom on the parlor floor of a Greenwich Village townhouse, stoking the fire stateside.

Taavo Somer, the architect-restaurateur who rusticated a generation of New York City restaurants, installed his Plain English kitchen with a friend, setting the cabinets onto the uneven floor of his 1930s Tudor in Dutchess County, N.Y., using a process called scribing. (The cabinets have no kick plate, so they sit directly on the floor, hence the scribing, which gives them a sturdy, Shaker-simple quality.)

It allowed him to see how precisely the pieces were put together and note details he called poetic, like dovetail joints on the drawers.

Page Starzinger, a poet who lives in a one-bedroom apartment in Greenwich Village, also saw the poetry in the 28-year-old British company’s designs, and ordered blue-black cabinets (shade name: Railings) for her narrow galley kitchen.

In an East Village condo, a new Plain English kitchen sports a baby Aga, as adorable as a young royal.

It is the sort of expensive good taste also expressed by the high-end nursery food served at Rochelle Canteen in the Shoreditch neighborhood of London.

Rita Konig, an English decorator and editor, oversaw the Plain English color line this year, adding 12 hues that include Nicotine (a deep yellow), Burnt Toast (brown) and Mouldy Plum (what it sounds like).

In the half-century since the modern American kitchen promised an egalitarian, if gendered, space that would free the middle-class housewife from the drudgery of her chores with space-age technologies and materials like Formica, that arena has become ever more complicated and aspirational.

Last year, Americans spent $85.5 billion on their kitchens; this year, that figure is projected to rise to $90 billion, according to the National Kitchen & Bath Association, the industry’s trade group, which also reports that “transitional” styles, meaning a little bit of everything, are the most popular.

Sarah Archer, the author of “The Midcentury Kitchen: America’s Favorite Room From Workspace to Dreamscape 1940s-1970s,” noted how fast the American dream kitchens of the 1950s and ’60s disintegrated, and not just as an idea.

“Those materials did not age well,” she said. “We were supposed to be colonizing Mars, and now we’re fetishizing marble and polished brass.”

In luxury developments and lofts around New York City, the grim kitchens flaunt exotic materials like fumed oak, charred cedar, Crystallo quartzite and Nero Marquina marble in monolithic shapes that somehow all manage to look the same, seeming to anticipate the arrival of the caterer or the coke dealer.

In the financial district, in a building designed by Sir David Adjaye, the kitchen islands will be made from two rough slabs of stone, one cantilevered over the other — the only things missing are hunks of meat and some Argentine gauchos.

No wonder people are hankering for Mr. Niblock’s and Ms. Fontana’s export, or a facsimile.

For real cooks, it’s a place they can work in. For the culturally anxious, it’s a bulwark against creeping suburbanism, said Julie Carlson, a founder of Remodelista, a sourcebook for stylish kitchens for over a decade.

“Don’t you think people buying Plain English or having their kitchens copied is just the age-old American desire to co-opt the English look, with all the legitimacy and provenance that it bestows? The kitchens are the domestic equivalent of an impeccably tailored Savile Row suit.

“Also, they’re really good at the pantry, which we all romanticize. Isn’t a separate space for storage the ultimate kitchen luxury?”

And yet, Ms. Carlson added, importing whole kitchens handmade in Suffolk, while beautifully made and culturally on-point, “might start to feel problematic in this age of climate change. As we continue to focus on locally sourced goods and food, does it makes for a contradiction in the kitchen?”

Ms. Archer recalled the famous back-and-forth over an American dishwasher between Nixon and Khrushchev in 1959, when the Soviet leader snapped that Russian women did not need to be liberated by such capitalist tools.

“In the same way the kitchen was once a Cold War battleground, now it’s a climate-change battleground, where our consumption choices are brought to bear,” she said. “It’s not just meat or vegan. It’s, ‘Where are you getting those counters?’”

For English cooks, our tortured relationship with our kitchens elicits a chuckle.

After decades in this country, Serena Bass, the executive chef of Lido Harlem, is still confounded by showplaces with “the Botox-enhanced fields of marble. All the really serious English cooks I know have kitchens which are ‘working’ spaces full of the charming chips and wrinkles of time. They are cook’s kitchens rather than the kitchen where you invite guests to have a good look at the new millwork and self-closing drawers.”

One morning last month, Robert Kime, the Prince of Wales’s decorator, sat at the broad table in the window of the sun-drenched Plain English showroom. He and his design partner, Lady Gisela Milne-Watson, were in town for the expansion of his textile line to Chelsea Textiles on East 59th Street.

They would be celebrating that evening and were overseeing the flowers for the event, fiery purple and orange dahlias arrayed in Plain English’s parlor.

What makes a kitchen English? Not millwork and brass taps, Mr. Kime suggested, and then described his friend Alastair Langland’s kitchen, in an overstuffed bungalow in Hampshire, as an ideal of the form.

“It’s completely cluttered and hopeless,” he said admiringly. “Americans are a bit puritan in their kitchens. They want everything neat and tidy. They care too much about the toast crumbs.”

FacebookshareGoogle+sharePinterestpin it
What are the phases of the menstrual cycle?Popeyes Sandwich Strikes a Chord for African-Americans
Latest