After Her Illness Was Misdiagnosed as Madness, Susannah Cahalan Tackles Madness in Medicine 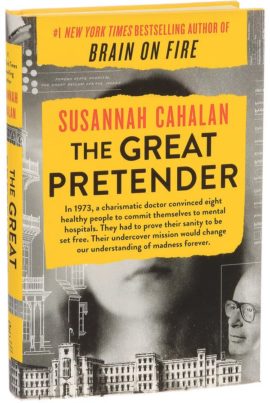 Ten years ago, Susannah Cahalan was hospitalized with mysterious and terrifying symptoms. She believed an army of bedbugs had invaded her apartment. She believed her father had tried to abduct her and kill his wife, her stepmother. She believed she could age people using just her mind. She couldn’t eat or sleep. She spoke in gibberish and slipped into a catatonic state.

Had it not been for an ingenious doctor brought in to consult on her case, Cahalan might well have ended up in a psychiatric ward. Instead, as she recounted in “Brain on Fire,” her best-selling 2012 memoir about her ordeal, she was eventually found to have a rare — or at least newly discovered — neurological disease: anti-NMDA-receptor autoimmune encephalitis. In plain English, Cahalan’s body was attacking her brain. She was only the 217th person in the world to be diagnosed with the disorder and among the first to receive the concoction of steroids, immunoglobulin infusions and plasmapheresis she credits for her recovery.

Cahalan’s condition is what in medicine is called a “great pretender”: a disorder that mimics the symptoms of various disorders, confounding doctors and leading them astray. “The Great Pretender” also happens to be the title of Cahalan’s new book, which comes out on Tuesday.

It, too, is a medical detective story, only this time at the heart of the mystery is not a patient or a disease but a member of the profession: David Rosenhan, a Stanford psychologist and the author of “On Being Sane in Insane Places,” a landmark 1973 study that, by questioning psychiatrists’ ability to diagnose mental illness, plunged the field into a crisis from which it has still not fully recovered.

Cahalan, 34, learned about Rosenhan six years ago, while on tour for the paperback edition of “Brain on Fire.” She was inundated with letters, hundreds a week, from desperate patients and their families, convinced that they too might have a neurological condition masquerading as mental illness. She was haunted by the idea that sheer luck had allowed her to escape a similar fate.

At a mental hospital in North Carolina where she presented her case, a doctor approached ashen-faced to say he had a patient who sounded just like her. “I remember thinking — we had just toured the place — Was it that person? Or that person?” Cahalan recalled. She later learned that the patient, a young woman, had tested positive for autoimmune encephalitis — Cahalan’s disease.

But the diagnosis came too late: The woman’s brain had been irrevocably damaged. “The doctor said, ‘She will operate as a permanent child,’” Cahalan remembered. Shaken by the story, she began to think of the woman as her “mirror image.”

In an interview at her home in Brooklyn, Cahalan talked fast, her vivaciousness proof, should any be needed, that she had suffered no such brain loss. Doctors had told her parents that she might “get back as much as 90 percent of her former self.” “I’m 100 percent!” she said. “Ten percent of my intellect would have been a devastating loss.”

“I realized that this was a larger issue,” she said. “It wasn’t just about autoimmune encephalitis, but about medicine in general — its limitations.”

Soon after her trip to North Carolina, she had dinner with a psychologist who mentioned Rosenhan’s study. Cahalan immediately looked it up. Published in Science, a leading academic journal, “On Being Sane in Insane Places” described a daring experiment: Eight “sane” volunteers presented themselves at mental hospitals under fake names, complaining that they heard voices — a classic symptom of mental illness. The goal was to test the validity of psychiatric diagnosis. “If sanity and insanity exist,” Rosenhan wrote, “how shall we know them?”

His answer was damning. All eight “pseudopatients” were admitted to hospitals, where they remained for at least a week and as long as 52 days. All but one received a diagnosis of schizophrenia. And although other patients in the hospitals suspected the pseudopatients were fakers — “you’re a journalist, or a professor” was a typical remark — the staff never caught on.

The study made Rosenhan an academic celebrity. Nearly 50 years later, it remains one of the most cited papers in social science.

“It was a bombshell,” said Andrew Scull, a historian of psychiatry at the University of California San Diego. “Not just newspapers but radio and television stations picked up this story about silly shrinks who couldn’t distinguish actors from real patients.”

Cahalan was fascinated. “I had an almost spidey sense,” she said. “I just wanted to find those pseudopatients.” After all, having a “great pretender” illness was a little like being a pseudopatient. And then there was her “mirror image.” How many other patients were out there, in psych wards where they didn’t belong?

A former investigative reporter at The New York Post, she knew how to chase down sources, and her efforts to identify Rosenhan’s volunteers form the backbone of “The Great Pretender.”

Rosenhan died in 2012, but Cahalan contacted his son, friends, students, colleagues and secretaries. At one point, she hired a private detective. She got access to Rosenhan’s notes and to a 200-page manuscript of a book he was supposed to write for Doubleday but never delivered.

Rosenhan had revealed that he was one of the pseudopatients. But the identity of the others was a mystery. According to his notes, one was a famous woman abstract painter; Cahalan looked into every well-known female artist from the period, only to hit a dead end.

At the same time, troubling discrepancies between Rosenhan’s papers and his study began to emerge. The study was stocked with alarming statistics drawn from the pseudopatients’ accounts of their hospital stays — contact with doctors averaged just 6.8 minutes a day; 71 percent of doctors moved on, “head averted,” when a pseudopatient addressed them. But Rosenhan’s notes didn’t back up the numbers.

Some of the discrepancies looked like sloppiness. Others seemed deliberate.

According to the study, the pseudopatients all presented with a single, identical symptom: They heard voices that said “empty,” “hollow” and “thud.” (This being the early ’70s, existentialism was in vogue; Rosenhan said he chose words to suggest a concern with the “meaninglessness of one’s life.”) Yet Rosenhan’s own medical file contradicted this claim. The psychiatrist who admitted him noted that Rosenhan had been having symptoms for months; that he found the voices so upsetting that he put “copper pots” over his ears to tune them out; and that he could “hear what people are thinking.” He also reported feeling suicidal. All told, his admission note conveyed a much more detailed and disturbing picture of mental illness than Rosenhan said the pseudopatients had presented.

Science had published letters from psychiatrists complaining about the study’s “methodological inadequacies.” One published a lengthy rebuttal. But Cahalan’s investigation was far more thorough. “It was becoming alarmingly clear that the facts were distorted intentionally — by Rosenhan himself,” she writes in “The Great Pretender.” Only the other pseudopatients could tell her what really happened.

In the end, she found just two, both former psychology graduate students at Stanford. One, Bill Underwood, now a retired software engineer in Austin, struck Rosenhan as so balanced that he doubted he could pass for a mental patient. (In fact, Underwood was admitted for nine days with a diagnosis of paranoid schizophrenia.)

“When you spoke to David, he had a way of giving you the impression that you were the most important person in the world at that time,” Underwood said in an interview. Until Cahalan contacted him, he added, it had never occurred to him that there might be problems with the study.

In Rosenhan’s study, Lando was reduced to a footnote, his data “excluded” on a technicality, allegedly because he’d “falsified aspects of his personal history” when he was admitted to the hospital.

In fact, Cahalan discovered, Lando, who would have been pseudopatient No. 9, was cut from the study because his experience had been positive.

Lando spent 19 days at an institution in San Francisco where patients passed their days as they pleased, and the staff didn’t wear uniforms. He attended group therapy sessions and went on a day trip to the beach. “The hospital seemed to have a calming effect,” Lando told Cahalan. Rosenhan’s comment on Lando’s notes was withering: “HE LIKES IT.”

“Maybe we could have emerged from this with an idea that there were institutions that were doing something right,” Cahalan said.

Instead, Rosenhan’s study gave the imprimatur of science to a growing antipsychiatry movement. Within a decade, dozens of institutions had closed and the number of patients in mental hospitals had dropped by 50 percent. The American Psychiatric Association rewrote its diagnostic manual from scratch, throwing out Freudian terminology and replacing it with rigid checklists meant to standardize diagnoses.

The problem was that most of these diagnoses had been created by doctors arguing in a conference room; there was no blood test for schizophrenia or manic depression. Despite decades of searching for genetic and environmental factors, we still don’t know what causes these disorders or even whether they are distinct diseases. As one psychiatrist puts it in Cahalan’s book, today, “Symptoms and signs are all we fundamentally have.”

Rosenhan isn’t the only social scientist whose work at the time has come under ethical scrutiny. His Stanford colleague Philip Zimbardo, the author of the famous “prison experiment,” in which a simulation involving students posing as “guards” and “inmates” spun violently out of control, was recently found to have coached the “guards” to behave more aggressively — tainting the study’s conclusions about prison’s inherent evil. But “The Great Pretender” leaves open the possibility that Rosenhan did more than distort and omit facts that undermined his thesis. Could he have invented the other pseudopatients out of whole cloth?

“This was one of the handful of the most influential social science papers produced since World War II and ironically it’s a fraud,” Scull said. “It’s possible, now that the book is coming out, that someone will emerge from the weeds and say, ‘Actually, my aunt was one of those pseudopatients.’ But even were pseudopatients to surface this point, the other evidence Susannah lays out is so damning that it wouldn’t transform things.”

Cahalan is more circumspect. “I believe that he exposed something real,” she writes toward the end of her book. “Rosenhan’s paper, as exaggerated, and even dishonest as it was, touched on truth as it danced around it.”

His message about psychiatry’s limitations helped her understand how her own ordeal could have turned out so differently from that of her mirror image.

“I was a medical marvel,” she said. “The more access I got to psychiatry, the more I realized that I was a marvel and that the average person isn’t and won’t necessarily get the outcome that I did. This was a recalibration for me, to put my experience in the proper context: that it was extraordinary.”

FacebookshareGoogle+sharePinterestpin it
What Could Come Between These Two Allies? A $100 Jar of Honey7 Must-Have Items for Your Next Ultra-Budget Flight
Latest