A Swimmer Saved by What She Lost 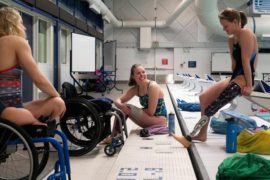 COLORADO SPRINGS — The last thing Morgan Stickney remembers from before her lower leg was amputated is lying on a hospital gurney waiting for the anesthesia to take hold. With a debilitating fear racing through her mind, she asked her surgeon to hold her hand. They talked about swimming until she passed out.

“It’s the last moment I had with two legs,” she said. “I was in the pool, the most happy place for me.”

Five years earlier, Stickney had dreams of becoming an Olympian. At 15, she ranked in the top 20 nationally in the mile, a freestyle event, and was a rising star out of Bedford, N.H.

But by the time she was wheeled into surgery last May, her Olympic dream had long since vanished. A relatively minor foot injury in 2013 had dragged her down a rabbit hole of five surgeries, numerous examinations and untold theories, none of which relieved — or even explained — the constant, excruciating pain that left her unable to walk by day and then, cruelly, stabbed her awake at night.

The only solutions offered by too many shrugging doctors were the prescription painkillers that, Stickney and her family knew, were turning a once cheerful teenager into a dreary, opioid-dependent 20-year-old pushing herself around her college campus on a kneeling scooter. 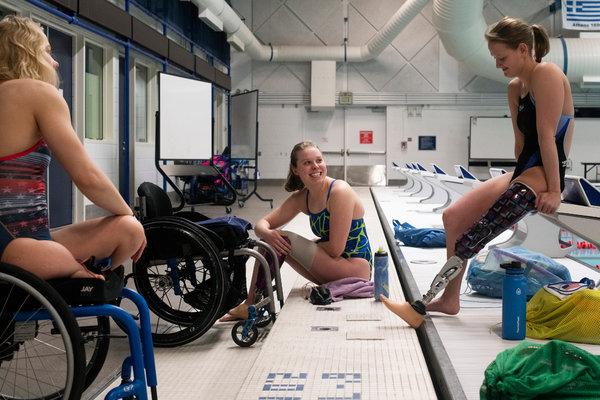 The worst moment came during a chemistry exam one day, when the only clear thought Stickney could summon was the note she wrote to her professor on the paper: “I’m too high to take this test right now.”

Not long after that, she made the agonizing, irreversible choice to have her lower left leg removed.

“Opioid addiction is an epidemic,” she said. “I didn’t want that to become my life. I want to have a family one day. I want to be able to do things with my life. This was the only solution anyone was giving me.”

Forced out of the pool by unrelenting pain, Stickney elected to have her leg amputated below the knee in a new medical procedure developed primarily by Matthew Carty, a specialist in limb restoration at Brigham and Women’s Faulkner Hospital in Boston.

The amputation procedure that Carty performs is designed to enhance the vitality and the possibilities for the portion of the limb that remains. Those possibilities include the potential of one day connecting the lower leg muscles to a futuristic robotic prosthesis currently in development across the Charles River at the Massachusetts Institute of Technology. The developers of the prosthetic hope it will operate much like a natural ankle and foot.

The operation is not yet perfect — Stickney will require at least one more surgical procedure — but it could forever change how amputations are performed. But in Stickney’s case, it has been transformative: Within weeks of her amputation last spring, Stickney, now 21, was back in the pool, swimming before she could even walk. By December, she had won the 400- and 100-meter freestyle races at the U.S. Paralympics national championships in Arizona. And while her experience has not been seamless, Stickney’s national team dreams, once abandoned, are flickering back into view.

Stickney’s physician, Matthew Carty. The amputation procedure that Carty performs is designed to enhance the vitality and the possibilities for the portion of the limb that remains.CreditGretchen Ertl for The New York Times

Nathan Manley, the coach of the resident program of the U.S. Paralympic team in Colorado Springs, where Stickney trains, said she was a serious contender to make the American team for the 2020 Paralympic Games in Tokyo.

Perhaps most important, she is feeling like herself again — the “nonnarcotic Morgan,” in her words, is having fun again.

When Stickney was a healthy 15-year-old in 2013, and suddenly ranked among the best swimmers her age in the country, she saw a different future for herself. But a few months later, while jumping next to the starting blocks before a race, she broke a sesamoid, one of two jellybean-size bones under her left big toe. Ordered to wear a boot, she was told that in eight weeks all would be well.

It never was. Four surgeries followed, plus the seemingly endless prescriptions for painkillers and anti-inflammatories: Oxycodone. Tramadol. Meloxicam. Diclofenac. Stickney continued to swim for her club team, and she even earned a scholarship at Biola University, a private Christian college about 20 miles southeast of Los Angeles. But within a month of her arrival there in 2016, the pain grew more intense.

Another surgery revealed she had shattered the other sesamoid bone in the same foot, and it was removed in a rare — and perhaps ill-conceived, her family now believes — procedure. (The Stickneys lauded the care that Morgan had received from some of her physicians, but also described what they now view as incompetence from others.)

After yet another summer spent recuperating from surgery in her room in New Hampshire, Stickney hobbled back to Biola and resumed her studies, powering through her classes in an opioid-induced haze. “I would take about five Oxy at once,” she said. “I went to class high. There were times I took so many pills and I was scared that I had overdosed.”

In the fall of 2017, a staph infection related to one of the surgical procedures surfaced in her ailing foot, and her temperature spiked to 104 degrees. Her parents arranged for a flight back to Boston, and Stickney was on an operating table the next day. Around that time, the word “amputation” was first mentioned. She cried through the night.

In 2017, fearful that she faced a future filled with pain and opioid addiction, Stickney, in glasses, quietly began to research amputations and prosthetics.CreditRachel Woolf for The New York Times

Eventually, though, she secretly began researching prosthetics, and through that process came to learn about Carty and his new procedure. Named the Ewing amputation, after Jim Ewing, the initial patient, the procedure is thought to be the first significant change to amputations in hundreds of years, Carty said.

During standard below-the-knee amputations, the muscles in the back and front of the lower leg, which naturally work in tandem, are shorn of their connection. In the new procedure, Carty uses material from the discarded portion of the limb to reconnect those tissues and the nerves that serve them. Doing so preserves the natural connection of the two muscles and the communication with the brain, he said, and, in most cases so far, allows them to work in concert as before.

“This is an experimental operation, and I would never represent to anyone that it is signed, sealed and delivered,” Carty said. “But I believe in my soul of souls that we are on to something much better.”

Carty said he had been thinking of a better way to do amputations when the Boston Marathon bombings occurred in 2013. He and his colleagues treated dozens of victims after the attack, many of whom required complex reconstruction of their lower limbs. The family of one of the victims that day, Gillian Reny, donated $2 million to establish the Stepping Strong Center for Trauma Innovation, which has helped finance Carty’s research, in collaboration with Hugh Herr, the M.I.T. scientist who is developing the robotic ankle and foot that Stickney and other amputees have tested in his lab. The Department of Defense has since provided an additional $6 million to help develop more sophisticated approaches to amputation.

On Wednesday, Jason Souza, a staff surgeon who specializes in amputations at Walter Reed National Military Medical Center in Bethesda, Md., performed the first Ewing amputation by someone other than Carty.

“The nice thing about this surgery is that it is a relatively straightforward surgery in terms of the technical demands, and it is relatively low risk,” Souza said.

Stickney’s coaches in Colorado said she had a solid chance to make the United States team for the 2020 Paralympic Games in Tokyo.CreditRachel Woolf for The New York Times

Before patients can elect to have the Ewing amputation, Carty mandates second opinions, along with visits to a pain specialist and to psychiatrists. Stickney had her surgery on May 14, a month before her 21st birthday.

Tony Stickney, Morgan’s father, initially opposed it, and even tried to dissuade his daughter as late as the day of the operation. But she was resolute.

“She wanted to be out of pain, and I didn’t know what else to do as a dad,” he said. “I knew we were losing her to the drugs. Dr. Carty’s surgery provided some hope.”

During the operation, Carty discovered that one of Stickney’s metatarsal bones — the five long bones in the foot — had died, probably as a result of the earlier staph infection. What he saw confirmed that any additional procedures to salvage the foot would have failed. Stickney’s decision to amputate only hastened the inevitable.

Complications led to a minor corrective procedure soon after. But within weeks, and with her father’s video camera rolling at a pool in Manchester, N.H., Stickney hopped to the edge, dived in and sliced through a lap of the pool before surfacing with her unmistakable smile brightening her face.

In that moment — her first venture into a pool in almost two years — a swimming career was reborn. At a para-swimming event in California in September, Morgan so dazzled scouts that she was invited to the U.S. Paralympic training program at Colorado Springs. She moved in last fall.

Stickney’s recovery is far from complete. She continues to endure phantom pain — a torment for many amputees — but Carty said that he believed the issue stemmed from a nerve complication, and from the fact that she does more extensive physical activity (training twice a day, six days a week) than any of his previous 12 patients.

He has told Stickney that a straightforward procedure should fix the nerve problem, but she said she would not consider it until after the Paralympics. If she makes the United States team, she has already asked Carty to join her in Tokyo.

That is the short-term goal. For the long term, Stickney has transferred to the University of Colorado at Colorado Springs. She is still on a track toward medical school, and perhaps even a career in limb restoration, just like Carty.

Because of everything she has been through, Stickney said, she would like to become a physician or a physician assistant.

“I think the world needs better doctors,” she said.

How Training for the Paralympics Became a Full-Time Job 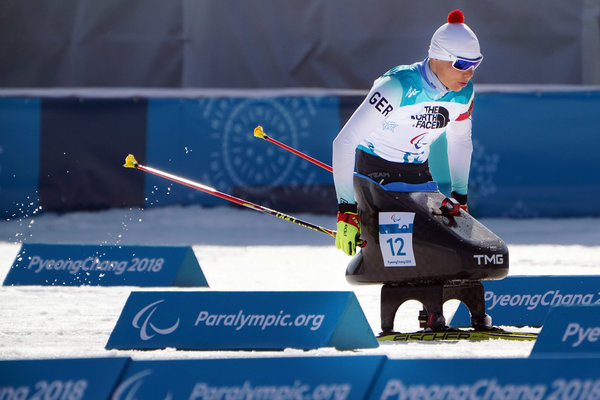 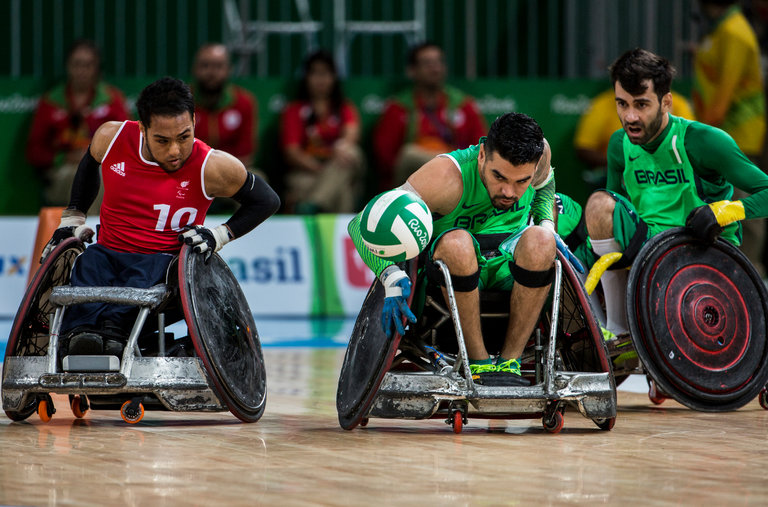 FacebookshareGoogle+sharePinterestpin it
Bigger, Saltier, Heavier: Fast Food Since 1986 in 3 Simple ChartsDrug Companies and Doctors Battle Over the Future of Fecal Transplants
Latest