9 Great Theater District Restaurants for Before or After Your Show 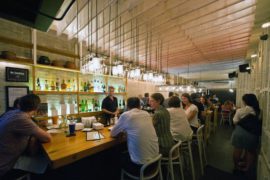 New York City is full of top-tier theater and restaurants, just not necessarily in the same area. Even before soaring rents killed off beloved locals like Cafe Edison and Azuri Kitchen, the average restaurant in the theater district generally prioritized expediency and atmosphere over quality food. But if you’re looking for a bite before or after a Broadway show, or are just passing through, you can eat well. This corner of Midtown Manhattan is home to some superlative restaurants if you know where to look, including an excellent Neapolitan-style pizzeria and one of the city’s finest Korean kitchens. And they know how to pace a meal so you won’t miss the curtain.

This cozy Hell’s Kitchen wine bar has everything you need and nothing you don’t. There isn’t a full sit-down menu, but the wine list is just long enough to make discerning drinkers happy, and a sterling selection of 30-odd American and European cheeses are available to mix and match. Then there’s the Pig’s Ass, a sandwich so famous that Casellula trademarked the name. It’s made with pork shoulder (also known as Boston butt) that’s braised with maple syrup and spices until it collapses, then topped with twangy Cheddar, pickles and a slice of ham for good measure. Order one after a show to recenter your spirit (Casellula is mercifully open until 1 a.m.), or stop by beforehand for a glass of wine and a wedge of pungent Taleggio.

For reasons of rent, rising numbers of international students and the absurd intricacies of New York restaurant logic, Midtown has become a hotbed of great Chinese restaurants in recent years. A block from the Port Authority Bus Terminal is China Xiang, which specializes in the spicy, often smoky, pickle-packed food of Hunan Province. Skip past the General Tso’s on the menu to the smoked meat and China Xiang’s specialties, and pay special attention to the stewlike casseroles and braised fish dishes. A bubbling pot of tender fish and ethereal tofu in a prickly chile sauce will stay with you. 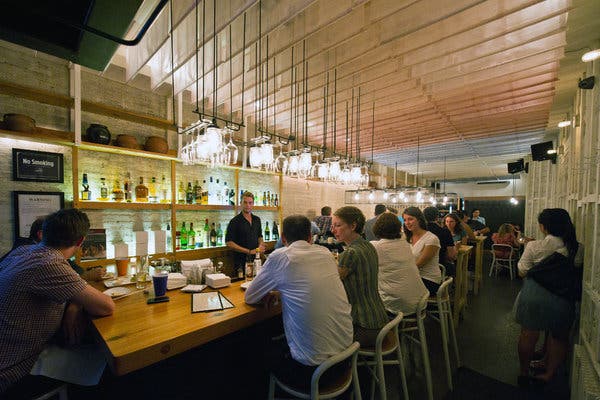 At Danji, and the Flatiron restaurant Hanjan, the chef Hooni Kim is cooking some of New York’s most exciting Korean food.CreditDaniel Krieger for The New York Times

To score one of the 36 seats at the chef Hooni Kim’s upscale restaurant, it’s essential to plan ahead and make a reservation. This is good, because it means you can’t use a looming curtain as an excuse not to appreciate some of the finest Korean cooking in New York. Mr. Kim’s spicy whelk salad and crème fraîche-dabbed ddukbokki are intricately flavored and great for sharing. Larger items, like a bacon “wet” kimchi fried rice (wet describes rice sauced with cloudlike scrambled eggs and spicy, porky gravy) or black cod poached in soy sauce, won’t leave you hungry after intermission.

With an interior that’s both dimly lit and aggressively shiny, Don Antonio is not the cozy, romantic Italian restaurant you’re looking for, but the pizza is very good. The chefs Roberto Caporuscio and Giorgia Caporuscio bake beautiful, leopard-spotted Neapolitan-style pies with poofy, almost creamy crusts that sag in the middle as they’re supposed to, and the housemade burrata and buffalo mozzarella are as pristine as can be. For that reason, the simpler your pie, the better. Don’t feel guilty about skipping the salads, which offer refreshment but little else. A meal at Don Antonio is fast enough that you can eat there before a show; depending on how long that show lasts, you may be able to squeeze in a late pie before the restaurant closes at 10:30 p.m.

The Theater District has changed in the last 50 years. Joe Allen, a Restaurant Row staple, has not, and it draws a crowd ripe for people-watching.CreditRobert Stolarik for The New York Times

The theater district has changed plenty in the last 54 years, but time stands still at Joe Allen, a 46th Street fixture since 1965. The restaurant’s exposed-brick interior is a collage of posters for Broadway flops, and there is plenty of people-watching available from your linen-covered bistro table. Joe Allen may not draw big names — think Marilyn Monroe and Hubert Humphrey — as often these days, but the crowd is a fun cross-section of theater nerds, journalists and tourists. Come here for the pudgy grilled burger with melted American cheese on a sesame bun, and an admirable plate of fries. It won’t rock your world, but it’ll hit all the right buttons, which sometimes is all you need before — or after — a show.

This spot is a specialist in la mian, Chinese noodles elegantly stretched by hand into chewy, ropy strands submerged in broth or stir-fried with meat and vegetables. The “dry” stir-fried noodles are a favorite here, especially the roast duck and tomato-and-egg variations, and at $12 for a hefty portion they’re the best fresh pasta deal you’ll find in the neighborhood. The kitchen, run by the chef Peter Song, moves quickly, so swing by if you need a quick meal. Factor in some time for Mr. Song to pan fry a plate of shengjianbao: The staff will warn you that an order of the Shanghai-style pork buns will take 15 to 20 minutes to slowly steam and sear. The wait for crunchy caramelized crust, pearly white bao dough and juicy nubbins of well-seasoned pork is worth it.

The menu at Los Tacos No. 1 is mercifully short: tacos, quesadillas and tostadas with your choice of pork, beef, chicken or cactus.CreditJeenah Moon for The New York Times

Some of the best tacos available in New York are made in Midtown, and you will find them at the Times Square location of this immensely popular Chelsea Market stall. The menu is blissfully concise: your choice of beef, pork, chicken or cactus paddle prepared in tacos, quesadillas or tostadas. The tortillas are made on-site, with pleasing roughness, geometric imprecision and, most critically, a genuine corn flavor. Once you add perfectly seasoned, generously seared bits of carne asada or al pastor, and salsas that don’t shy from heat, you will have a taco that can rival the versions that your friends in Los Angeles can’t stop talking about. (Take note: There are counters where you can devour your tacos, but no seating.)

Toloache is the kind of restaurant always worth keeping in your back pocket, and ideal for an early preshow meal.CreditKirsten Luce for The New York Times

If you’d like to sit down and take your time with your tacos, Toloache is worth keeping in mind, especially for a preshow meal, before the dining room gets too rowdy with the after-work crowd. Dishes that were once called “fusion,” like yellowfin ceviche seasoned with soy sauce and salsa macha, or a pork dumpling soup with lobster-yuzu broth, do feel a little dated these days. But that doesn’t mean they’re bad. The chef and owner, Julian Medina, has long has long embraced Mexico’s Indigenous practice of cooking insects, and his grasshopper tacos are a real treat, crunchy like burned bits of popcorn, and teased with chile and salt. The guacamole is no slouch, either.

The sushi chef Masatoshi Sugio made waves in New York’s sushi world when he opened the first Sushi of Gari on the Upper East Side in 1997. Breaking with tradition, Mr. Sugio built a brand on playful nigiri with unexpected sauces, searing and presentation: a touch of warm tomato to realign the thermal balance of fatty salmon, a poached egg to add richness to fluke. Purists may not approve. Other sushi fans point to Mr. Sugio as an American pioneer of less conventional approaches to the art form. Find out for yourself by making a reservation at the bar for an omakase meal, the best way to appreciate what this peaceful shelter from Restaurant Row has to offer. The omakase price will vary according to the length of your meal and expense of your particular dishes, but expect to pay $120 to $250 per person. Set sushi plates range between $35 and $55. 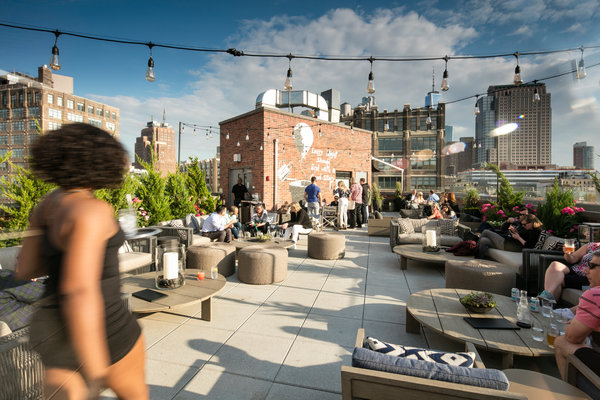 FacebookshareGoogle+sharePinterestpin it
JJ Johnson’s Rice-Focused Restaurant, FieldTrip, OpensVoyage to the Center of the World
Latest